A sexually active 45-year-old Hispanic male presented after falling out of a moving vehicle. The patient appeared to be in no acute distress, had a Glasgow Coma Score of 14, and smelled of alcohol. The primary survey did not reveal any obvious life-threatening injuries. 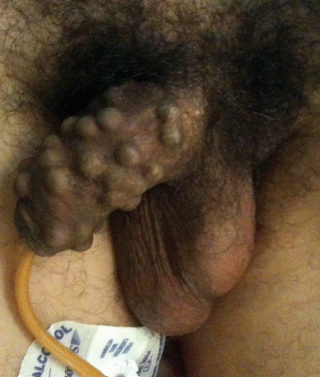 The patient was complaining of occipital, right shoulder, and left lower leg pain. Visual examination of the genitourinary system revealed multiple 1-cm subcutaneous nodules diffusely spread around the circumference of the penile shaft (Figure 1). The lesions were hard, nontender, and fixed to the underlying tissue. A Foley catheter was inserted to allow for strict monitoring of input and output.

This type of body modification, also known as pearling or genital beading, is a practice where an implantable material—be it spherical or rib shaped—is inserted into the subcutaneous tissue of the penis.1 Insertion of these foreign objects is done usually for increasing sexual pleasure for both parties and is aesthetically pleasing to some.

Pearling has been closely associated with certain Asian cultures having ties to the Japanese mafia, and the Yakuza, who allegedly placed 1 pearl under the skin of the penis to symbolize each year spent in jail.2 It is also a fairly common practice among older Filipino sailors, who are said to have learned the practice from Japanese seamen.

The implants come in several different materials such as silicone, nylon, Teflon, stainless steel, and titanium.2 Historically, genuine pearls were used—lending to the name pearling. Implants are inserted under the skin surface via small superficial incisions, most commonly on the dorsal aspect of the shaft. Stitches may be temporarily used to close the incision. Patterns range from a single implant, to a row of implants on the dorsal surface, to multiple implants randomly spaced around the circumference of the entire shaft.

This practice is not without consequences, including significant debilitation and mortality. The risk with penile implants is the same as when any foreign object is inserted into the body. Infection, rejection, inflammation, pain, and allergic foreign body response are all possible outcomes of such implantations. Possible long-term complications of pearling include scar tissue formation, which may cause chronic pain or erectile dysfunction. One unique complication of this practice is that the sexual partner may not find the penile modification pleasing. Recently, body modification has gained increasing popularity in the US prison system. Inmates, utilizing limited tools and who have little to no knowledge of penile anatomy, have attempted the procedure on their own—often requiring emergent surgical intervention.2

Upon further examination and questioning, the above patient was found to have over 30 beads surgically implanted into his penile shaft. The patient stated that pearling was popular in Los Angeles in the 1990s where he resided, and in particular, among his many Thai acquaintances. At 3 separate sessions, each about a week apart, a “doctor” in Chinatown inserted 10 to 12 pearls made of Teflon. The patient denied any post-procedure complications such as bleeding, infection, pain or erectile dysfunction, and reportedly engaged in sexual intercourse without problems within a week of the final session.

At the time of interview, the patient reported current sexual activity with his wife; which he stated was enhanced for both of them. The patient also stated that he had no future intention to remove the pearls and has even recommended them to friends.

In recent times, body modification has become increasingly popular and healthcare practitioners need to be aware of the different forms and associated complications that may arise. In the case of genital beading, a urologic consultation is recommended if there is any suspicion of injury to the urethra or related deep penile structures. ■