A 17-year-old white adolescent boy presented with an 8-month history of painful papules on both sides of his neck. Initially, he had thought that the lesions were a result of a bacterial infection related to poor personal hygiene. He had used an over-the-counter antibacterial cream on the lesions to no avail.

He used to shave hard once a day, trying to get as close a shave as possible, because his girlfriend preferred soft facial skin. With the development of the papules, he began to shave even harder, with a triple-blade razor, against the grain, and with the skin held taut with his fingers, in an attempt to remove as much dirt from the skin as possible. This, however, made the papules more numerous. 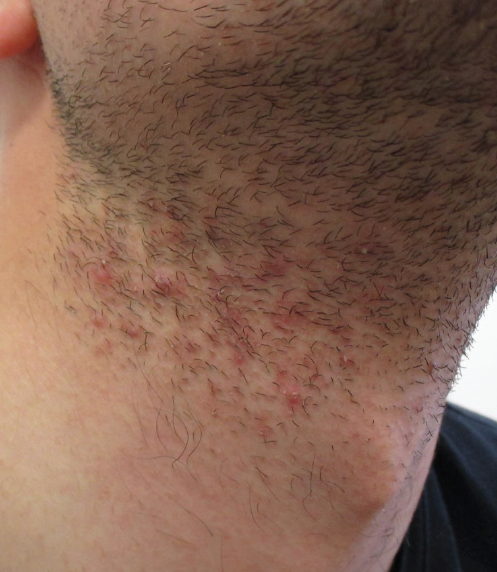 The teenager had not been exposed to anybody with an infectious disease, and he was not on any medication.

Pseudofolliculitis barbae is most prevalent in men of African descent, with a prevalence of 45% to 85%.4 It is also frequently observed among Hispanic, Middle Eastern, and other populations in whom tightly curled coarse hair is common.4 Approximately 3% of white males who shave their facial hair are affected.5 The condition occurs mainly in postpubertal individuals. In males, the peak age of onset is between 14 and 25 years, when hair growth is maximal.6 In females, the condition is more common during the postmenopausal period.6 Hirsute females may be affected at an earlier age.

Overenthusiastic close shaving by individuals with tightly curled coarse hair, the use of multiple-edge razors, shaving against the grain, and holding the skin tight when shaving are important predisposing factors.7 The condition often occurs when tightly curled coarse hairs are cut obliquely in the process of shaving, giving them sharp points. These sharp points produce pseudofolliculitis barbae by two mechanisms: extrafollicular penetration and transfollicular penetration.

A disruptive Ala12Thr substitution mutation in the 1A α-helical segment of the hair-follicle-specific keratin 75 gene (KRT75, formerly K6hf) results in a weakened companion layer of the hair follicle which, when associated with tightly curly hair shafts and close shaving, may increase the risk of pseudofolliculitis barbae.4

Histologic examination of the lesions may reveal invagination of the epidermis, intraepidermal neutrophils and phagocytic monocytes, hair shaft ensheathed with epithelial cells (pseudofollicle), microabscess within the pseudofollicle, and a foreign body giant cell reaction at the tip of the invading hair.6,8,9 Granulomas and fibrosis may occur.6

Clinically, patients affected with pseudofolliculitis barbae present with painful, pruritic, inflammatory papules and pustules surrounding hair follicles in an area where repetitive shaving has occurred.4,9 Patients may complain of ingrown facial hair and/or irritation after shaving. In males, sites of predilection include the neck, cheeks, submandibular areas, and submental areas.4 In females, the chin is the most commonly affected area.4

The papules usually are firm. They may be skin colored or, more commonly, erythematous or hyperpigmented. The lesions generally are grouped together and vary in size from 2 to 4 mm. Often, the hair can be seen within the papule.6 Pustules may be seen as a result of a sterile, acute inflammatory response to the entrapped hair or secondary bacterial infection.5

The diagnosis is mainly clinical. The use of epiluminescence dermatoscopy facilitates visualization of loops of hairs exiting and reentering the skin corresponding with the sites of individualized papules.7

Treatment options include discontinuation of shaving, proper hair removal techniques (including special “beard bumps” razors), medical management, and permanent hair removal. Shaving or plucking should be avoided if possible. The beard can be groomed with scissors or electric clippers.5 The latter have a protective gap between the blade and the comb; clipping the hair above the skin surface often results in improvement.6

For those who desire to continue shaving, modification of shaving practices is necessary. Before shaving, the beard area should be washed with warm water using a washcloth or polyester web sponge in a circular motion for a few minutes, which will help to release embedded hair shafts.5 The application of a highly lubricating shaving cream or gel for a few minutes prior to shaving helps to soften the hair, thereby reducing the formation of sharp hair tips with shaving.5 Shaving should be done with a clean, sharp razor, with the skin in its relaxed state, and in the direction of hair growth.4 Patients should be advised against the use of multiple-edge razors. Maintaining beard hair at 0.5 to 1 mm with an electric razor may prevent both extrafollicular and transfollicular penetration.4

Application of eflornithine results in a reduction of hair growth in the area where the medication is applied. Eflornithine works by inhibiting ornithine decarboxylase, an enzyme involved in hair cell division.6,9 The medication can be used as an adjunct to other depilatories and to laser hair removal.10

Laser treatment has become the gold standard for permanent hair removal and should be considered in refractory cases.10 Lasers remove hair by way of selective photothermolysis of follicular melanin (chromophore).11 Several lasers such as ruby (694 nm), pulsed alexandrite (755 nm), diode (800 nm), and neodymium:yttrium-aluminum-garnet (Nd:YAG; 1,064 nm) have been used with success in this regard.1,11 In order to be most effective and safe, the laser energy must be absorbed primarily by the hair follicle, with limited influence on the surrounding tissues.11 In general, the darker the skin color, the greater the risk of epidermal burns; Nd:YAG and diode lasers are considered ideal for dark skin types.9 Therefore, selection of the correct laser and laser parameters must be individualized. n

11. Emer JJ. Best practices and evidenced-based use of the 800 nm diode laser for the treatment of pseudofolliculitis barbae in skin of color. J Drugs Dermatol. 2011;10(12 suppl):s20-s22.