A 2-year-old girl presented with a chief concern of the hematologic abnormalities of anemia and thrombocytopenia. The girl had been born to consanguineous parents (first cousins) from the Republic of Yemen. Her past medical history was significant for hydrocephalus with placement of a ventriculoperitoneal shunt, bilateral blindness resulting from optic atrophy, and hepatosplenomegaly that had been detected at 1 year of life. 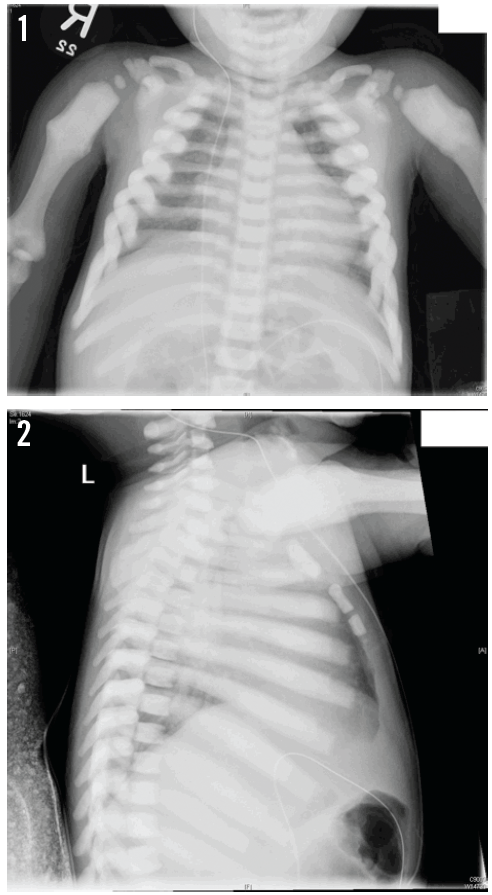 Radiographs were ordered. On the anteroposterior view (Figure 1), the visualized osseous structures demonstrated diffuse, chalky, increased density. The callus deformities of both proximal humeral shafts may be suggestive of old fractures. On the lateral view (Figure 2), the vertebral bodies demonstrated a “sandwich” appearance, with increased endplate sclerosis.

What is the cause of these radiographic abnormalities?

Based on these findings, the child received a preliminary diagnosis of osteopetrosis, a hereditary disorder in which pathologic alteration of osteoclast resorption results in the thickening of cortical and lamellar bone.1 The diagnosis was confirmed with genetic testing, the results of which revealed an autosomal recessive, homozygous mutation of the T-cell immune regulator 1 gene, TCIRG1.

Osteopetrosis is variably referred to as marble bone disease, owing to the diffuse thickening of bony structures, and Albers-Schönberg disease, after the German radiologist credited with the first description of the condition in 1904. The thickening does not strengthen bones, but instead osteoclast dysfunction leads to weak, brittle, fracture-prone bones that heal poorly. The severe infantile forms of osteopetrosis are associated with diminished life expectancy, with most untreated children dying in the first decade of life as a complication of bone marrow suppression.2

Akshat Jain, MD, is an instructor in the Department of Pediatrics at Hofstra North Shore LIJ School of Medicine in Hempstead, New York, and a fellow in the Hematology/Oncology and Stem Cell Transplantation programs at the Steven and Alexandra Cohen Children’s Medical Center of New York in New Hyde Park.