Painful Mass in the Arm of a Young Man 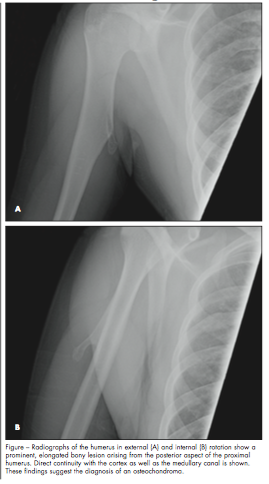 A 20-year-old man with a history of 22q11.2 deletion syndrome and tetralogy of Fallot repair was concerned about a painful mass in his right upper arm.

The patient first noticed the mass when he was in middle school. Within the past few months, it had enlarged and was now painful. A review of systems was otherwise normal; specifically, the patient
had no fever, chills, night sweats, or weight loss and no history of trauma.

Physical examination was remarkable for a tender, fixed, hard lump in the proximal humerus. The overlying skin was not inflamed. The patient had full range of motion at both the elbow and shoulder joints, with normal neurovascular function of the distal upper extremity.

The patient was referred to orthopedics for treatment.

The lesions can be sessile or pedunculated, frequently involve the metaphyseal region of the bone (specifically the distal metaphysis of the femur or the proximal metaphysis of the tibia, fibula, or humerus), and point away from the adjacent joint.2,3 Solitary osteochondromas, such as the one in this patient, are composed of both cortical and medullary bone with a cartilage cap. A definitive diagnosis of osteochondroma can be established when it demonstrates direct continuity with the cortex as well as the medullary canal (see Figure). The osteochondroma in this case is a slightly atypical presentation in that it is more diaphyseal than is commonly seen.

Osteochondromas are considered developmental lesions that likely arise from an area of bone where the epiphyseal cartilage abnormally separates from the growth plate.2 A literature review revealed no known association between 22q11.2 deletion syndrome and osteochondromas.

In general, osteochondromas are asymptomatic and often detected incidentally as a painless mass. Pain may occur, especially in the patient with an associated fracture or other complication. Diagnosis can usually be made on the basis of the characteristic radiographic features on plain films.

CT and MRI scans are helpful in assessing sessile lesions or awkwardly located lesions, such as those near the spine. When there is concern for malignant transformation, ultrasonography and MRI are the best imaging modalities for measuring the cartilage cap, which if thickened greater than 1.5 cm is suggestive of a chondrosarcoma.2

In addition to fracture, potential complications of osteochondromas include cosmetic or bony deformity, neurovascular compromise, bursa formation, and malignant transformation.2 Subscapularis tear and quadrilateral space syndrome—a condition in which the axillary nerve and posterior humeral circumflex artery become entrapped in the quadrilateral space—is a rare complication.3,4 Malignant transformation occurs at a rate of about 1% for solitary osteochondromas and 3% to 5% for multiple hereditary exostoses.2

Observation alone and consistent follow-up is the treatment of choice for asymptomatic or minimally symptomatic lesions.2 Surgery is indicated when the lesion is painful or when it is accompanied by a fracture, cosmetic deformity, limitation in range of motion of the limb or joint, sudden increase in size, compromise of the neurovascular structures, or concern for malignant transformation. Continued surveillance is recommended because of the risk of recurrence, which is about 2%.2