A 62-year-old man presented with a raised asymptomatic growth on his upper back that had been present for approximately 2 years and that had been slowly and progressively increasing in size.

He had been experiencing difficulty with dressing because the lesion was rubbing against his clothing.

Diagnosis. A clinical diagnosis of cutaneous horn was made. An excisional biopsy was performed. Histopathologic examination of the biopsy specimen revealed hyperkeratosis and parakeratosis in the epidermis with atypical keratinocytes extending to the dermis. These biopsy findings were in keeping with a diagnosis of cutaneous horn overlying a squamous cell carcinoma in situ.

Overview. Cutaneous horn, also known as cornu cutaneum and cornu humanum, is a clinical diagnosis referring to a conical hyperkeratotic protrusion from the skin that resembles a miniature animal horn.1,2 The horn is composed of compacted keratin.3 A cutaneous horn differs from an animal horn by the absence of an axially positioned, well-formed bone.2,4 The base can be crateriform, flat, and nodular and may overlie a benign, premalignant, or malignant skin lesion.5 As such, the significance of the lesion is not the horn itself but rather the underlying lesion. The first documentation of cutaneous horn was in the 1588 London exhibition of an elderly Welsh woman who was displayed commercially as an anomaly of nature.6 Everard Home, a London surgeon, was credited with the earliest medical description of cutaneous horn in 1791.7 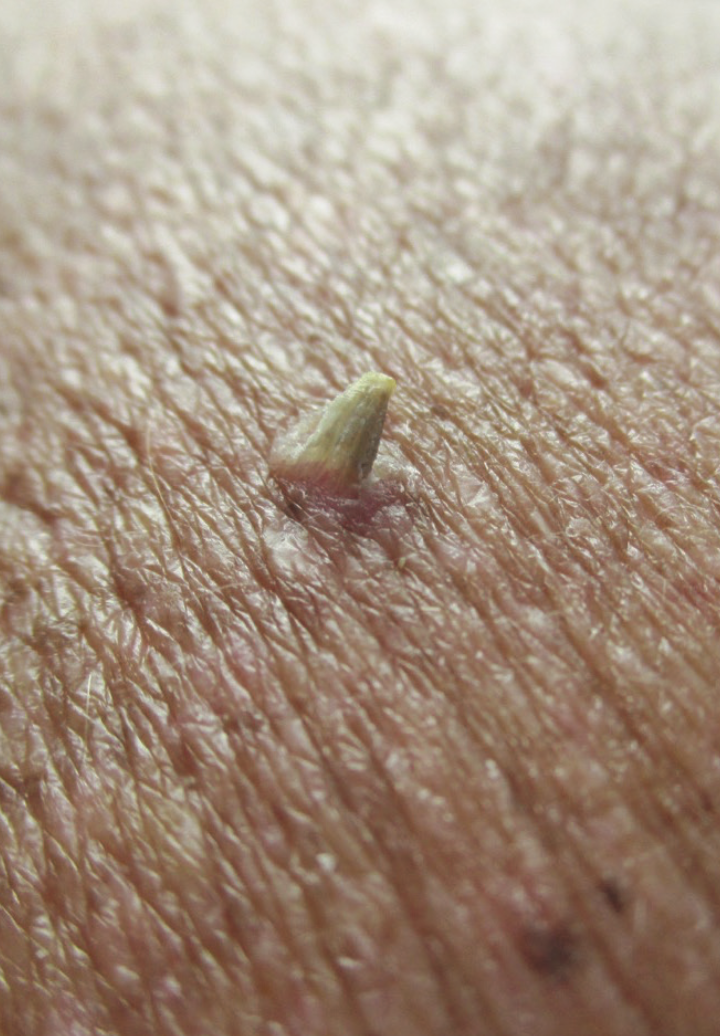 Epidemiology. Data on the prevalence and incidence of cutaneous horns are lacking.8 The condition is most frequently seen in individuals older than 50 years, with a peak between 60 and 70.5 Rarely, children and adolescents may be affected.9 The condition is much more common in fair-skinned individuals.3,10 The sex incidence is approximately equal, although there is a higher risk of the lesion being malignant in males.2,11 Predisposing factors include sun exposure (most common), chronic irritation, trauma, burn, radiotherapy, and human papillomavirus infection.2,12-14

Histopathology. Histopathologic examination of the keratotic mass shows hyperkeratosis and parakeratosis. Acanthosis is often noted. The base of the mass can have a wide assortment of histopathologic findings from benign to premalignant to malignant.10

Clinical manifestations. Typically, a cutaneous horn presents as a conical protrusion from the skin surface.5 The lesion is usually asymptomatic unless it is traumatized with resulting pain and inflammation at the base. The color varies from white, yellow, brown, to gray.10,21 The size may vary from a few millimeters to several centimeters.9 Lesions up to 38 cm have been reported.21 Typically, the height is at least half of the base diameter.9 The consistency is firm to hard. The shape can be conical, pointed, cylindrical, corrugated transversely or longitudinally, or curved like a ram’s horn.8,9,11 The base of the horn may be flat, crateriform, or nodular.11 Sites of predilection are the sun-exposed areas such as the face, scalp, ears, neck, shoulders, forearms, and dorsa of hands.5,8,9,14 The lesion, however, may develop in sun-protected areas such as the penis, groin, and nasal vestibule.8 Cutaneous horns are usually solitary, but multiple lesions have been reported.13

Diagnosis. Cutaneous horn is a morphologic diagnosis. An excisional biopsy including the base of the lesion should be performed to confirm the specific diagnosis of its base.

Complications and prognosis. Cutaneous horn can be disfiguring and socially embarrassing if the lesion affects a visible area such as the face.23 Patients with lesions on the trunk and extremities may have difficulty dressing. The cutaneous horn, if sharp enough, may cause body injury. Traumatic breakage of the horn, though rare, may occur.13 When present on the penis, it may interfere with sexual intercourse. More importantly, a cutaneous horn can harbor malignancy; this is especially so if the lesion is on the penile area.14,24

The prognosis varies, depending on the underlying pathology of the lesion.

Treatment. Treatment depends on the underlying etiology. Surgical excision is the treatment of choice.2 For benign lesions, excisional biopsy is both diagnostic and therapeutic. If malignancy is suspected, excision should be done with a wide margin of safety. If malignancy is present, margins should be assessed for complete excision.23 Patients with malignancy require regular follow-up to screen for recurrence.