A 79-year-old man presented to an outpatient clinic for evaluation of an extensive erythematous rash containing pustules and open sores across his left shoulder, chest, and back. The rash was within the C3 through C5 dermatomes and did not cross the midline of the chest and back. The cap of the left shoulder was involved without an extension down the left arm. The patient did not report any pain associated with the lesions. The patient’s caregiver had been cleaning the wound with alcohol, water, and antibiotic cream.

History and physical examination. The man’s relevant medical history included diabetes, chronic obstructive pulmonary disease, a 56 pack-year smoking history, previous fall, and herpes zoster (HZ) vaccination. He denied any shortness of breath or chest pain. The patient was afebrile with vital signs within normal limits, and he appeared alert and was in no acute distress. Various superficial abrasions and ecchymoses were present on his chest and arms as a result of a fall within the past 2 weeks. 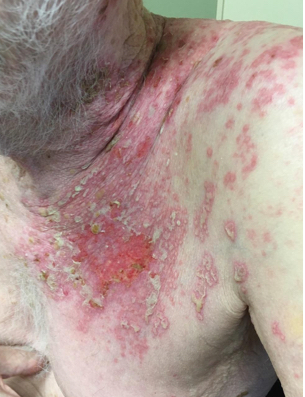 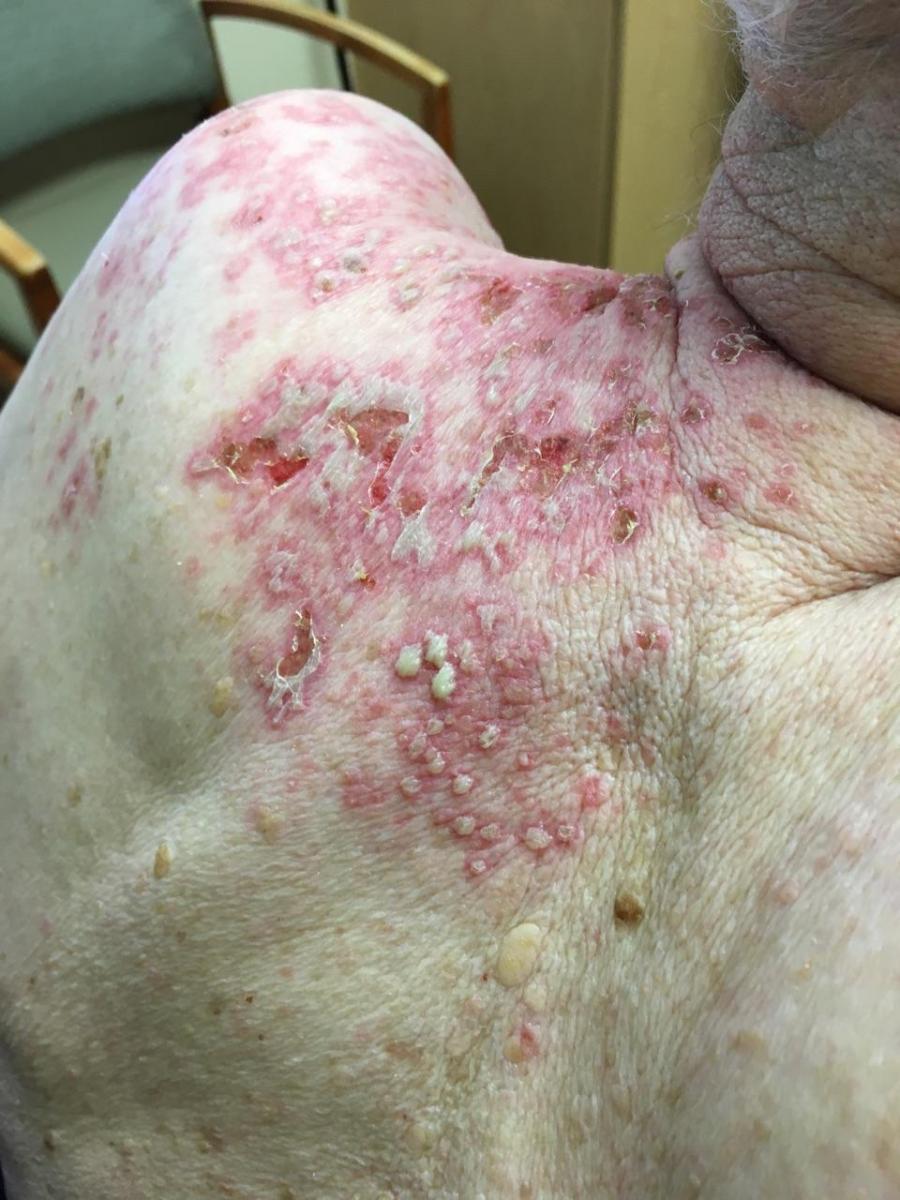 Treatment. The patient was started on a 10-day course of oral cephalexin, 500 mg 3 times daily, to address potential bacterial infection. Additionally, oral valacyclovir, 1000 mg 3 times daily for 7 days, was prescribed to slow the progression of HZ disease and attempt to prevent the development of postherpetic neuralgia (PHN). Because of the lack of pain, which classically is associated with HZ, analgesia was not addressed. The patient was informed of the infectious nature of the rash due to the lack of crusted lesions. The patient and his caregiver were advised to stop rubbing, cleaning, and applying antibiotic ointment to the rash to prevent the creation of further sores and to allow healing.

NEXT: Outcome of the case

Outcome of the case. At a follow-up the following week, the patient’s rash appeared dry with crusted areas across the same distribution seen on initial presentation. The patient reported tenderness only along the jawline and upper cervical region below the mandible, which was suspected for PHN. The patient was adherent to the initially prescribed medications and was prescribed oral gabapentin, 300 mg up to 3 times daily, if needed for PHN.

Discussion. Herpes zoster (HZ), commonly known as shingles, is a common viral disease. Once a person is infected, the varicella-zoster virus travels retrograde and remains latent in cranial and dorsal root ganglia.1 HZ can arise with reactivation of the virus later in life when the person becomes immunosuppressed. The characteristic rash is an acute, erythematous lesion with groups of vesicles that can be distributed across up to 3 adjacent dermatomes. In more than 90% of HZ cases, excruciating pain arrives prior to the appearance of the rash.2 The pain may become chronic after the rash has healed (PHN).

Acute HZ and PHN can have a significant negative impact on quality of life,3,4 including chronic fatigue, anorexia, anxiety, depression, suicidal ideation, and interference with activities of daily living. The pain associated with HZ is described as a burning, stabbing sensation that may accompany tactile allodynia.3 However, our patient’s case featured a lack of this initial characteristic pain.

The diagnosis of HZ can be made via observation of the classic rash, tissue biopsy, Tzanck smear, immunofluorescence, serologic tests, and polymerase chain reaction assay.1,2 Treatment for acute HZ includes acyclovir, valacyclovir, and famciclovir to reduce viral shedding and replication, the duration of acute HZ, and the incidence of PHN. Herpes zoster treatment is most beneficial within 48 to 72 hours of recognition of the rash. However, if given after the preferred time window, treatment may prevent further progression of the rash, lessen pain, and hasten healing.5 It is also important to keep the rash dry and to avoid the use of topical antibiotics.

PHN is a severe complication for 10% to 18% of persons with HZ, beginning 30 days to 6 months after an acute outbreak.6 PHN can occur for days to years and range from mild to severe, intermittent to constant. Treatment varies significantly and can include lidocaine 5% patch, capsaicin 8% patch, tricyclic antidepressants, anticonvulsants (gabapentin and pregabalin), and opioids.7

In the past, prevention of HZ was best achieved by administering the live, attenuated zoster vaccine (Zostavax) to patients aged 60 years or older. If reactivation were to occur, the vaccine would lessen the severity of the rash.6,8 The live, attenuated vaccine has been shown to reduce the risk of developing HZ by 51.3% and to be 66.5% efficacious for preventing PHN.6

However, in October 2017, the US Food and Drug Administration approved and licensed Shingrix, a 2-dose, live recombinant subunit vaccine for the prevention of HZ and PHN in immunocompetent adults aged 50 years or older. According to the Advisory Committee on Immunization Practices, Shingrix is recommended for persons who previously have received Zostavax and is now the preferred vaccine,9 given that it has been found to decrease the incidence of HZ by 96%.7

This patient’s case demonstrates the importance of observation in the diagnosis of rashes in primary care. Additionally, understanding the latest HZ vaccine guidelines and the need to promptly treat an HZ outbreak could decrease the chance for recurrence and prevent PHN despite an atypical patient presentation.