Pearls of Wisdom: Do Statins Cause Diabetes?

We previously met Louis, a healthy 68-year-old male who currently takes no medications but has been reluctant to start statin use due to concerns that it may cause dementia. After reviewing the literature with your patient, you were able to clarify that there is no known association between statins and dementia in clinical trials, although there was a suggestion that they were associated with a lesser risk for all-cause dementia, Alzheimer’s, and mild cognitive impairment. Ultimately satisfied, he did start his course of statins.

Today, you receive a call from Louis who is concerned about the recent news that indicates statins cause diabetes.

How do you respond?

Louis Kuritzky, MD, has been involved in medical education since the 1970s. Drawing upon years of clinical experience, he has crafted each year for almost 3 decades a collection of items that are often underappreciated by clinicians, yet important for patients. His “Pearls of Wisdom” as we like to call them, have been shared with primary care physicians annually in an educational presentation entitled 5TIWIKLY (“5 Things I Wish I Knew Last Year”…. or the grammatically correct, “5 Things I Wish I’d Known Last Year”).

Answer: Yes, they are associated with a relative risk increase of about 10%

In contrast to Louis’ question about risks for cognitive impairment related to statins, we cannot be quite as sanguine about the risk of new onset diabetes. To address this question, let’s look at data published in 2010:1

Over a mean follow-up of 4 years, there were 4278 cases of now onset diabetes. The odds ratio for development of new onset diabetes was 1.09, indicating a 9% relative risk increase for new diabetes in persons on statins compared to persons not on statins. But before becoming discouraged about this, we need to look at the statistics a little more closely. 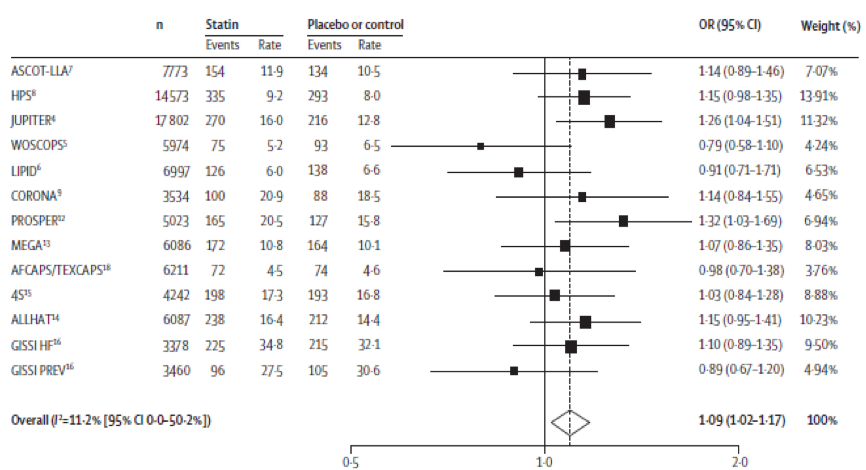 First, were the numbers consistent? A forest plot of the individual trials shows fairly good consistency.

Using the same analysis, it appears that risk for diabetes is consistent amongst the statins, with no particular outliers. But what does the “9% relative risk increase” really mean?

Does It Make A Difference Which Statin?1 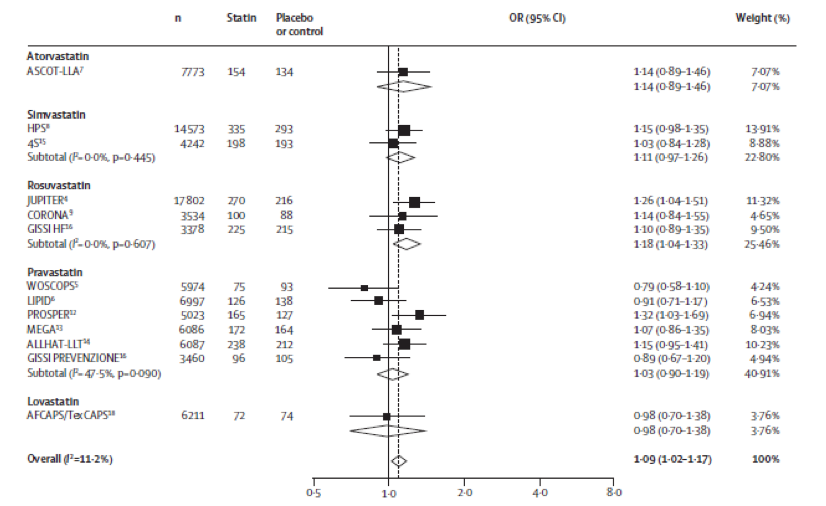 This data would indicate that approximately 255 people would have to be treated with a statin for 4 years to induce 1 new case of diabetes.

It is true that statins do minimally increase risk for diabetes, but because the benefits to risk of cardiovascular disease provided by statins far outweighs the increased risk for diabetes. In most cases, patients who merit statin treatment should be generally be encouraged to continue the statin.

In appropriate patients, statins are well established in their ability to reduce risk of cardiovascular disease. A very small proportion of patients who take statins will develop diabetes as a result, but this risk is measurably smaller than the anticipated cardiovascular risk reduction.