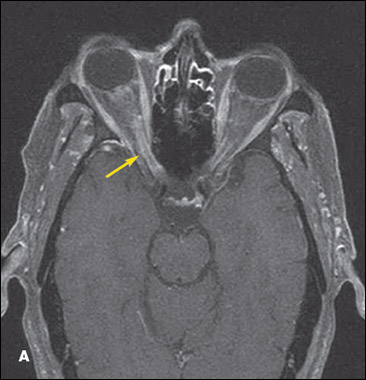 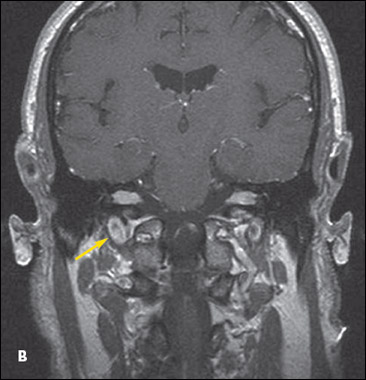 A 65-year-old man, who was lost to follow-up after abdominal-perineal resection for rectal adenocarcinoma 9 months earlier, presents with progressively worsening neurological symptoms, including bilateral hearing loss, dizziness, gait disturbance, ataxia, and blindness in the right eye.

Findings on a CT scan of the head are unremarkable. MRI scans of the brain with gadolinium reveal enhancement along the meningeal surfaces of the right optic nerve and to a lesser degree of the left optic nerve (A), and expanded cranial nerves VII and VIII bilaterally (B). No evidence of hydrocephalus, intraparenchymal mass, or stroke is present.

Based on the clinical picture and MRI findings, what would you include in the differential?

WORKING THROUGH THE DIFFERENTIAL 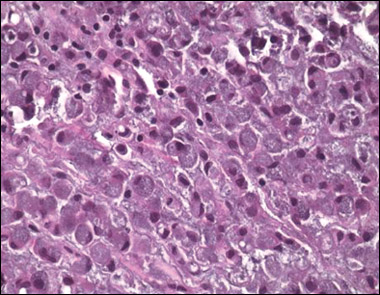 Figure – Histological evaluation of the biopsy specimen revealed cytokeratin and mucicarmine, consistent with a metastatic tumor of GI origin.

After a week without clinical improvement, empirical therapy for tuberculosis and syphilis was initiated. A second lumbar puncture done a week later was positive for atypical cells. A subsequent biopsy of the cerebellopontine angle was positive for signet ring cell adenocarcinoma (Figure).

Consequently, cyclophosphamide, methylprednisolone, and the antibiotics were discontinued. The patient received radiotherapy followed by intrathecal chemotherapy.

The diagnosis is based on CSF examination and radiological investigation, mainly with MRI.2 Lumbar puncture for CSF cytology remains the standard diagnostic procedure; demonstration of malignant cells in the CSF is the gold standard.1 A positive CSF cytology is found in 30% to 40% of cases on the initial lumbar puncture and in 80% to 90% of cases after 3 attempts.1 Increased CSF opening pressure is found in 50% of patients and depends on the extent of the leptomeningeal involvement.1 Elevated CSF protein levels and low glucose levels are observed in about 75% and 40% of the cases, respectively.1

Gadolinium-enhanced MRI is more sensitive than CT in detecting leptomeningeal metastases: the sensitivity is nearly 70% for MRI compared with about 30% for CT.1 The most common MRI findings consist of typical nodules in subarachnoid and parenchymal regions, parenchymal volume loss, and sulcal/dural enhancement. The differential diagnosis should include infectious causes, inflammatory diseases, trauma, and subdural hematomas.1