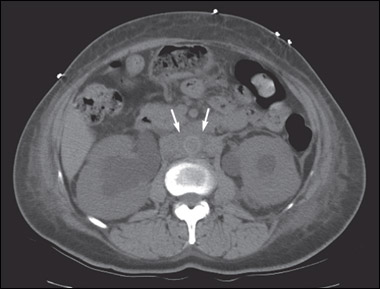 For about 2 weeks, a 61-year-old woman with diet-controlled diabetes and hypertension had fatigue and generalized weakness. For the past 3 months, she had had poorly localized back pain and bilateral flank pain. She denied dysuria, fever, decreased urinary output, or weight loss.

Idiopathic retroperitoneal fibrosis was diagnosed after urological consultation and further testing that was negative for secondary causes.

Although rare, retroperitoneal fibrosis should remain in the differential diagnosis of renal failure from obstructive uropathy. Typical age at diagnosis ranges from 40 to 60 years.1 The disease affects men more than women by a ratio of 2-3:1. About two-thirds of cases are idiopathic. The remaining one-third of cases are secondary to a variety of causes, including long-term use of certain medications (eg, β-blockers and hydralazine), infection (tuberculosis, histoplasmosis), retroperitoneal malignancy (lymphoma, carcinoid tumor), abdominal aortic aneurysm, certain abdominal surgeries, and abdominal radiation.1-3

The pathogenesis of idiopathic retroperitoneal fibrosis is thought to stem from either an exaggerated local inflammatory response to aortic atherosclerosis or an autoimmune process.2,3 The latter is supported by the frequent elevation of acute phase reactants and the relatively common presence of autoantibodies (such as antinuclear antibody).

No laboratory abnormalities are diagnostic of the disease. CT is the imaging modality of choice and classically shows a confluent mass encasing the aorta. Biopsy is not universally recommended unless malignancy or infection is suspected, the location of fibrosis is atypical, or response to initial therapy is inadequate.

This patient underwent cystoscopy with bilateral retrograde pyelography and bilateral ureteral stenting. Her urinary output increased after the procedure, and her creatinine level normalized. She declined treatment with corticosteroids because of concerns about adverse effects and was discharged with plans to follow up with a nephrologist.