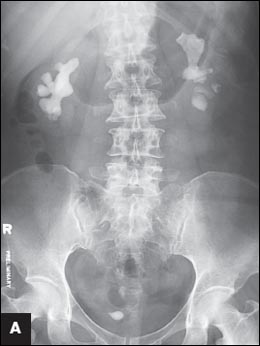 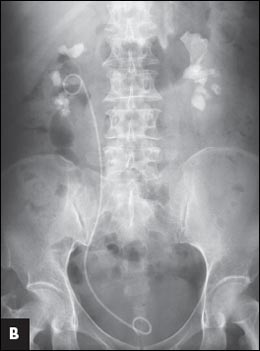 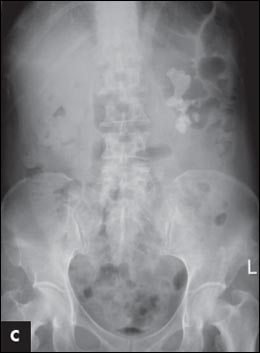 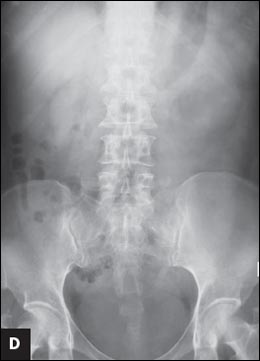 Figure 1 – A pretreatment plain radiograph reveals bilateral renal stones and a right lower ureteral stone inside an ureterocele (A). Treatment results are shown after the first percutaneous nephrolithotomy (PCNL) and removal of the ureteral stone (B) and after the second PCNL (C). Complete stone clearance is achieved after the third PCNL (D).

A 48-year-old woman sought medical attention after an episode of gross hematuria associated with mild right-sided loin discomfort. She did not have urinary frequency, urgency, or dysuria. Her history included 3 urinary tract infections; a Proteus species was cultured on each occasion. The family history was unremarkable. Other than mild loin tenderness, physical findings were normal.

Urinalysis showed 5 to 10 white blood cells and 3 to 5 red blood cells per high-power field. Urine culture was negative. Plain radiography with a kidney-ureter-bladder (KUB) view revealed multiple opacities in the region of both kidneys and specifically in a location that corresponded to each renal pelvis (Figure 1A). A subsequent intravenous urogram (IVU) confirmed the presence of bilateral renal staghorn calculi and a right ureteral stone within a ureterocele. A radioisotopic study showed the differential function of the right and left kidneys to be 44% and 56%, respectively, with scarring in the upper pole of the right kidney. Serum calcium, phosphate, urate, blood urea( nitrogen, creatinine, and electrolyte levels were normal.

The patient underwent transurethral incision of the right ureterocele and ureteroscopic removal of the ureteral stone. Simultaneous right percutaneous nephrolithotomy (PCNL) was performed, and a ureteral stent was inserted at the end of the procedure (Figure 1B). Secondstage right PCNL for the residual stones was performed 2 weeks later, and all the stones were cleared (Figure 1C). Left PCNL was also performed with clearance of all the residual stones (Figure 1D). Stone analysis revealed that the calculi were composed of 76% magnesium ammonium phosphate (struvite) and 24% calcium carbonate( apatite.

Urolithiasis affects about 10% to 12% of the population worldwide, and the incidence is increasing.1,2 Without preventative intervention, up to 50% of patients have a recurrence within 5 years after successful treatment. Males and those with a family history of renal stones are more likely to be affected. Staghorn stones are slightly more common in females.3

Staghorn calculi are branched stones that occupy a major part of the renal collecting system.4 These stones usually fill the renal pelvis and branch into several or all of the calices. Most staghorn stones are composed of mixtures of magnesium ammonium phosphate and calcium carbonate apatite, but cystine and uric acid stones can also present in this fashion.3

Staghorn stones composed of struvite are usually associated with urinary tract infection caused by a urea-splitting organism, the most common of which is Proteus mirabilis. Other urea-splitting bacteria include some Klebsiella and Pseudomonas species, Staphylococcus saprophyticus, and Ureaplasma urealyticum. The resultant alkaline urinary environment and the high urinary concentrations of ammonia, trivalent phosphate, and magnesium promote crystallization of magnesium ammonium phosphate, which leads to the formation of large, branched stones.4 Magnesium ammonium phosphate stones can form on a idus of a calcium oxalate renal stone.

Renal stones are often asymptomatic. In contrast to ureteral stones, renal stones seldom present as an emergency. Typical symptoms of acute renal colic are intermittent colicky flank pain that might radiate to the lower abdomen or groin.5 Nausea and vomiting may be present. 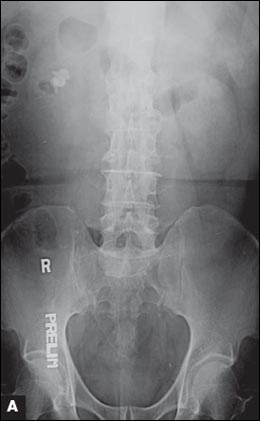 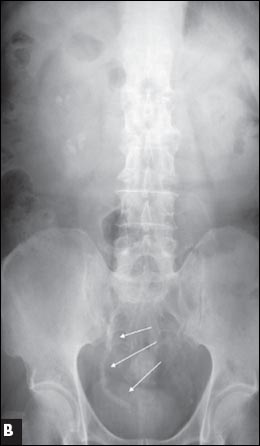 Figure 2 – A large right upper caliceal renal stone is shown on a pretreatment radiograph (A). After one session of extracorporeal shockwave lithotripsy, stone fragments are scattered inside the mid and lower calices and steinstrasse formation is evident in the right lower ureter (B, arrows).

Urinalysis typically shows hematuria, which is present in 85% to 90% of patients with a renal stone and is usually microscopic. White blood cells and bacteria suggest concomitant infection. Struvite crystals are usually coffin lid–shaped. Cystine crystals are hexagonal. Uric acid crystals are rhomboid, biconvex, or barrel-shaped. Calcium oxalate crystals can be bipyramidal, ovoid, biconcave, or dumbbell-shaped; are birefringent; and appear as bright specks with polarized microscopy.

Urine pH can provide clues about the possible composition of the stone. If the urine pH is higher than 7.5, the stone is probably infective in origin. If the urine pH is less than 5.5, a uric acid stone is more likely. Urine culture is important to rule out a coexisting urinary tract infection.6

Blood tests for urea, creatinine, electrolytes, calcium, and urate should be performed. If the patient has hypercalcemia, consider hyperparathyroidism. A 24-hour urine collection for calcium, phosphorus, uric acid, oxalate, cystine, citrate, sodium, magnesium, and creatinine should be ordered.

Plain radiography of the abdomen with a KUB view reveals up to 70% of renal stones. Ultrasonography or unenhanced helical CT can detect more than 90% of renal stones.7,8 IVU was formerly the study of choice to confirm the presence of the stone, to provide an anatomical outline of the urinary tract, and to identify the presence and the degree of obstruction. CT is commonly available and is now considered the study of choice. A supplementary IVU is indicated for renal pelvic stones, for caliceal stones larger than 1 cm, and after failure of extracorporeal shockwave lithotripsy (ESWL).

For patients with large renal stones, such as staghorn calculi, or with a poorly functioning kidney, radioisotopic renography should be performed to assess the differential renal function.

Untreated staghorn calculi are associated with eventual renal destruction and significant morbidity and mortality.9 Active treatment should be offered to patients with these stones.

Extracorporeal shockwave lithotripsy. Since its introduction in 1980, ESWL has become a common first-line treatment option for urinary stones, especially those smaller than 1 cm. The success rate is lower for large renal stones. There is a higher risk of obstruction because of the production of a large amount of small stone fragments or steinstrasse (stone street) (Figure 2). For stones larger than 2 cm, PCNL is a better option.

According to the American Urological Association (AUA) Nephrolithiasis Clinical Guidelines Panel on Staghorn Calculi, ESWL monotherapy is not recommended as a first-line treatment for staghorn stones, especially cystine stones. Rather, this therapy should be used only in combination with PCNL.4 A single staghorn stone of less than 4 cm that is heterogeneous and has a density similar to or less than that of the bone, and that is present in a normal collecting system, has the best response to ESWL.10,11 Contraindications to ESWL include pregnancy, uncontrolled bleeding tendency, severe skeletal deformity, morbid obesity, untreated urinary tract infection, aortic aneurysm, and renal artery aneurysm.12 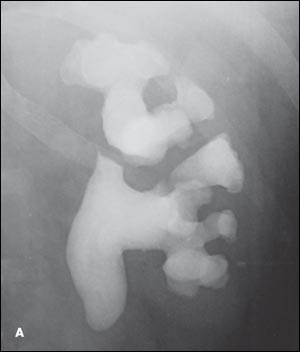 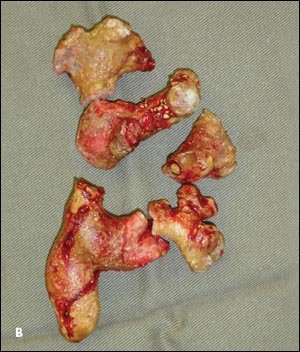 Figure 3 – A complicated staghorn stone is shown on a pretreatment radiograph (A) and after removal by open surgery (B).

Percutaneous nephrolithotomy. This procedure involves the creation of an access tract into the renal collecting system through which nephroscopy can be performed.5 PCNL is highly effective13: treatment outcomes are relatively independent of stone size and are uniformly high for stones in all locations.

The AUA recommends PCNL as the treatment of choice for most patients with a staghorn stone.4 For patients with extremely large or complex staghorn stones, combination therapy with ESWL might be necessary. PCNL has a stone-free rate close to that of open surgery.12 PCNL also has the advantages of lower morbidity, shorter operative time, shorter hospital stay, and earlier return to work.12

Ureteroscopy. The use of flexible ureteroscopy and the wide availability of the holmium:YAG laser, which can fragment nearly all stone types to dust-like particles, allow the performance of retrograde intrarenal surgery for renal stones. Complications are relatively uncommon with modern ureteroscopy.14 The stone-free rate for a small to moderate- size stone is comparable to that of PCNL. The procedure is particularly useful in patients with renal anomalies such as horseshoe kidney and caliceal diverticulum, in whom the stone-free rate with ESWL is typically low because of poor clearance of stone fragments. Ureteroscopy is also an attractive option for patients in whom ESWL and PCNL are less effective or contraindicated, such as those who are pregnant or morbidly obese or who have a coagulopathy.5

Open surgery. Open surgery for renal calculi has now been supplanted by less invasive procedures.5 Studies have confirmed the advantages of endoscopic surgery (PCNL) over open surgery for staghorn stones.15,16 Open surgery is mainly reserved for patients with large, extensively branched, complex staghorn stones (Figure 3), those with altered renal anatomy, and those with coexisting renal abnormalities that require a simultaneous reconstructive open procedure. However, for a kidney with poor renal function (differential kidney function of less than 15%), simple nephrectomy might be more definitive and beneficial for the patient than multiple complicated endoscopic stone removal procedures.

After successful stone clearance, prophylactic measures are necessary to prevent stone recurrence. The composition of the stone should guide prophylactic therapy. For patients with struvite stones, predisposing factors for urinary tract infection, such as voiding dysfunction, vesicoureteral reflux, obstruction, and neurogenic bladder, should be identified and treated. Periodic urine cultures are needed to detect urinary tract infection.

For patients with a uric acid stone, a low-purine diet is advisable; medical treatment is indicated if hyperuricemia cannot be controlled by dietary modification. Increased fluid intake and alkalinization therapy should also be recommended to decrease the risk of uric acid crystal formation in the urine.

Patients with calcium-related stones should avoid foods with a high content of oxalate, such as wheat bran, spinach, cocoa, and nuts.17 The present consensus is that excessive dietary restriction of calcium intake is not recommended.17,18 Consumption of citrus fruit can help increase levels of urinary citrate, which forms a complex with calcium and minimizes the risk of calcium calculi formation.19 Excessive salt intake should be avoided because a high sodium load in the renal tubules will result in increased excretion of calcium into the tubular fluid.20