What Is Under My Breast?

Robert A. Norman, DO, MPH • Cory Porteus Dr. Norman is in private practice in Tampa, FL. He is also associate professor, University of Central Florida School of Medicine, Orlando, and at Nova Southeastern School of Medicine, Davie, FL. Mr. Porteus is a third-year student of osteopathic medicine at Lake Erie College of Osteopathic Medicine, Bradenton, FL.

A 68-year-old woman presented with a 6-week history of a persistent rash that had appeared simultaneously beneath both breasts. She described the rash as feeling moderately itchy and stated that it had not spread beyond the submammary folds. She had a history of type 2 diabetes and hypertension, for which she was taking metformin and lisinopril, respectively. She was treating her rash with an over-the-counter topical cream and powder, but received no relief in symptoms. Recent blood tests were reviewed and appeared to be within the normal limits.

Upon examination, the rashes were erythematous and scaly with satellite lesions (Figures).They were present beneath each breast and extended no further than the skin covered by the overhanging appendages. We took a scraping and biopsy, and we asked her to return for a follow-up appointment in 2 weeks. 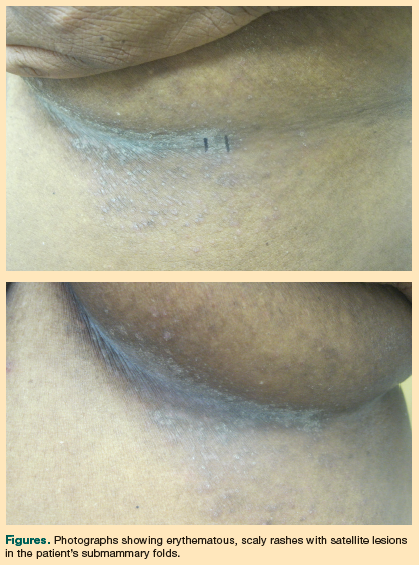 Based on the photographs and the case description, what is your diagnosis?

Answer and Discussion on next page

Candidiasis is a fungal infection caused by yeasts belonging to the genus Candida. Candida albicans (C albicans) is the most common of the more than 20 species of Candida yeasts that may cause infection in humans.1,2 We did not perform a culture to test for C albicans specifically in our case patient, but we see this condition frequently in our practice, so we highly suspected it to be the causative agent. Most Candida species are commensal and are part of the normal flora in the skin, mouth, vagina, and other mucosal areas of the body; however, it is also an opportunistic pathogen.3 Infection tends to occur in immunocompromised individuals, or when competing microbes are removed, such as after a course of antibiotics.3 Overgrowth of Candida may occur in both of these instances, causing symptoms to develop. Immunocompromised persons, newborns, and adults older than age 65 years are the most susceptible to candidal colonization.4

Candidiasis is one of the oldest and most common dermatological diagnoses, but the increasing prevalence of local and systemic diseases caused by Candida has resulted in numerous new clinical syndromes, the presentation of which depends largely on the individual host’s immune system.4 Candida can cause infection to the skin, gastrointestinal tract, genitourinary area, respiratory tract, and other areas. Some of the most common locations for presentation are the skin, oral cavities, esophagus, and the vaginal canal.1,2,5 In the fourth century BC, Hippocrates was the first to recognize oropharyngeal candidiasis, also called thrush.1 This manifestation of candidiasis is common in older adults, as the risk factors include wearing dentures, diabetes mellitus, and exposure to broad-spectrum antibiotics.6 Candida infection of the vaginal canal is also called vulvovaginal candidiasis, also known by the names vaginitis or the common “yeast infection,” which is estimated to occur in nearly 75% of all women during their lifetime.6

The clinical presentation varies on an individualized basis according to the type of infection and degree of immunosuppresion, but generally symptoms of candidiasis range from mild discomfort to inflammation to intense itching. In rare cases, usually in immunocompromised individuals, systemic infection with Candida has been reported.1,6 Cutaneous manifestations of Candida are often described as erythematous, beefy plaques with satellite papules.2,5 The warm, moist areas beneath the arms, the submammary folds, and the groin are common areas for presentation. A diagnosis of candidiasis can be strongly suspected upon visual examination, but a definitive diagnosis requires
biopsy confirmation.

Pathology Findings
In cases of cutaneous candidiasis, skin scrapings can be examined for budding yeast cells, hyphae (long, branching filamentous structures of fungus), or pseudohyphae, which are distinguished from hyphae by their method of growth, relative frailty, and lack of cytoplasmic connection between cells.4 A solution of potassium hydroxide can be used to dissolve the skin cells, leaving the typical pseudohyphae easily visualized.2,5 In our case patient, a skin scraping demonstrated pseudohyphae and the clear presence of fungi.

Approaches to Treatment
Treatment of Candida infections vary on an individual basis, depending on the location of infection, the patient’s underlying diseases, and other factors.4 The most common treatment for cutaneous infections is topical antifungals, most often ketoconazole.

We prescribed topical ketoconazole and a week of fluconazole 200 mg daily to our patient. At the 4-week follow-up, her rash had almost fully resolved and she remained clear of any relapses.

Ruling Out the Other Diagnoses

What follows is a discussion of some of the other possible diagnoses, which were ruled out for our case patient.

Inverse Psoriasis
The cause of psoriasis is not well understood, but it is commonly thought to be either an immune modulation dysfunction or an unregulated growth of epidermal skin cells.5-7 Psoriasis presents as inflamed red patches, usually with silvery scales reflecting an accumulation of excess skin.5 One of the five major types of psoriasis is inverse psoriasis, which is differentiated by the presence of these lesions almost exclusively located on flexural areas of the body, such as the axillae, breasts, or groin.7 The condition is thought to be exacerbated by the moist environment in these locations of overlapping skin. It is not contagious but can be inherited and aggravated by many factors. Diagnosis is often made by visual inspection, but a biopsy can be used to confirm it.

Allergic Contact Dermatitis
Allergic contact dermatitis presents with many of the same symptoms that presented in our case patient. This form of dermatitis, a delayed hypersensitivity reaction, is less commonly seen than irritant contact dermatitis.5,6 It results from two phases: (1) the initial induction phase, in which the allergen is picked up by dendrites and presents the allergen to T-cells; and (2) the elicitation phase, in which the previously stimulated T-cells respond by releasing large quantities of cytokines.5,6,8 It typically presents as an itchy rash or lesion that may also ooze, crust, or become scaly. If the allergen is present chronically, the skin may even darken and thicken. This dermatitis is distinguishable from the irritant form by being more widespread and by being reproducible upon exposure to the allergen.5 Diagnosis is commonly made by the patient’s history and a physical examination, but a patch allergy test is definitive.9

Intertrigo
Intertrigo (intertriginous dermatitis) is an inflammatory rash found on many of the same areas of the body as inverse psoriasis.6 The condition is induced by heat, moisture, friction, or lack of air circulation, commonly in compromised areas of skin where chaffing can occur, such as the groin, axillae, and between the fingers and toes.1,6,10 It can be worsened or colonized by infection, which is commonly candidal, but can also be fungal, bacterial, or viral.10 It appears as an erythematous, raised, raw-looking rash that can be itchy or seep a clear liquid. There are higher incidents of intertrigo in obese, diabetic, or bedridden adults and in adults who wear diapers.1 Intertrigo is diagnosed with a combination of potassium hydroxide stains, Wood’s lamp inspection, skin biopsy, and visual identification.6,11