Warty Oral Lesions in a Boy

A 10-year-old African American boy with lumps in the mouth for the past 2 years. The lesions had increased in size and number. They were generally asymptomatic but would become painful and bleed when the child accidentally bit them.

The patient was born vaginally to an HIV-negative mother who had no history of genital warts. Family history was negative for condylomas. He denied any sexual abuse; social services investigation was negative. Review of systems was negative for cough, stridor, or hoarse voice.

About 30 to 40 pink, soft papulonodules of 0.2 to 0.5 cm with verrucous surface noted on the tongue, buccal, and labial mucosae. Lesions were nontender except where traumatized by biting. The child had a 2-mm wart on the hand, no other lesions. Physical examination findings otherwise normal. 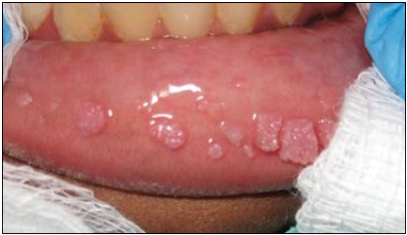 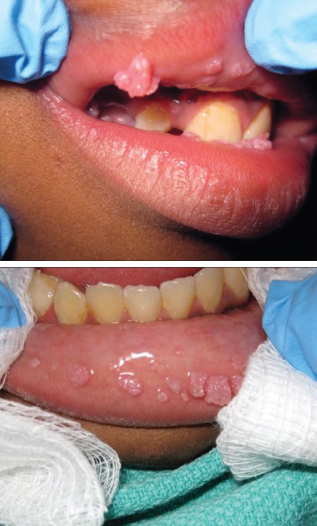 Heck disease is seen more commonly among Eskimos and Native Americans and is relatively rare in whites, Asians, and African Americans. The disease affects mostly children and young adults.

Diagnosis can be made clinically and confirmed by histologic findings and detection of HPV. In this patient, a biopsy confirmed the presence of HPV, which the
pathologist suspected to be a low virulence HPV type. The low virulence HPV types are present in most cases. HPV typing, which is costly, is usually performed when there is cytologic atypia or histologic features suggestive of a highly virulent type. Histologically, the condition is characterized by parakeratosis, epithelial hyperplasia, focal acanthosis, fusion, and thickening and elongation of rete ridges.

Cimetidine has been found to have immunomodulating properties, with increased cell-mediated immune response through activation of natural killer cells, inhibition of suppressor T-cells, and increased production of cytokines and interferon.6 Use of cimetidine in the therapy of warts in children is supported by uncontrolled studies and several case series, which report remission rates up to 81%.7 These results have not been confirmed in randomized trials.8

It is worth noting that laryngeal papillomatosis can cause changes in the larynx and respiratory tract. This benign neoplastic disease is most commonly caused by HPV-6 and HPV-11.9 It is unclear whether patients with Heck disease should be monitored by a pulmonologist, especially when HPV-11 is isolated from the oral mucosa.

This patient underwent local surgical excision with scalpel and laser on 2 separate occasions 3 weeks apart. Given the increasing size and number of the oral lesions, cimetidine was added to augment the treatment regimen before surgery. Postoperatively, he was given topical and oral analgesia for pain with generally good results.

After a thorough literature search, we decided to refer him to one of our pulmonologists. A bronchoscopy was performed and revealed several subglottic papules. No high-risk HPV types were identified. However, this did not exclude HPV-13 and HPV-32, the types commonly responsible for focal epithelial hyperplasia. Findings from a chest CT scan to rule out pulmonary involvement were normal.

Several weeks later, the patient was referred to an otolaryngologist who noted complete resolution of all papules. At the child’s most recent follow-up, he had no visible recurrence and no pain. He returned to school for the new academic year and was doing well.