A 34-year-old woman presented to the emergency department (ED) with pain and swelling on the left side of her jaw, which had started approximately 1 week prior to presentation. The pain had resolved until 2 days before presentation. Since then, her pain had become constant and had progressively worsened. In addition to the jaw pain, she described a burning sensation under her tongue. Her only significant past medical history was cholelithiasis.

On physical examination, the patient appeared to be in moderate pain. Her vital signs were normal. She had swelling over the angle of the left mandible and a palpably enlarged left submandibular gland. There was no erythema overlying the submandibular gland.

Intraoral examination revealed swelling and mild injection around the submandibular duct on the left. Her submental space was soft, with no swelling or skin changes. She had mild trismus but was tolerating secretions (Figure 1). 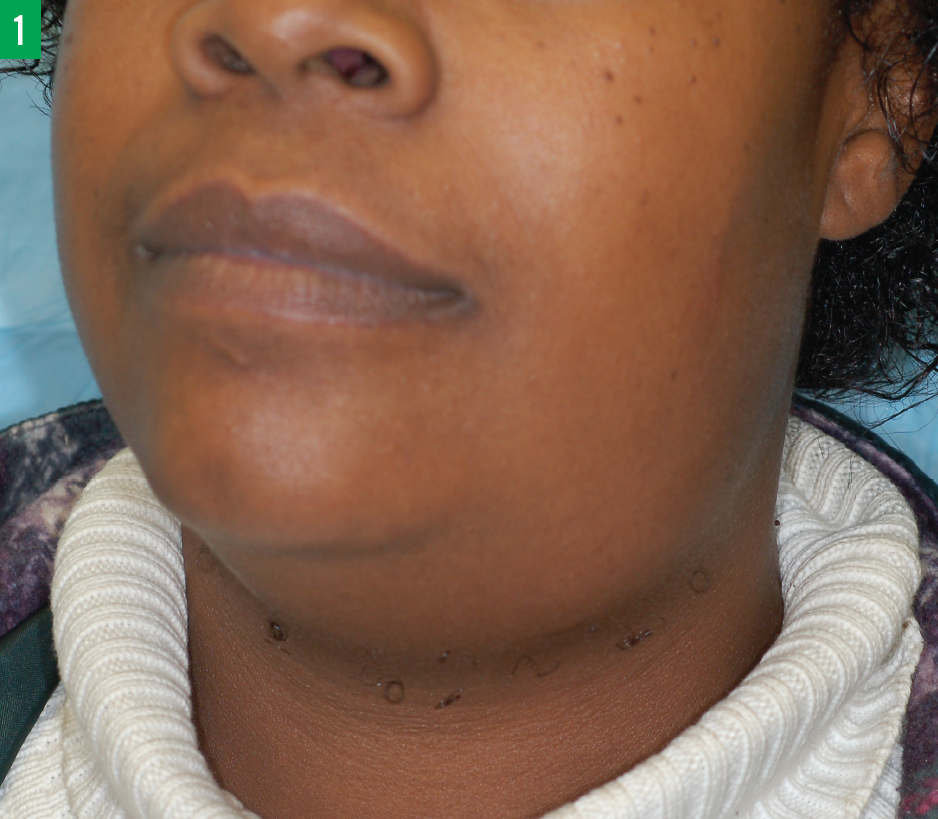 Jaw pain and swelling is a common complaint in the ED, with a broad differential diagnosis and vastly divergent treatment pathways. Proper diagnosis of sialolith has the potential to decrease a patient’s exposure to ionizing radiation and avoid complications.

Sialoliths can occur in any of the major or minor salivary glands. However, they are most common in the submandibular gland, accounting for 80% of sialoliths.1 This is often attributed to the submandibular saliva being more alkaline and having higher mucin and calcium concentrations. Additionally, the long course of the submandibular duct against gravity results in stagnation of the salivary flow and is also believed to contribute to stone formation.2 However, the exact mechanism of sialolith formation is unknown.

The diagnostic workup for sialolithiasis has traditionally included computed tomography (CT) scanning to identify the presence of sialolith, as well as to exclude other pathologies such as superficial or deep space abscess. Ultrasonography is an attractive alternative method to diagnose sialolithiasis in that it is noninvasive, does not involve ionizing radiation, and can be performed at the bedside.

Ultrasonography findings in cases of sialolithiasis include an intraluminal hyperechoic structure with posterior shadowing (Figure 2). However, stones less than 2 to 3 mm often do not cause posterior shadowing.3 Symptomatic stones are often a result of ductal obstruction. Thus ductal dilation proximal to the stone is often appreciated (Figure 3). The duct will appear anechoic with a lack of Doppler color flow. It is important to utilize color Doppler flow in the evaluation of ductal dilation, since nearby vasculature will appear similarly in grayscale. In normal or unobstructed salivary glands without ductal dilation, the duct is typically not appreciated. 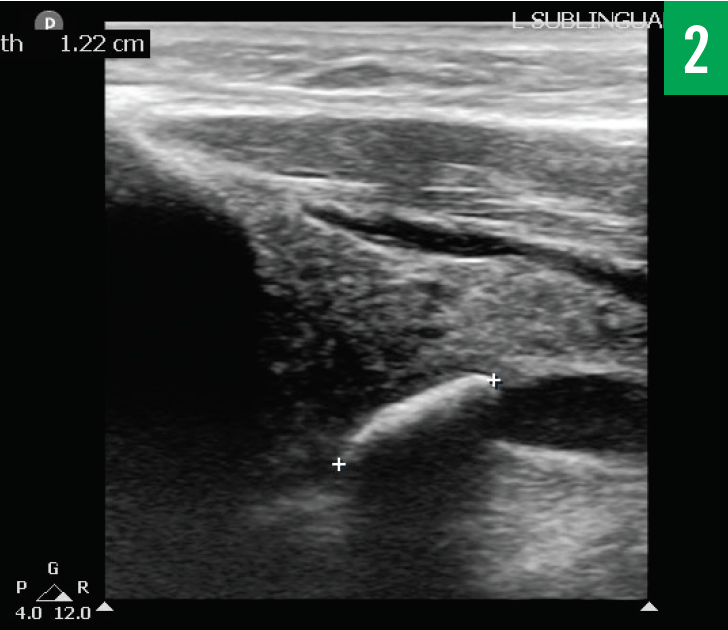 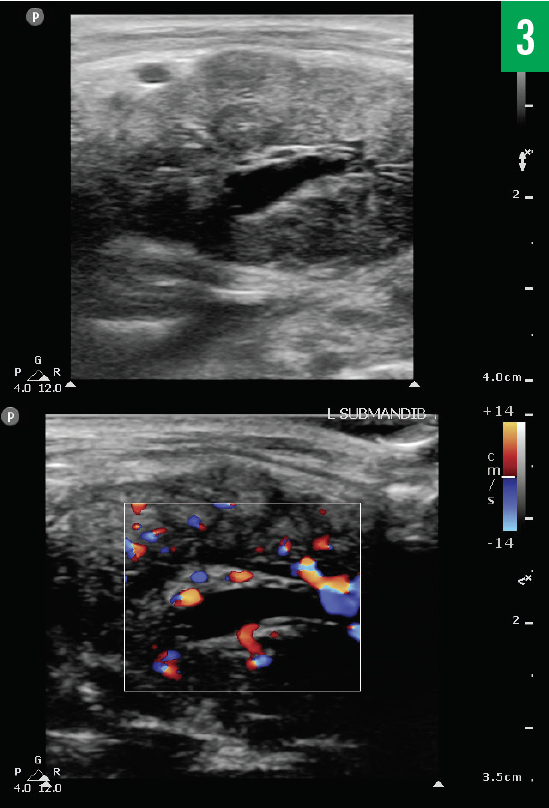 Ultrasonography performed at the bedside has been shown to be effective in the diagnosis of sialoliths.4,5 The sensitivity and specificity for ultrasonography in the diagnosis of sialoliths are 77% and 95%, respectively, with sensitivity increasing with the size of the stone.3 False positives can occur as a result of phleboliths, calcified lymph nodes, stenosis, and arterial vascular calcifications.3 As such, if a calcified structure is visualized, it is important to carefully ensure that it is intraluminal and that the lumen is contiguous with the submandibular duct. Nonvisualization of sialoliths or clinical findings that are worrisome for deep space abscess require subsequent CT scans or magnetic resonance imaging.

The traditional treatment for sialiolithiasis is pain control, warm compresses, and sialagogues to promote stone passage. Uncomplicated sialolithiasis does not require the routine use of antibiotics. However, signs of infection or systemic symptoms should prompt antibiotic treatment. The most frequent organisms identified are Staphylococcus aureus and Streptococcus viridans.6 Untreated sialolithiasis or failure of stone passage can be complicated by secondary infection leading to parenchymal inflammation, atrophy, fibrosis, or ductal stricture.3

The diagnosis of symptomatic sialolithiasis was made, and the patient was instructed to apply warm compresses and to take sialagogues and was given a course of pain control. The patient subsequently returned to the ED with worsening pain, swelling, and erythema. CT scanning was performed, showing the previously identified stone with concomitant sialadenitis, but no abscess was visualized (Figure 4). 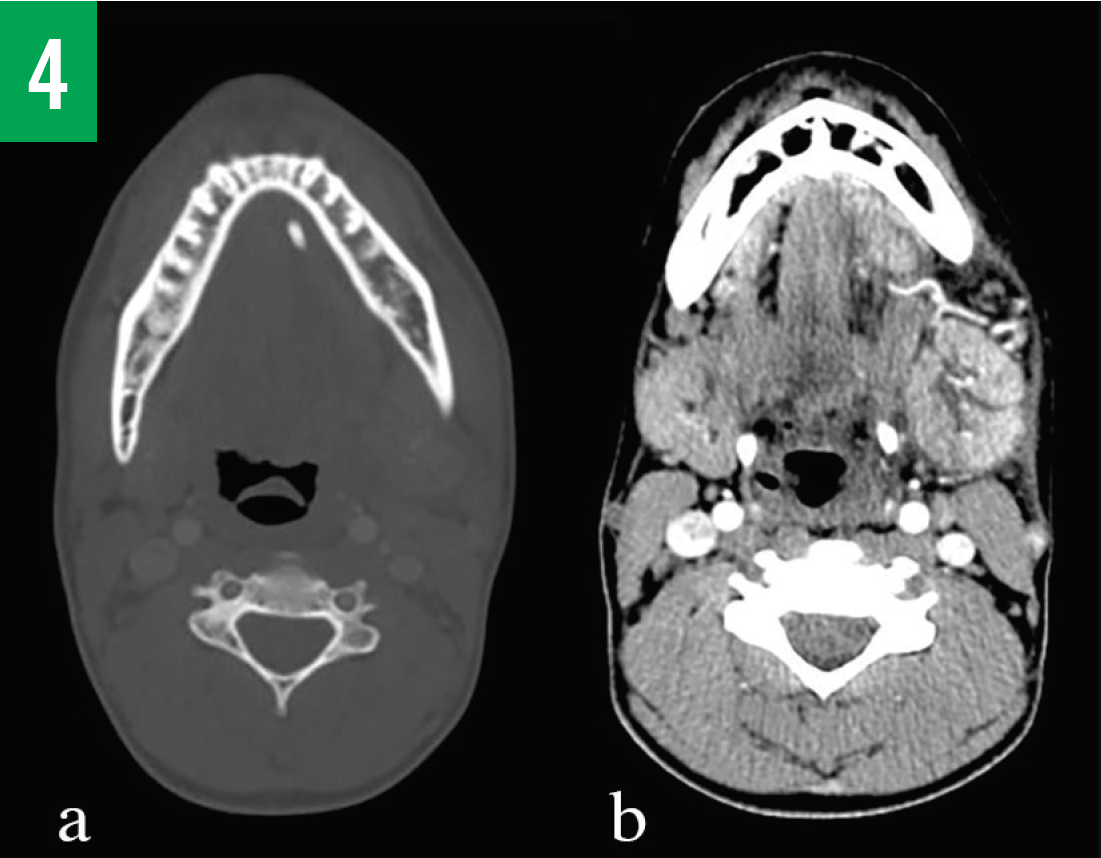 Figure 4. CT images showed a 12-mm stone in the submandibular duct (a) with enlargement of submandibular gland and fat stranding (b) suggestive of sialadenitis.

She was given intravenous dexamethasone and clindamycin and was admitted to the observation unit. An otorhinolaryngologist was consulted and performed a bedside excision of the stone (Figure 5). 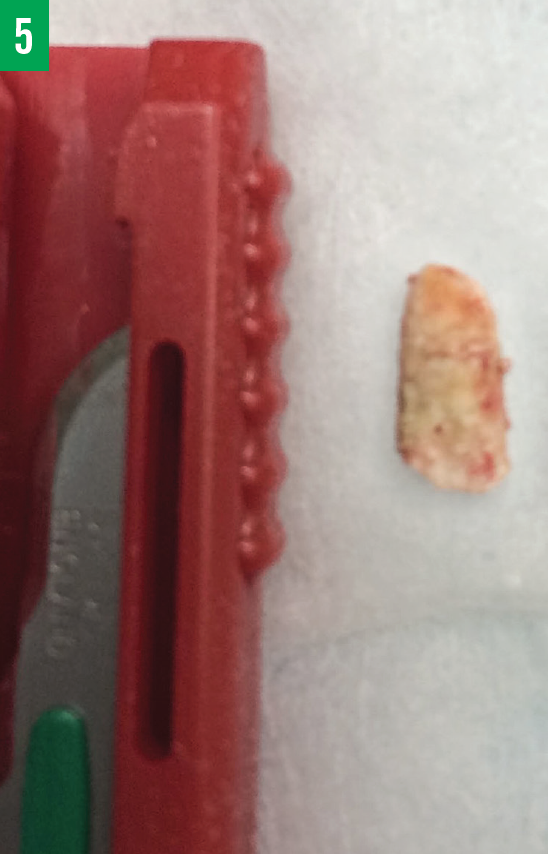 Figure 5. The sialolith after excision.

Matthew Tabbut, MD, is in the Department of Emergency Medicine, Division of Emergency Ultrasound, at MetroHealth Medical Center in Cleveland, Ohio.

The author thanks David Effron, MD, and Shawn Li, MD, for providing the clinical images.