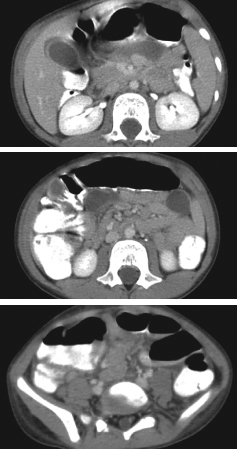 A 4-year-old boy of Nicaraguan descent was hospitalized because of worsening periumbilical abdominal pain. The pain began 6 days earlier and was accompanied by decreased appetite, nausea, emesis, and diarrhea. The patient had been living with his mother at a shelter for the past year and had no history of travel outside of the United States. At age 2 years, he had undergone ventricular septal defect repair.

The child’s temperature was 38.8ºC (102ºF); other vital signs were normal. He had mild generalized abdominal tenderness on deep palpation. Gastroenteritis or early appendicitis was suspected based on the presentation, and intravenous hydration was started. CT scans of the abdomen showed right lower quadrant adenopathy, retroperitoneal/mesenteric adenopathy, and pericholecystic fluid and ascites.

After a day in the hospital, the patient’s emesis had decreased, but he continued to have high fevers, with temperatures up to 39.6ºC (103.2ºF). He was also noted to have blood in his stool, and results of a fecal occult blood test were positive. Blood culture was obtained. The white blood cell count was 9800/µL (53% granulocytes, 32% lymphocytes, and 13% monocytes), with a hemoglobin level of 11.7 g/dL and C-reactive protein (CRP) level of 58 mg/L. Parenteral piperacillin/tazobactam and gentamicin were started. An echocardiogram, performed to rule out endocarditis, was normal. On the fourth hospital day, the blood culture grew Salmonella species, eventually identified as Salmonella Typhi (nonresistant strain). The initial antibiotics were discontinued, and ceftriaxone (50 mg/kg/d) was started.

Typhoid fever is caused by Salmonella Typhi, which is acquired by ingestion of contaminated food and water. The CDC confirmed that this boy’s illness was probably caused by consumption of contaminated Goya brand frozen fruit pulp. Each year, the disease affects at least 21.5 million persons in the developing world and about 400 persons in the United States, 75% of whom acquire the disease through international travel.1 Sustained high fever, abdominal pain, occasional bloody diarrhea, and weakness are common manifestations. With antibiotic treatment, recovery usually begins within 2 to 3 days, and death from the disease is rare. Complications (GI bleeding, intestinal perforation, and typhoid encephalopathy) occur in 10% to 15% of patients, particularly those who have been ill for more than 2 weeks.2

By hospital day 5, this patient’s fever and GI symptoms had resolved and the CRP level had decreased to 18 mg/L. He was discharged on hospital day 10, after 8 days of parenteral antibiotics. Outpatient treatment consisted of oral cefdinir (14 mg/kg/d) for 8 more days, with follow-up stool cultures for at least 3 more weeks. ■