A 13-month-old girl had a yellowish coloring of her skin for the past 4 months. There was no history of fever, vomiting, or tea-colored urine. Her developmental milestones were normal. Her diet consisted of whole milk and a variety of commercial baby foods. 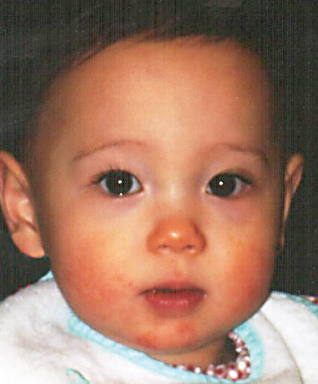 Healthy infant with yellow pigmentation of the cheeks, nasolabial folds, palms, and soles. Sclerae were normal. There was no hepatosplenomegaly.

Carotenemia is a clinical condition characterized by yellow pigmentation of the skin and an increased carotene level in the blood. It usually follows prolonged consumption of carotene-rich food.1-3 The child described had been consuming an excessive amount of carrots, sweet potatoes, and peaches in the form of commercial baby food. Carotenemia is common and benign, and as such it has received little attention in the pediatric literature.2 However, it can be associated with diabetes mellitus and hypothyroidism and can occasionally be confused with jaundice. Awareness of carotenemia is important, so that unnecessary diagnostic procedures can be avoided and parental anxiety can be reduced.

Excessive dietary intake of carotene.Consumption of carotene-rich foods is the most common cause of carotenemia.1-4 Children metabolize carotene more slowly than adults, which might account for the increased incidence of carotenemia in children.3

In general, vegetables and fruits that are deeper green or yellow contain the most carotene.7 The carotene content shows a seasonal variation with higher levels in the summer.

Carotenemia is likely to develop in infants who are fed a homogenized diet of fruit and vegetable baby foods, which are high in carotene, and in children who are habitually fed carotene-rich food. Normally, serum carotene levels remain low in infants until solid foods are introduced into the diet, typically around age 6 months, and are highest in infants aged 7 to 12 months.1-3 The concentration of serum carotene is much lower after age 1 year, perhaps consequent to the change in the diet from pureed to table food.1-3 Carrots and other carrot-rich ingredients are inexpensive and readily available and commonly added to most strained commercial baby foods; this might also contribute to the increased incidence of carotenemia in children. In addition, human milk is a rich source of carotene, especially if the maternal serum carotene level is high.8

Diet-induced carotenemia can be observed in food faddists and patients who attempt to lose weight by eating predominantly low-calorie foods (such as carrots).1-3 The particulate size of food has a significant inverse relationship to the serum carotenoid level and is an important factor in the pathogenesis of carotenemia.1-3 Carotenemia can follow the ingestion of carotene-rich commercial nutrient supplements.1-3,6 Ingestion of high-dose ß-carotene for the treatment of erythropoietic protoporphyria can also result in carotenemia.2

Hypothalamic amenorrhea.In some patients with hypothalamic amenorrhea, carotenemia developed as a result of a diet high in carotene-rich food. In other patients, the increased levels of serum carotene may have been caused by the mobilization of lipid stores or by the catabolic changes associated with weight loss.

Familial conditions.The mode of inheritance has not been determined in familial cases of carotenemia, but it is likely to be multifactorial.11

Malaria.Carotenemia has also been reported in patients with inadequately treated chronic malaria.2

The yellow skin discoloration of carotenemia is more pronounced under artificial light.12 Because carotene is excreted by sebaceous glands and is present in sweat, the pigmentation is particularly noticeable in areas where sweating is prominent.2

Carotenemia manifests first and most obviously on the palms, soles, and nasolabial folds and gradually extends over the entire body.1-3,5,13 The sclerae are always spared, which distinguishes carotenemia from jaundice.1-3 The palate is occasionally involved. The stratum corneum has a high lipid content, which has an affinity for carotene, whereas the mucosa has minimal affinity.1-3 This explains why the yellow pigment is present in the skin and absent in the sclerae and oral cavities of patients with carotenemia. Yellow pigmentation of the nails is extremely rare. Constitutional symptoms, such as itching, malaise, and weight loss, are characteristically absent.

A serum carotene level may be obtained; however, there is a wide variation by different authors as to what levels of serum carotene are considered normal.1-3 Serum xanthophylls, vitamin A, and lipid levels should be measured if the diagnosis is in doubt.

Carotenemia is most likely to be confused with jaundice. The pigmentation in jaundice is diffuse, appears first in the sclerae, and is more obvious in natural light.12 Constitutional symptoms, such as malaise, loss of appetite, nausea, vomiting, pruritus, and right upper quadrant abdominal pain, might be present. Physical examination may reveal hepatomegaly.

Lycopenemia can cause an orange or reddish discoloration of the skin, notably on the palms and soles. Similar to carotenemia, the sclerae are spared. The condition results from excessive ingestion of foods with a high lycopene content, such as tomatoes, beets, rose hips, bittersweet berries, watermelons, pink guavas, pink grapefruits, and papayas.1-3,5 Because lycopene is a more intensely colored pigment than ß-carotene, pigmentation of the skin and fat occurs at lower concentrations than with carotene.

Carotenemia, while a benign condition, may cause considerable parental anxiety and can lead to unnecessary medical intervention if it is confused with jaundice.5 Nutritional deficiencies are occasionally present if carotene-rich foods are chosen to the exclusion of other food groups.4,12

Treatment of diet-induced carotenemia should include parental reassurance, recommendations for a nutritious well-balanced diet, and reduction in the amount of carotene-rich foods if the yellow skin discoloration is a concern.12 Although serum carotene is not subject to large variations as a result of dietary changes in any one day, serum concentrations usually drop sharply within 1 week after carotene is reduced in the diet, and the yellow skin discoloration disappears gradually over several weeks to months.

This article originally appeared in Child Nutrition Research Advances by Laura V. Carter (2007)2 and is reprinted with permission from Nova Science Publishers, Inc.