Is There a Causal Relationship Between Child Sexual Abuse and Premature Adrenarche? 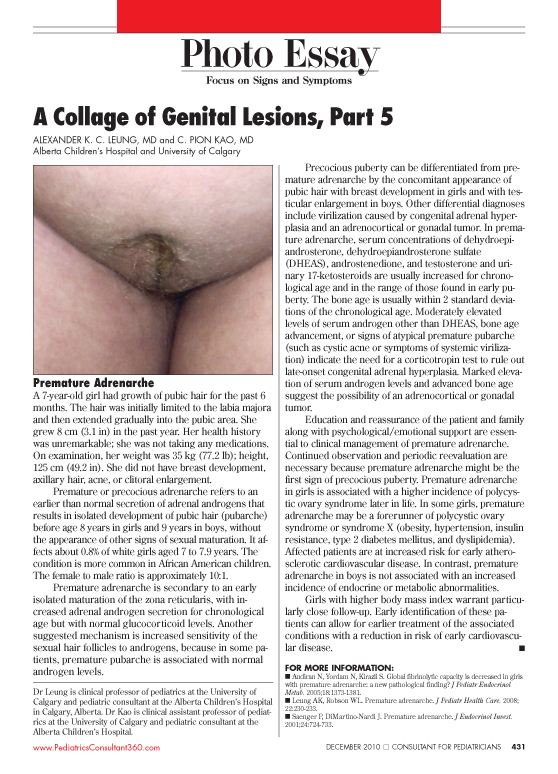 Is There a Causal Relationship Between Child Sexual Abuse and Premature Adrenarche?

The following comment was posted on our web site in response to a case on Premature Adrenarche in the Photo Essay titled “A Collage of Genital Lesions, Part 5” by Alexander K. C. Leung, MD and C. Pion Kao, MD (CONSULTANT FOR PEDIATRICIANS, December 2010, page 431):

Premature adrenarche was also noted in child abuse; arousing the sexual hormones due to sexual abuse should also be taken into account when doing physical examination and questioning the child, preferably without the parent or guardian.

Premature or precocious adrenarche refers to an earlier than normal secretion of adrenal androgens that results in an isolated development of pubic hair (pubarche) before the age of 8 years in girls and 9 years in boys, without the appearance of other signs of sexual maturation.1 The occurrence of premature adrenarche is usually sporadic, although familial occurrence has been described.1

Premature adrenarche is secondary to an early isolated maturation of the zona reticularis with an increase in adrenal androgen secretion for the chronological age but with normal glucocorticoid levels.2 Oversecretion of adrenocorticotropic hormone (ACTH) or corticotropin-releasing hormone (CRH) per se cannot account for premature adrenarche because ACTH always causes a greater increase in corticosteroids than in androgens. In patients with hyperadrenocorticotropism and hypercortisolemia, dehydroepiandrosterone (DHEA) and DHEA sulfate are not usually elevated. Nevertheless, ACTH and CRH might have a permissive role in the modulation of adrenal androgen secretion.3 An increase of a central androgen-stimulating proopiomelanocortin-derived hormone might be the primum movens of premature adrenarche.4

Several studies have suggested a causal relationship between child sexual abuse and early pubertal development. An early retrospective study of 105 girls who were victims of “confirmed” or suspected sexual abuse reported pubic or axillary hair development or breast development in 7 girls before 8 years of age.1 The study suggested that child sexual abuse may act as a stressor to stimulate adrenal androgen secretion or early activation of the hypothalamic-pituitary-ovarian axis. However, this study has several limitations, including its retrospective nature. It also considered a transverse vaginal opening of greater than 10 mm on physical examination as physical evidence of vaginal penetration.

In 1993, Trickett and Putnam2 surmised that there may be a direct mechanistic link between the impact of sexual abuse on biological processes and pubertal development. They suggested that sexual abuse may accelerate sexual maturation by acting as a psychological stress that alters the hormonal balance in the developing child.

In a study by Turner and colleagues,3 menarche began a full year earlier among sexually abused girls compared with the control group, 11.2 years versus 12.5 years, respectively. Findings also showed that 11 (79%) of 14 girls with early maturation were sexually abused. However, this was a correlational retrospective study with a small sample size that only included girls.

In a 23-year longitudinal study of the impact of intrafamilial sexual abuse on female development, Trickett and colleagues4 described adverse outcomes that sexual abuse has on several biopsychosocial domains. The authors suggested that child sexual abuse may trigger certain biological mechanisms, which in turn accelerate pubertal development. On average, abused females achieved Tanner stage 2 of breast and pubic hair at 7.5 and 6 months, respectively, earlier than the control group.

Most studies have been retrospective with a small sample size that only included girls. Other risk factors and stressors that may affect the onset of puberty were not fully assessed. It could be that the same risk factors that increase the likelihood of sexual abuse in families result in early sexual maturation, acting as an additional variable. In addition, most studies could not establish whether sexual abuse preceded and caused the onset of maturation. Further research is needed to affirm a causal relationship. Studies need to be prospective, inclusive of boys, and of an adequate sample size. They also need to evaluate other stressors and factors that may contribute to the onset of pubertal maturation.

Whether to consider sexual abuse is probably suggested on the basis of the clinical presentation and the psychosocial circumstances of individual cases. However, reporting a case of suspected abuse to Child Protective Services is unwarranted, in my humble opinion, when there are no other concerns and the sole presentation is early onset of pubertal development.