An 84-year-old Caucasian female presented to the medical admissions unit with a 2-week history of increasing left groin pain; she reported no relief with simple analgesia or change in position. The patient described progressive weakness of the left leg over this period and said that she had been unable to stand for several days. She denied back pain or urinary symptoms. Past medical history included atrial fibrillation (AF) and hypertension. Medications were warfarin 2 mg daily, digoxin 125 mcg daily, and bendroflumethiazide 2.5 mg daily.

On examination, the patient was apyrexial and hemodynamically stable. Neurological examination of the left lower limb revealed normal tone; power was decreased in the hip flexors to grade 0/5, with minimal wasting of the quadriceps evident. Sensory loss was apparent in the L2, L3, and L4 dermatomes, and the left knee jerk was absent. Extension of the left hip was painful. 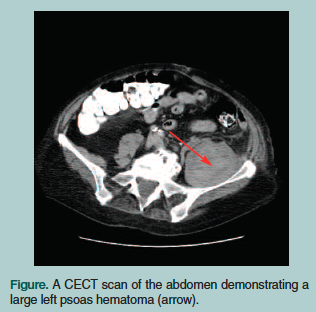 Investigations revealed an elevated international normalized ratio (INR) of 4.6 and low hemoglobin of 12.4 g/dL. The remainder of the patient’s complete blood count was normal, as were electrolytes, renal function, and liver function tests. Electrocardiograph demonstrated rate-controlled AF. A subsequent CECT scan of the abdomen revealed a large left psoas hematoma with no radiological evidence of ongoing bleeding (Figure).

A conservative approach to management was adopted with reversal of her anticoagulation. In view of her hemodynamic stability and chronicity of both of her symptoms and radiological findings, surgical decompression was not attempted. Motor recovery was minimal, with eventual quadriceps power of 1/5 and the development of marked wasting. Following prolonged inpatient rehabilitation, the patient was discharged home without any further anticoagulation. She remained wheelchair-bound and was able to transfer independently.

Warfarin is widely used in the management of AF, venous thromboemboli (such as pulmonary embolus and deep vein thrombosis), and in patients with prosthetic heart valves.1 It is used in almost 42% of patients with AF, with recent studies documenting a rise in prescriptions when compared to previous data.2 While evidence thus far has failed to prove a conclusive link between age and warfarin-associated bleeding,3 there is a reported increase in the number of bleeding complications associated with warfarin in patients age 75 and over.4

Patients with iliopsoas hematoma most commonly present with groin pain that may radiate to the lower back and/or thigh, progressing to muscle weakness and sensory change in the lower limb.8,9 However, the spectrum of presenting symptoms is wide ranging, from mild groin pain to collapse and hypovolemic shock.7 The femoral nerve is particularly susceptible to compressive neuropathy due to its anatomical course; after emerging from the lateral side of the psoas muscle, the nerve lies in a shallow groove between the iliac and the psoas muscle, where it is easily compressed by a hematoma.9 Early identification of femoral neuropathy is essential to reduce rates of patient morbidity and mortality.7,10 Theoretically, sensory symptoms occur most acutely, as sensory neurons are less myelinated than motor neurons. Leg weakness, therefore, tends to be representative of a chronic and/or more severe hematoma.6 Iliopsoas hematomas are most commonly unilateral; however, bilateral cases have been reported.8

Unenhanced CT was previously the diagnostic imaging of choice. More recently, the routine use of CECT has been recommended.10 CECT may demonstrate contrast extravasation, denoting active bleeding, suggesting that a patient may be less hemodynamically stable, and therefore requires a more aggressive approach to treatment. The use of magnetic resonance imaging has also been recommended, as it can rule out other causes of femoral neuropathy such as nerve root compression.9

Management is controversial, and approaches vary between conservative, interventional radiology, and open surgery. There is a lack of randomized control trials in this area due to the low incidence of presentation of such cases.9 Recent studies suggest that conservative management is acceptable in hemodynamically-stable patients. This involves cessation and reversal of anticoagulant therapy, fluid and blood-product resuscitation, and a “watch-and-wait” approach.9 Where active bleeding is demonstrated, an interventional approach is indicated (eg, transcatheter arterial embolization [TAE]).10 Current thinking suggests that open surgery should be reserved for patients who, despite fluid resuscitation, remain hemodynamically unstable or where interventional radiology is unsuccessful or unavailable.9