A 56-year-old man presented to an outside hospital for evaluation of sudden-onset abdominal pain and lightheadedness. He had a history of hypertension, which was well-controlled, and of mechanical mitral valve repair for nonrheumatic mitral valve prolapse, for which he was on warfarin therapy. He described the abdominal pain as dull and largely left-sided, primarily underneath his ribs. He denied having any nausea, vomiting, diarrhea, back pain, fever, or chills.

Upon arrival to the outside hospital, the patient was hypotensive, with a systolic blood pressure of 74 mm Hg; this improved to the low 90s mm Hg with aggressive fluid resuscitation. A computed tomography (CT) scan with contrast of the abdomen and pelvis completed at the outside hospital revealed evidence of pancreatitis. Findings of abdominal ultrasonography were unremarkable, and the patient’s lipase level, lactate level, white blood cell count, and comprehensive metabolic panel results were within normal limits. He was transferred to our tertiary care center for further management of pancreatitis.

Physical examination. Upon arrival to our institution, it was apparent that there was contradiction between the symptoms that the patient was reporting, our physical examination findings, and the clinical data that thus far had been collected. Abdominal examination findings were largely unimpressive for someone with pancreatitis; the patient denied having any lower back pain, nausea, or vomiting; and results of a repeated lipase test were within normal limits.

The CT images done at the outside hospital were reviewed by a radiologist at our facility; upon closer inspection, the fluid that originally had been mistaken for evidence of postinflammatory changes associated with pancreatitis was actually evidence of blood accumulation likely related to a splenic artery aneurysm rupture (Figure). 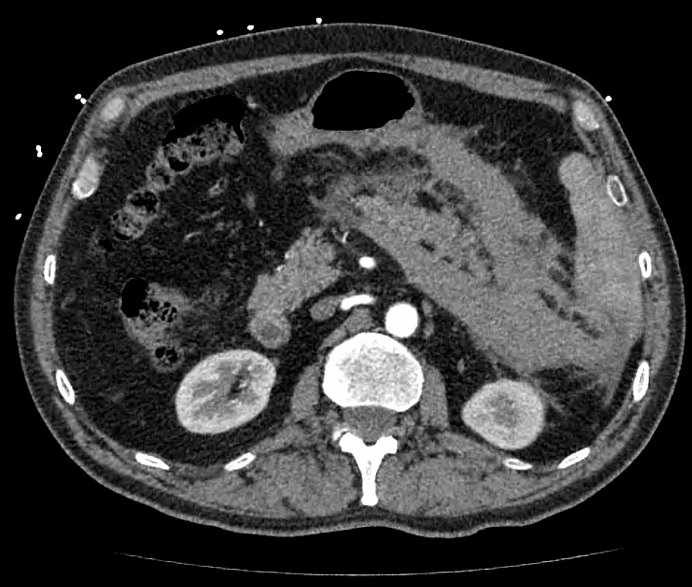 Figure. CT of the abdomen and pelvis with contrast showed evidence of pancreatic inflammation, but also a large accumulation of blood surrounding the body and tail of the pancreas, representing pseudoaneurysm rupture. No obvious splenomegaly was noted.

Diagnostic tests. Stat laboratory tests revealed a hemoglobin level of 12 g/dL (reference range, 11.6-15.2 g/dL) and an international normalized ratio (INR) of 2.05 (reference range while on anticoagulation, 2.0-3.0). The patient’s warfarin was withheld, and an interventional radiologist was consulted.

Treatment. The patient was taken for emergent abdominal aortic arteriography and subsequent coil embolization of the splenic artery following reversal of his INR with 10 mg of intravenous vitamin K. Intraoperatively, the interventional radiologist observed multiple areas of pseudoaneurysm along the splenic artery, suggesting a possible genetic etiology of the vascular malformation.

The patient tolerated the procedure well and was monitored in-house thereafter, with eventual resumption of his warfarin anticoagulation therapy.

Discussion. The splenic artery is one of the most frequent sites of visceral artery aneurysm and pseudoaneurysm.1 Hypertension, pregnancy, and portal hypertension are the most common factors contributing to the development of these vascular malformations.2 Less common causes include arterial fibrodysplasia, collagen vascular disease, and α1-antitrypsin deficiency.2 The development of an enlarging splenic artery aneurysm or pseudoaneurysm with potential for rupture can be precipitated by a variety of conditions, including pancreatitis or pancreatic pseudocysts, abdominal trauma, and postoperative complications.1,3

Pseudoaneurysms are often mistaken for pseudocysts or peripancreatic fluid collections on abdominal CT imaging; therefore, CT/magnetic resonance angiography or arteriography is often recommended as the diagnostic test of choice in cases of suspected rupture. The risk of rupture of splenic artery aneurysm or pseudoaneurysm is nearly 35% with mortality rates of almost 90% when untreated.1,4,5 Therefore, it is imperative that clinicians maintain a high index of suspicion to allow for prompt recognition and swift intervention. Treatment modalities include surgical intervention (eg, aneurysm resection, splenic artery ligation, splenectomy with or without partial pancreatectomy) or transcatheter embolization.6

In our patient’s case, it appears that the peripancreatic fluid collections mistaken for pancreatic inflammation were more likely evidence of blood accumulation related to splenic pseudoaneurysm rupture. This suspicion was confirmed with arteriography, and embolization was successfully pursued. It is unclear whether a bout of pancreatitis or another unidentified event led to pseudoaneurysm rupture. Furthermore, it remains unclear what predisposed this patient to the development of this vascular malformation, aside from his well-controlled hypertension. Given the intraoperative findings of multiple pseudoaneurysms, it is reasonable to consider the possibility of an autoimmune or collagen vascular disease. However, the patient declined further evaluation following resolution of his acute aneurysmal rupture.