Multiple Magnets in a Meckel’s

Dr Smith is a pediatric resident Dr Vaughan is professor of surgery Dr Nield is associate professor of pediatrics at West Virginia University School of Medicine in Morgantown. 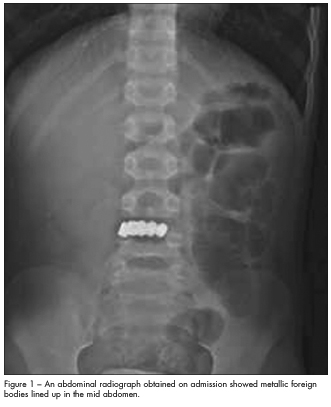 A 5-year-old boy with mild developmental delay was taken to the local emergency department with a 2-day history of abdominal pain and nonbloody, nonbilious emesis. Acute appendicitis was suspected. A CT scan of the abdomen and pelvis revealed a 3-cm metallic foreign body in the intestines, with proximal bowel dilation and partial small bowel obstruction. The child was transferred to a tertiary care center for further evaluation.

On admission, the child’s vital signs were normal and his physical examination findings were unremarkable. The abdomen was soft, scaphoid, and nontender to deep palpation; bowel sounds were normal. An abdominal radiograph showed metallic objects in a linear array in the mid abdomen (Figure 1). The child repeatedly denied swallowing any such objects.

A wait-and-see approach was prescribed. A nasogastric tube was inserted, and oral feedings were eliminated. The abdominal pain and emesis resolved shortly thereafter. The child was observed with serial abdominal physical examinations and daily abdominal radiographs to monitor the position of the foreign bodies.

After about 48 hours, the position of the objects remained unchanged, and the child began having severe abdominal cramping and emesis. This prompted emergent exploratory laparotomy. The child was found to have a Meckel diverticulum, which had fistulized with the jejunum (Figure 2), and 5 metallic objects lined up inside the
fistula. The fistula perforated during the procedure. The foreign bodies were manipulated out of the perforation and identified as individual magnets (Figure 3).

The patient tolerated the procedure well. The remainder of his hospital stay was uneventful. His diet was slowly advanced, and he had regular bowel movements within 72 hours of the operation. He was discharged home 5 days postoperatively in satisfactory condition.

Meckel diverticulum is the most common congenital malformation of the GI tract and is thought to be present in as high as 4% of the population.1 While many anatomic variations exist, this anomaly is often taught as the “Rule of 2’s” in textbooks: found in 2% of the population, about 2 inches in length, often located within 2 feet of the ileocecal junction, and presents before age 2 years when symptomatic.1 This child’s Meckel diverticulum was located 85 cm (33.5 in) from the ligament of Treitz and 30 cm (11.8 in) from the ileocecal valve and would probably have never been identified were it not for the ingestion of the magnets. 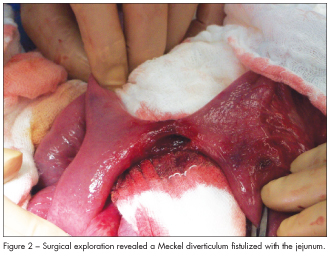 Meckel’s and magnets. While both the complications of Meckel diverticulum and the dangers of magnet ingestion by children have been reported, we found only one other case report in which the 2 entities occurred simultaneously in the same child. The case involved a 16-year-old boy with a Meckel diverticulum who had swallowed several metallic balls 4 to 6 weeks before his symptoms developed.2

Our case is unique in that it occurred in a 5 year old. Because of the inability to obtain an accurate history from our patient, the time from when he swallowed the magnets to the onset of symptoms is unknown. Finding the 5 magnets in one unit suggested that they were swallowed in close proximity to each other and that they adhered together in the child’s stomach and passed through simultaneously.3

Ingestion of magnets. The ingestion of a single magnet is not uncommon in children; detachable magnets are often found in a wide variety of children’s toys.3 Single magnet ingestion can be a relatively benign process in which the magnet behaves as any other ingested foreign body and passes without difficulty. Only about 1% of ingested foreign bodies require surgical intervention; however, it is necessary to quickly identify these cases to prevent morbidity and mortality.4

The ingestion of multiple magnets can lead to significant GI problems, and in one case resulted in death.5 Multiple magnet ingestion is a significant risk and early recognition is necessary for prompt surgical intervention. This aggressive approach should be considered even in patients with minimal symptoms that seem vague and nonspecific. 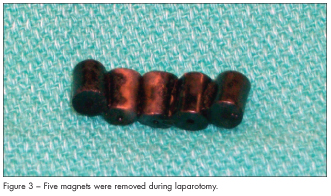