What Is This Intensely Pruritic Rash? 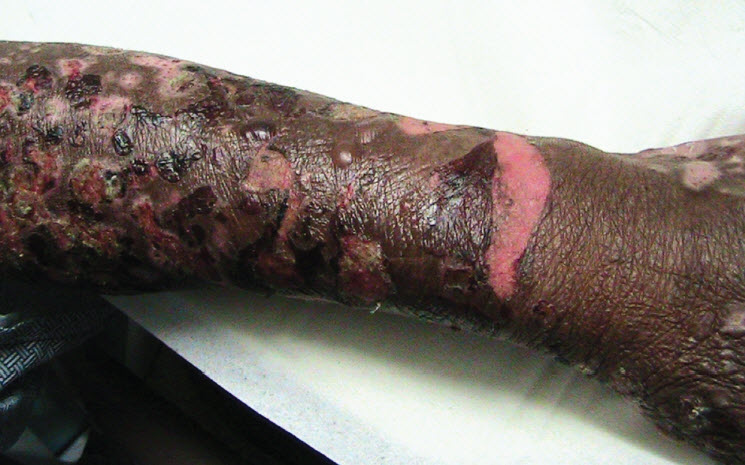 A 71-year-old woman presents to the emergency department for evaluation of a blistering, intensely pruritic generalized rash that started 5 days earlier. Multiple ruptured and intact hemorrhagic bullae are obvious on the hands, arm, neck, chest, back, and abdomen and to a lesser extent on the lower extremities. The mucous membranes are spared. The Nikolsky sign is absent. The patient reports recent use of furosemide for periodic leg swelling.

Results of a biopsy of one of the blisters and serological studies are pending. What is the likely clinical diagnosis? 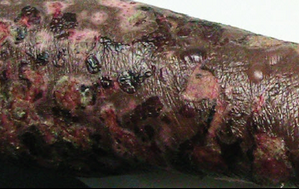 Given the patient’s history of furosemide use and acute onset of symptoms, drug-induced pemphigoid is the most likely diagnosis. The skin biopsy revealed a superficial infiltrate that contained neutrophils, lymphocytes, eosinophils, and occasionally plasma cells. Direct immunofluorescence was positive for a linear band of IgG and C3 at the dermal/epidermal junction.

In addition to furosemide, captopril, phenytoin, and ciprofloxacin have also been implicated in drug-induced pemphigoid. Antibodies against hemidesmosomal antigens BP230 and BP180 can be found. Treatment includes discontinuation of the offending medication and topical corticosteroids. This patient’s lesions began to resolve after she discontinued her medication and started treatment with oral methylprednisolone and topical triamcinolone.

Dermatitis herpetiformis typically has a herpetiform pattern (grouped vesicles). This rash often occurs on extensor surfaces and is not usually associated with use of a new medication. The timing of the outbreak and response after discontinuation of furosemide in this patient also counter this diagnosis.