Intussusception in an Adult

A 52-year old white woman with past medical history of right lower extremity deep venous thrombosis, hypertension, asthma, and degenerative joint diseases in both knees and cervical spines, presented to urgent care clinic with diffuse abdominal pain that had awakened her from sleep. She described the pain as waves of sharp pain on top of persistent diffuse abdominal pain.

She noted some nausea, but no vomiting, fever, chills, night sweats, or diarrhea. Vital signs were unremarkable, but abdominal examination was remarkable for tenderness in left upper quadrant and left flank region, with minimal rigidity in the left upper quadrant. There were no rebound and bowel sounds were normal. 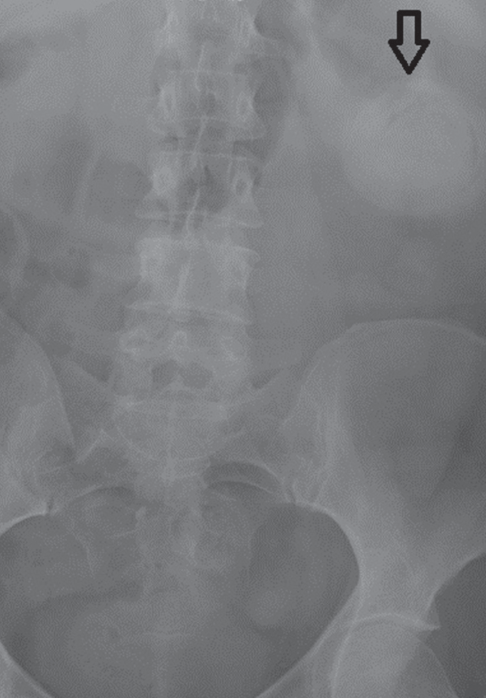 Laboratory investigations showed normal basal metabolic panel; white cell count was 17,100 cells/mm3, hemoglobin was 13.4 g/dL, and platelet count was 262,000/mm3. Erect and supine abdominal x-ray film showed a mass density in the left side of the abdomen which measures approximately 8 cm x 9 cm with circular lucencies(Figures 1 and 2). There were dilated small bowel loops with air fluid levels. CT examination of the abdomen with contrast noted colonic intussusception involving the distal transverse colon. The patient was admitted to the hospital.

On day 5 of admission, there was no resolution of intussusception and complete bowel obstruction took place. The patient was taken to the operating room; intraoperatively, colonic intussusception was noted with a large solid fecal bezoar resulting in fecal impaction in the splenic flexure, with associated ischemic changes and a small hematoma in transverse colon. The ascending and transverse colons were noted to be substantially redundant, but no other masses were identified. Pathology showed attenuated bowel wall with early ischemic change within the mucosal layer, fecal impaction, serosal fibrous adhesions and viable surgical margins.

Patient recovered uneventfully, and was scheduled to follow-up with gastroenterology in 2 to 3 weeks for followup colonoscopy. 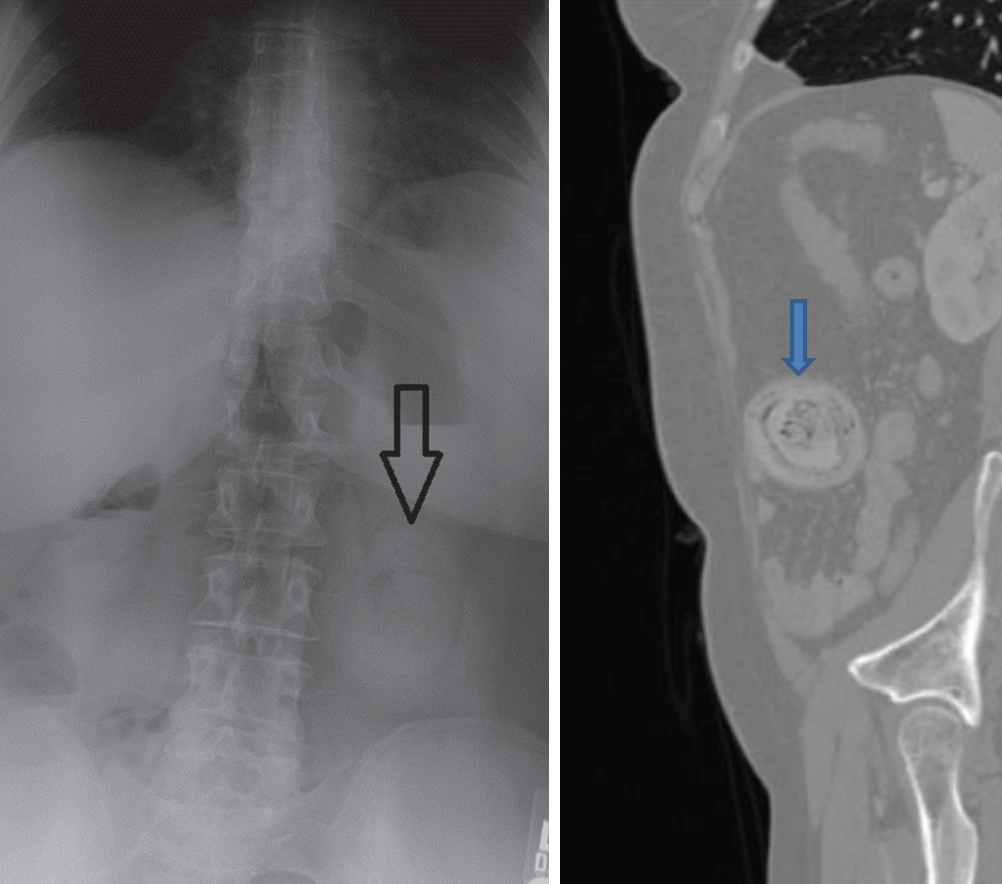 Discussion. Colonic intussusception is rare in adults, and is typically due to pathologic lead point within the bowel, most commonly due to malignancy.1,2 Therefore, there was a chance that the diagnosis of intussusception in this patient could have been missed. Careful history and clinical examination may elicit concerns for an uncommon disease. A hierarchical approach in investigation, grading from simple laboratory investigation such as complete blood count and plane abdominal radiographs to CT scan of the abdomen, offered a reasonable approach for the correct diagnosis.