A Collection of Lupus Manifestations 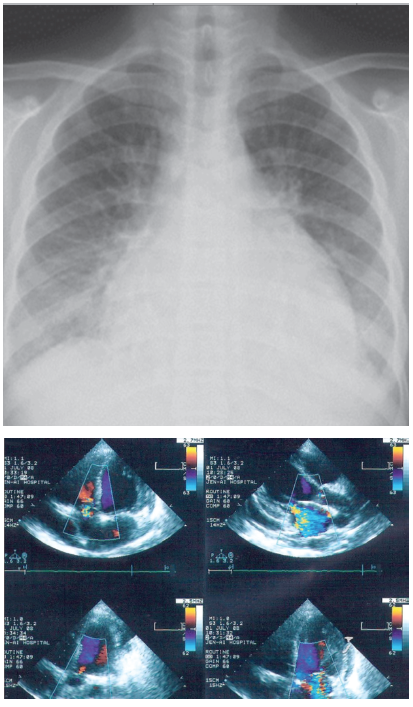 A 13-year-old girl was admitted to the inpatient cardiology unit because of progressive dyspnea. She had a history of shortness of breath off and on for the past 2 months, and her symptoms had worsened on the day of admission. She reported having general malaise, insomnia, a 10 kg weight loss, and amenorrhea for the past 4 months. She had no known drug allergies and her immunizations were up-to-date.

Physical examination. The patient appeared anxious at first meeting. Ear, eye, nose, and throat findings were unremarkable. Chest expansion was symmetrical, with clear breathing sounds. Heart rate was 150 beats per minute. A grade 3 to 4/6 systolic murmur was audible over the left sternal border fourth to fifth intercostal space. Her extremities were freely movable without edema.

Common clinical features of large pericardial effusion in SLE are Raynaud phenomenon, arthralgia, and lupus nephritis class III or IV. On further questioning, the 13-year-old girl in this case reported having arthralgia. She also had a systolic murmur, which is another common finding in patients with SLE.
The cardiomegaly with pericardial effusion in this patient prompted us to consider the differential diagnosis of this entity in children, which led to the evaluation for SLE.

Echocardiography is particularly sensitive and specific in detecting cardiac abnormalities, such as mild pericarditis, valvular lesions, and myocardial dysfunction. It should be performed periodically in patients with SLE.5

Serological findings in SLE typically include positive screens for antinuclear antibody and antidouble-stranded DNA antibody and low C4 and C3 complement levels.6 Cardiac involvement in children with SLE has been found to correlate significantly with the presence of anti-Ro and anti-La antibodies.3

Treatment. After excluding infective endocarditis, a short trial of high-dose corticosteroids can effect overall improvement in carditis of SLE.7 Prednisolone therapy has led to a dramatic decrease in pericardial effusion and improvement in left ventricular diastolic dysfunction in some patients with SLE.2

Cardiomyopathy that occurs relatively early in the course of SLE may lead to severe cardiac dysfunction despite corticosteroid therapy and appears to be responsive to cytotoxic therapy.7 Pericardial effusion with extensive capillary hyperplasia in SLE may be resistant to medical treatment and may require surgical fenestration.8

Outcome of the case. Our patient required cytotoxic therapy in addition to supportive extracorporeal membrane oxygenation therapy. She was treated in the pediatric ICU for 2 weeks and then received general ward care for another 2 weeks. During that time, her symptoms resolved and she was discharged.

A 30-year-old woman with systemic lupus erythematosus (SLE) and Raynaud phenomenon presented with fever (temperature up to 103°F), rash, and generalized body aches of 1 week’s duration. The rash—which arose on her face and spread to her hands, chest, and back—is asymptomatic. She denied exposure to sick persons and animals. Her medications included hydroxychloroquine and prednisone.

Laboratory tests. The erythrocyte sedimentation rate was 72 mm/h, and the level of white blood cell bands was elevated. A biopsy of a skin lesion was performed. 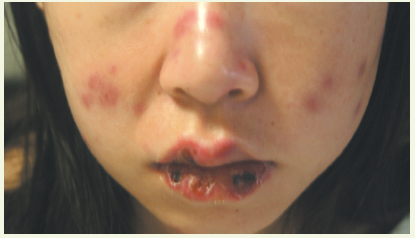 Discussion. The cause of SLE is unknown. This disease is mediated by pathogenic autoantibodies and immune complexes, which damage involved tissues.

Most cases of SLE occur in women, usually of childbearing age.

In this patient, the diagnosis was made 7 years earlier, when she presented with photosensitivity, leukopenia, malar rash, oral ulcers, proteinuria, and a positive test for lupus anticoagulant.

The presentation of SLE varies widely because multiple systems may be involved. Vascular involvement may be caused by thrombi, which can affect vessels of any size. The thrombosis may result from underlying vasculitis or antiphospholipid antibodies. Thus, both immunosuppressant and anticoagulation therapies are appropriate. 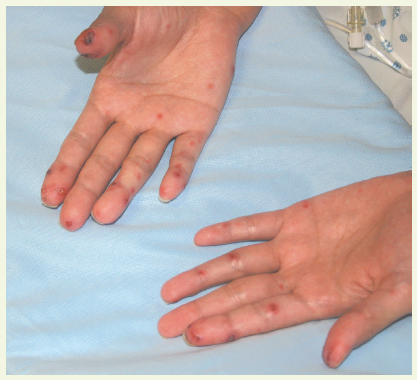 In addition to lupus-associated vasculitis, the following conditions were considered in the differential diagnosis:

• Stevens-Johnson syndrome is characterized by high fever, extensive bullae and necrosis, ulcers of the skin, and orogenital mucosa; all of those symptoms were absent in the patient. Skin biopsy demonstrated subepidermal bullae with lymphocytic infiltrates in the perivascular areas.

• Polyarteritis nodosa has a progressive course with exacerbations and remissions, which the patient did not report. This is a necrotizing vasculitis of the small and medium-sized muscular arteries, typically the renal and visceral arteries; the presentation depends on which organs are involved. Some patients have purpuric skin lesions, a biopsy of which reveals inflammation of the small blood vessels, particularly in the postcapillary venules.

Treatment. In this patient, magnetic resonance angiography of the chest, abdomen, and bilateral upper extremities revealed no large vessel involvement. She was treated with enoxaparin, methylprednisolone, and hydroxychloroquine during her hospitalization. A tapering regimen of prednisone was prescribed at discharge, 1 week after admission.

For several months, a 47-year-old woman had asymptomatic pigmented nodules on her thighs. She had a several-year history of systemic lupus erythematosus (SLE), which had been well-controlled with an oral antimalarial agent. She was concerned about the rash and wondered whether it is related to her SLE. 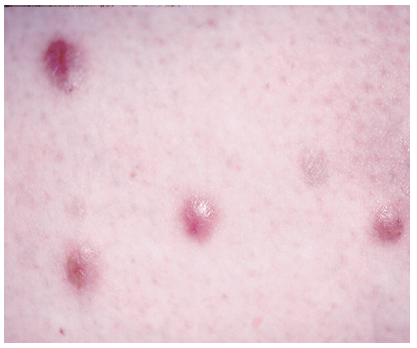 An antimalarial would not produce this type of reaction. Nodular vasculitis and folliculitis were symptomatic. Sarcoidosis may be ruled out by biopsy.

Outcome of the case. This patient had dermatofibromas lesions that are sometimes associated with SLE.1 No treatment is necessary for the benign condition. ■

A 28-year-old man noticed a round hairless patch on his scalp after he shaved his head 2 years prior. At the time, the patient thought he had sustained an injury to the site. The asymptomatic, solitary lesion has not changed since it first appeared. The patient took no medication. 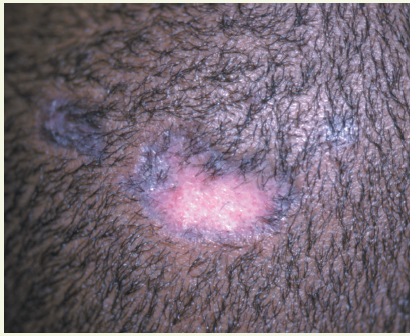 Discussion. The patient had discoid lupus erythematosus (DLE). Closer examination revealed a similar lesion inside 1 ear that the patient had been unaware of. The presence of atrophy, scaling, and an erythematous border supports the diagnosis of DLE in the absence of a biopsy. If there is any doubt about the diagnosis, a biopsy is recommended.

Alopecia areata is not associated with erythema and therefore can be ruled out. Secondary syphilis is characterized by multiple lesions. Neither sarcoidosis nor seborrheic dermatitis is associated with atrophy or alopecia. Systemic lupus erythematosus was excluded by blood testing and physical examination.

Physical examination. A 40-year-old woman’s hand demonstrated typical findings of primary Raynaud phenomenon. Her fingers turned white (as shown), then blue, then red. They were quite painful. The hand of her friend was shown for comparison.

The blanching and numbness or pain is caused by exaggerated vasoconstriction in response to cold. In addition to the fingers, the toes, ear lobes, and tip of the nose can be involved. 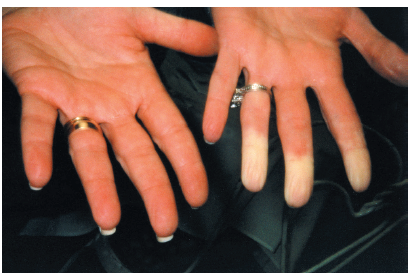 Discussion. Those with Raynaud phenomenon may have underlying disease, such as scleroderma, lupus, rheumatoid arthritis, Sjögren syndrome, or carpel tunnel syndrome; however, this is rare.

Treatment. Avoidance of cold is recommended. In patients who have significant pain and numbness, a calcium channel blocker may decrease the severity of the vasoconstriction.

Outcome of the case. The patient's symptoms resolved after 20 minutes of hand warming.

A 13-year-old girl complained of tiredness and an achy feeling that started 2 weeks prior. She had persistent fevers (temperature up to 102°F) and an erythematous facial rash above her eyebrows that extended to her cheeks and nasal bridge and spared the nasolabial folds. She had applied a topical acne medication to the rash but noted no improvement. She also reported decreased oral intake because of discomfort from palatal ulcers. She had no significant medical or family history.

The patient was hospitalized, and the rheumatology team was consulted. Systemic lupus erythematosus (SLE) was diagnosed on the basis of the clinical history and physical findings, particularly the malar facial rash and oral ulcers. Laboratory studies supporting the diagnosis included the elevated ANA titer; hypocomplementemia; anemia; nephritis, with an elevated creatinine level for age; elevated levels of hepatic transanimases; the positive direct Coombs test result, reflective of a hemolytic process; and the presence of anti-Smith antibodies.1

Treatment. After treatment with intravenous methylprednisolone sodium succinate, she clinically improved and was discharged. Her daily medications included prednisone, hydroxychloroquine, and an H2 blocker for gastric coverage while taking oral corticosteroids.2 Outpatient follow-up with rheumatology and ophthalmology were scheduled because of the increased risk of retinitis with use of hydroxychloroquine.3

Discussion. SLE (lupus) is a chronic autoimmune disorder characterized by multisystem microvascular inflammation, with the production of autoantibodies. Recurrent episodes of relapse and remittance occur. A defined cause is unknown. Factors involved in the development of SLE are race, genetics, hormonal changes, and the environment.4 The incidence in patients aged 10 to 18 years varies among different populations; in the United States, it is highest among African Americans.5 As with other autoimmune diseases, females are affected more often than males. Onset of symptoms typically occurs after age 5 years; the incidence increases after age 10 years.1 Hormonal changes associated with puberty and pregnancy can trigger the disease.6 Genetic probability is increased in first-degree relatives with lupus and in identical twins.4

Commonly reported symptoms of lupus at initial presentation are fever, fatigue, and malaise of several months’ duration. Arthritis of the small joints in the hands and wrists and renal disease (nephritis or nephrosis) may manifest during this time.1 Presence of a malar rash is helpful for diagnosis; however, it occurs in only two-thirds of patients with SLE. The rash is usually a fixed (flat or raised) erythema that tends to spare the nasolabial folds. It can be painful or pruritic.

Other cutaneous features are photosensitivity, a discoid rash that develops in sun-exposed areas (which may appear plaquelike with follicular plugging and scarring), and alopecia of the temporal regions.1 Hematological abnormalities of SLE are anemia, cytopenia, and thrombocytopenia.7 Associated cardiopulmonary conditions include pericarditis, endocarditis, coronary artery disease (early-onset atherosclerosis), and pleural disease.4

Neuropsychiatric manifestations (such as loss of academic performance, depression, and social isolation) can be indicators of SLE; thus, it is important to perform a workup for lupus in patients with isolated neuropsychiatric findings.8 More severe neurological presentations are seizures (20% of patients), and psychosis.9

Treatment. Overall, the prognosis for patients with lupus is good. Poor outcomes are a result of limited access to healthcare and nonadherence to treatment regimens, which can lead to neurological complications, intercurrent infections, and extensive renal disease (such as diffuse proliferative glomerulonephritis).10 Survival rates are cited as 100% at 5 years and 85% at 10 years after diagnosis.11 The Lupus Foundation of America is a helpful resource for clinicians and families.