A Case of Varicella Pneumonitis 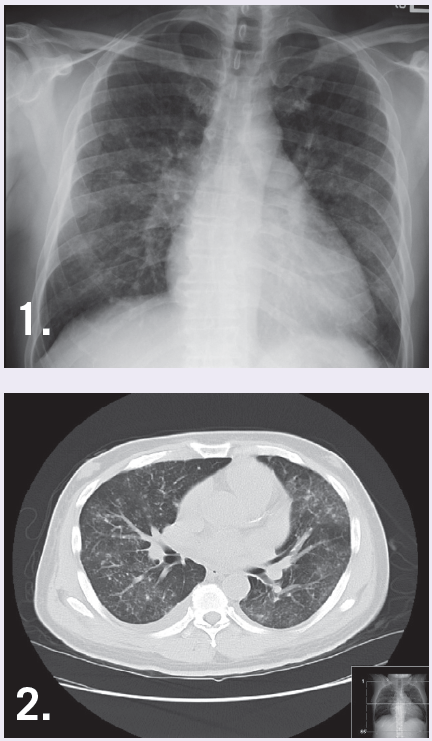 Physical examination. On arrival to the hospital, he was normotensive, with a respiratory rate of 24 breaths per min, an adequate saturation on room air, and noted to be in mild distress. Lung auscultation revealed dry crackles over posterior lung fields; heart sounds were normal without murmurs or gallops and mild pitting leg edema was present.

The skin examination revealed innumerable macular, popular, and vesicular lesions over an erythematous base—spread over face, trunk, and upper and lower extremities.

Treatment. The patient was started on IV acyclovir initially adjusted to renal function, and later upped to a full dose. Contact isolation, supplemental oxygen, and diphenhydramine were administered for itching. Repeat echocardiogram was unchanged with left ventricular ejection fraction of 25%. Medical treatment for heart disease was optimized. He completed 7 days of intravenous acyclovir, demonstrated clinical improvement, and was safely discharged home.

Discussion. The incidence of varicella in adults has increased in recent years.1 One in 400 adults with chickenpox develop pneumonia,2 which is rare but still the most common complication of all. Diagnosing varicella pneumonia in an adult with extensive heart disease can be challenging and sometimes missed.

Early identification of chickenpox and its complications (ie, pneumonia) is important since it has a mortality of up to 33%.1 Our patient had the typical rash of varicella, which was not clearly identified on arrival, until close reexamination of the skin (description of the rash) and the development of fever. The initial clinical presentation and chest x-ray were misleading given his extensive cardiac history.

A constellation of clinical and radiological findings (eg, pneumonitis pattern on CT) lead to a more accurate diagnosis and successful management. Adults with chickenpox should always get a chest x-ray to rule out pneumonia. The diagnosis can be masked by underlying cardiopulmonary diseases. Early treatment should be started (<12 hour) as soon as the patient is diagnosed, as this has shown to improve mortality.2