ALEXANDER K. C. LEUNG, MD—Series Editor
Dr Leung is clinical professor of pediatrics at the University of Calgary and pediatric consultant at the Alberta Children’s Hospital. 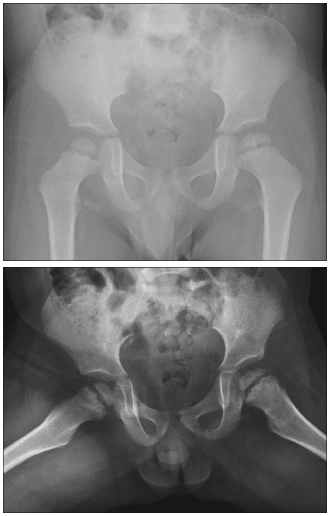 Three-year-old boy with intermittent pain in the calf and ankles of both legs for the past year. The pain usually occurred at night and was severe enough to wake him from sleep. Family reported that this was the second painful episode in the past month. Child was able to participate in normal daily activities. He had no difficulty in ambulation; no limping or morning stiffness; and no fevers, fatigue, or easy bruising.

Meyer dysplasia, also known as dysplasia epiphysealis capitis femoris, is a developmental disorder of the hip manifested by delayed irregular ossification of the femoral epiphysis. The dysplasia most frequently develops in children aged 2 years and usually resolves by age 6 years without any treatment.1 This rare condition can be easily mis­taken for other disorders of the hip, in particular Legg-Calvé-Perthes disease (idiopathic osteonecrosis or avascular necrosis of the capital femoral epiphysis).

INCIDENCE AND PATHOPHYSIOLOGY
Meyer2 estimated that close to 10% of patients with Legg-Calvé-Perthes disease have radiological findings that correspond to dysplasia and not necrosis. After a review of the clinical and radiological features of 578 children (619 hips), Rowe and colleagues3 found that 17 children (27 hips) had findings consistent with Meyer dysplasia. Meyer dysplasia occurs 5 times more often in boys and has a higher familial frequency than other hip disorders.3

Meyer dysplasia is a misnomer because it is not a true dysplasia. Rather, the delayed irregular ossification has been traced to circulatory disturbances.1 Some authors attribute Meyer dysplasia to congenital hypoplasia of femoral epiphysis.4 Others postulate that the dysplasia, with its spontaneous resolution, may be a normal variant of ossification of the femoral head.

In Meyer dysplasia, the ossification center, in place of a normal single unit, consists of a small epiphyseal nucleus composed of multiple independent bony foci.3 These foci gradually grow and finally fuse into a single center. The average age of fusion of the multiple foci is 5 to 6 years. Before fusion, the femoral head is irregular in shape and texture.

CLINICAL MANIFESTATIONS
Clinical signs, such as leg pain, limping, and limitation of movement, are usually mild and intermittent or absent. The disorder is bilateral in about 50% of patients, whereas only 10% of patients with Legg-Calvé-Perthes disease have bilateral involvement.5 Patients with bilateral Meyer dysplasia may have a waddling gait; some present with short stature.

DIAGNOSTIC STUDIES
Meyer dysplasia is usually discovered incidentally on radiographic studies for other reasons. Radiographs show marked delay in the development of the femoral epiphysis nucleus. Normal ossification occurs on average at 4 months of age, although it may be considered normal up to age 11 months.7 The pathological finding is delayed femoral epiphyseal ossification, which typically occurs at age 2 years.8 Retarded maturation may be apparent in other parts of the skeleton as well. Patients with bilateral changes on hip radiographs require further evaluation for hypothyroidism, spondylo-epiphyseal dysplasia tarda, pseudo-achondroplastic dysplasia, and multiple epiphyseal dysplasia in addition to Meyer dysplasia. 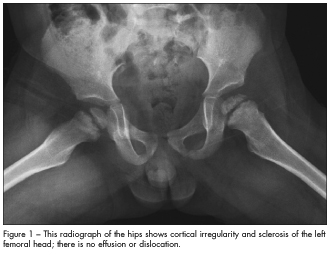 Bone scans are normal in Meyer dysplasia. MRI scans show multiple centers of ossification of the femoral head with normal signal intensities in all sequences; these findings are suggestive of homogenous vascularization of epiphyseal cancellous bone, articular cartilage, physis, and cortical bone. Reduced height of the cartilaginous epiphysis may also be observed.

This patient’s radiographs showed cortical irregularity and sclerosis of the left femoral head, without effusion or dislocation (Figure 1). Because these findings may also represent Legg-Calvé-Perthes disease, MRI was performed to confirm the diagnosis of Meyer dysplasia (Figure 2).

Meyer dysplasia is difficult to distinguish from Legg-Calvé-Perthes disease, especially in its active stage. This often leads to unnecessary diagnostic procedures and hospitalization. Radiographic findings 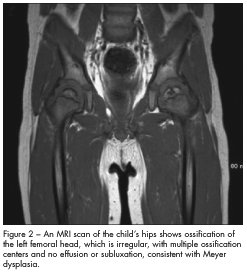 suggestive of Legg-Calvé-Perthes disease include uniform massive condensations, fragmentation, subchondral fractures, and collapse of the capital femoral epiphysis. Legg-Calvé-Perthes disease is characterized by abnormal bone scan findings and bone marrow signals in the femoral head on MRI scans. Bone scans show a photopenic area in the proximal femoral epiphysis, caused by interruption in blood supply to the epiphysis.

PROGNOSIS
Meyer dysplasia is benign and self-limited. No treatment is necessary other than parental reassurance and close clinical and radiologic follow-up by a pediatric orthopedic surgeon to monitor for the rare transition to Legg-Calvé-Perthes disease.9 Steady unification and growth of the epiphysis, with a corresponding decrease in pain, usually occurs over 3 years. The outcome is a normal hemispherical femoral head, although some patients may have diminished epiphyseal height. Functionally, the hip is normal. Children with smaller than normal femoral head for children of the same age or with a normal hip in unilateral disease may have biomechanically induced degenerative joint changes in adulthood.5,9,10  ■