A 17-year-old presented to the emergency department (ED) after his mother witnessed him having a syncopal episode. He also complained of intermittent left-sided chest pain, which he described as nonradiating, sharp, pulsating, and partially alleviated by walking. He rated the pain’s intensity as 6 on a 10-point scale.

Four days before presentation, he had experienced transient lightheadedness, diaphoresis, and left-sided chest pain, which had spontaneously resolved. Two days later, similar symptoms awoke him from sleep and lasted for a few minutes; during that episode, he also was dyspneic, collapsed while getting out of bed, and regained consciousness spontaneously.

The review of systems was otherwise unremarkable, and there was no family history of cardiovascular, oncologic or neurologic disease. He denied drug use. 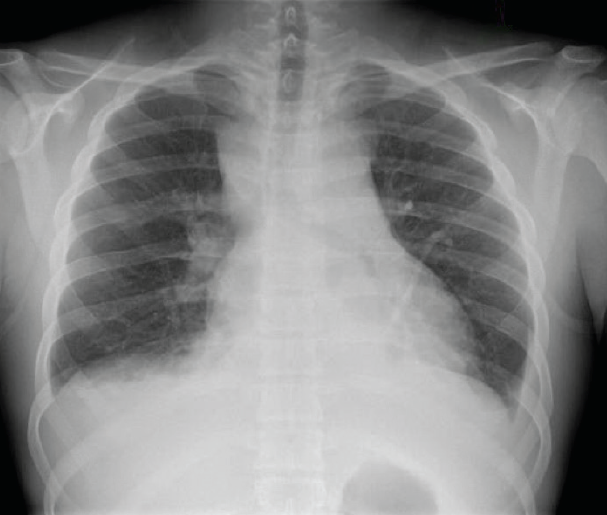 On physical examination in the ED, he was diaphoretic and in moderate physical distress. He was afebrile with normal vital signs. Cardiac examination revealed a regular heart rate and a nondisplaced point of maximal impulse. There were no murmurs, rubs, gallops, or jugular venous distention. Chest wall examination results were unremarkable, with equal and clear breath sounds. Cranial nerves were intact. He had nontender, mobile lymphadenopathy of the left anterior cervical chain, bilateral supraclavicular nodes, and right axillary nodes. The rest of the examination findings were normal.

Results of cardiac enzymes tests, urinalysis, and electrocardiography (ECG) were normal. An initial chest radiograph was ordered, the results of which are shown below.

Based on his presentation and imaging study results, what is causing this teen’s chest pain and syncope?

Figure: A chest radiograph of a 17-year-old with chest pain and syncope showed a wide mediastinum and prominent cardiac silhouette.

Chest pain and syncope are common pediatric symptoms. The most common causes are benign and rarely life threatening, and they include musculoskeletal, pulmonary, psychogenic, and gastrointestinal etiologies.1,2 Cardiac disease accounts for only 1% of cases of pediatric chest pain and syncope.1-3

Although malignant etiologies of chest pain and syncope can be present in adults,4-7 they are rare in children. In a study of 3,700 children with chest pain, for example, only 1.3% of cases were associated with syncope.2 In adults, few published cases describe syncope without chest pain as the presenting symptom in a malignancy-associated cardiac mass.8,9 A report of a case in an adolescent describes exercise-induced syncope with superior vena cava syndrome secondary to a mediastinal mass, but the patient had no chest pain or respiratory symptoms.10

Given the frequency of chest pain and syncope in the pediatric population, standardized clinical assessment and management plans (SCAMPs) are available in many states to help reduce unnecessary testing.1,2,12-15 According to SCAMPs for pediatric syncope and chest pain, only an abnormal cardiac history and examination findings, along with an abnormal ECG result, warrant further testing and referral to a specialist. Otherwise, reassurance and supportive treatment are recommended. Furthermore, abnormal lymphadenopathy on physical examination is not included in SCAMP criteria for further testing, and chest imaging is not part of the recommended diagnostic workup. However, our patient’s case demonstrates that benign cardiac evaluation results and a normal ECG do not preclude the need for further testing. 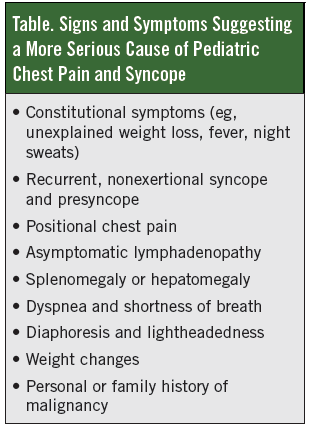 Carlos A. Pérez, MD, is a resident in the Division of Child and Adolescent Neurology in the Department of Pediatrics at the University of Texas Health Science Center at Houston.

David E. McMann, MD, is a resident in the Division of Community and General Pediatrics in the Department of Pediatrics at the University of Texas Health Science Center at Houston.

Lynnette Mazur, MD, MPH, is a professor in the Division of Community and General Pediatrics in the Department of Pediatrics at the University of Texas Health Science Center at Houston.

James R. Murphy, PhD, is a professor in the Division of Pediatric Infectious Diseases in the Department of Pediatrics at the University of Texas Health Science Center at Houston.

Guenet Degaffe, MD, is an assistant professor in the Division of Community and General Pediatrics in the Department of Pediatrics at the University of Texas Health Science Center at Houston.