What is the cause of this woman’s tender rash?

This 51-year-old woman presented with a 2-day onset of a tender rash on her arms, legs, and hands. She had recently been diagnosed with rheumatoid arthritis and had been placed on hydroxychloroquine, 200 mg daily, a month prior. She also had developed an upper respiratory infection 4 days prior to the rash for which she had not yet sought treatment.

What is the cause of this woman’s tender rash? 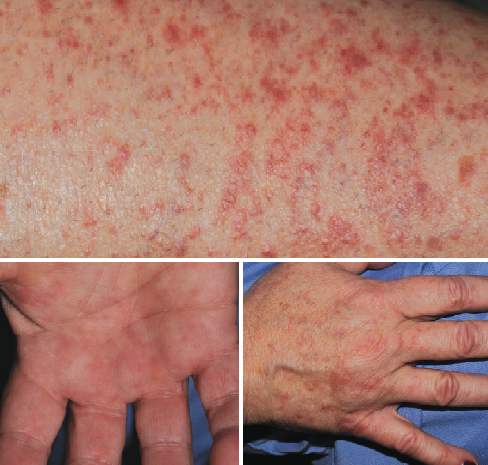 A biopsy confirmed the clinical impression of erythema multiforme, supporting the clinical suspicion based on a tender rash with palmar involvement. The challenge was to determine whether this was a drug reaction in order to know whether to continue or discontinue the hydroxychloroquine. Given the timing, it was felt she was most likely reacting to the upper respiratory infection, but given the multiple options still available for her rheumatoid arthritis, we recommended that she discontinue the medication. If her arthritis did not respond to other therapeutic options, it would be considered a possibility to reintroduce the medication. This rash was more erythematous rather than purpuric, making it less likely to be of vasculitic etiology. Delayed hypersensitivity reactions to medications do occur and can be severe, so performing a skin biopsy will help guide how aggressively to monitor and treat the patient.