A 3-year-old girl presented to the emergency department with a chief concern of acute ataxia. The mother reported that the child had appeared off-balance the previous evening, but she thought it had been merely a result of fatigue. In the morning, the mother brought the girl to the hospital, because the abnormal gait—described as “falling toward the right”—had remained.

The child had had no access to medications, and there was no history of nausea, dizziness, confusion, or slurred speech. The girl’s past medical history was unremarkable, and her vaccinations were up to date.

Physical examination revealed a smiling toddler with normal vital signs and appropriate speech development for her age. Strength, sensation, and cranial nerves were intact, but horizontal nystagmus was noted bilaterally. Her gait was ataxic with cross-stepping of feet, and she was unable to walk without support. Mild dysmetria was noted on finger-to-nose examination, and her deep tendon reflexes were absent.

Screening laboratory study results, including a comprehensive metabolic panel, a complete blood count with differential, urinalysis, a respiratory viral panel, a C-reactive protein test, and a urine drug screen, were within normal limits. Results of computed tomography of the head and magnetic resonance imaging also were normal.

By the second day of admission, the child’s ataxia was not improving. Further questioning of the family revealed that the child often played in the woods. Physical examination was repeated, during which an engorged, large, brown-tan tick was found embedded in the girl’s scalp. The engorged tick was removed, and within 24 hours, full remission of symptoms occurred. Pathology tests confirmed the specimen to be an American dog tick (Dermacentor variabilis), a common cause of tick paralysis. 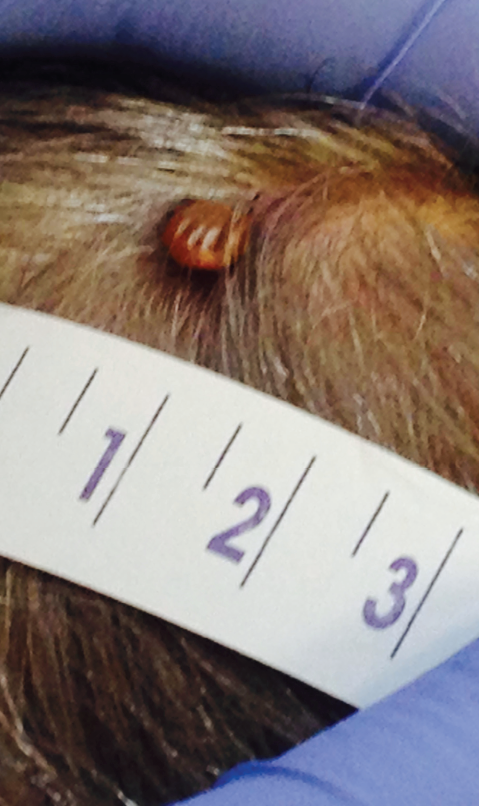 The differential diagnosis of acute ataxia in a child is vast. The most common causes are acute cerebellar ataxia, toxic ingestion, and Guillain-Barré syndrome (GBS).1 Other less-common causes of acute ataxia include trauma, malignancy, labyrinthitis, and psychiatric disorders. If a fever is present, the diagnosis of tick paralysis is unlikely. The white blood cell count and results of cerebrospinal fluid (CSF) analysis also characteristically are normal.2

Tick paralysis most commonly is misdiagnosed as GBS.3 Both conditions can present as ascending ataxia progressing to paralysis, but GBS typically is associated with abnormalities on CSF analysis. Deep tendon reflexes are characteristically absent in tick paralysis.

Tick paralysis is not infectious but rather is caused by toxins from the tick’s saliva. The exact pathophysiology of tick paralysis is unknown, but the condition is thought to result from slowed nerve conduction velocity and amplitude via sodium flux at axonal membranes.4,5

Symptoms of tick paralysis typically begin 4 to 7 days after attachment and consist of paresthesia, fatigue, and weakness. These symptoms can progress to ataxia and eventual respiratory paralysis. Ataxia most often is ascending but also can present bilaterally or unilaterally. Despite the paresthesia, sensation often remains intact.

Treatment is removal of the tick, after which the condition of most patients improves within hours. Certain tick species are associated with a slightly differing clinical course, so quick pathologic identification of the tick is important. While tick paralysis has no long-term sequelae when treated appropriately, the reported mortality rate of untreated or misdiagnosed cases is as high as 12%,6,7 making the accurate diagnosis of tick paralysis imperative.n