A 15-year-old girl presented with painful lesions on both legs of 7 days’ duration. The lesions initially had been erythematous but had turned brownish in the past 2 days.

Two weeks earlier, she had had a fever, a sore throat, enlarged tonsils with tonsillar exudates, a strawberry tongue, and enlarged, tender anterior cervical lymph nodes. A throat culture at that time grew group A β-hemolytic streptococcus. She had been treated with oral penicillin V for 10 days. Her past health was otherwise unremarkable.

Physical examination showed numerous round, tender, brownish, subcutaneous nodules on the extensor surfaces of her legs. The nodules measured 1 to 3 cm in diameter with indistinct borders. The rest of the physical examination findings were unremarkable. 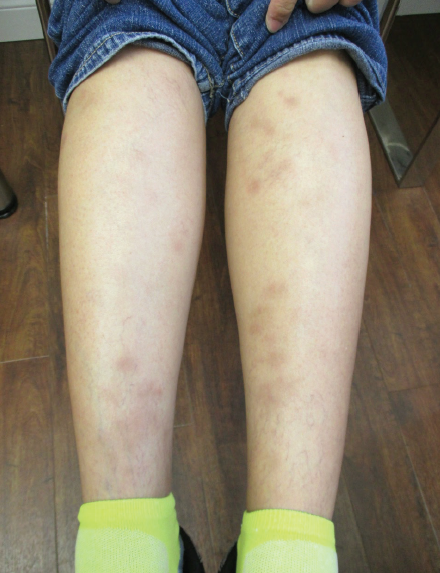 Erythema nodosum is the most common form of panniculitis, or inflammation of subcutaneous fat, in children and adults alike.1,2 The disorder is characterized by the acute onset of painful, subcutaneous nodules bilaterally on the pretibial legs. The condition was first described by Robert Willan in 1798.3 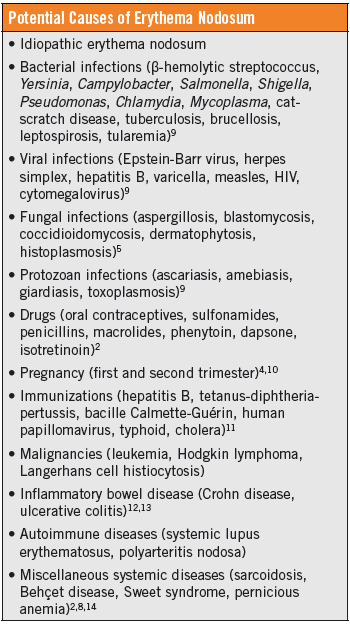 The potential causes of erythema nodosum are shown in the accompanying Table.2,4,5,8-14 Approximately 50% to 55% of cases are idiopathic.1 Worldwide, β-hemolytic streptococcal infection (especially pharyngitis) is the most frequent identifiable cause of erythema nodosum, followed by gastrointestinal infections, particularly Yersinia enterocolitica.2,4,5 Tuberculosis is an important cause of erythema nodosum in countries where tuberculosis is endemic.4 In North America and Europe, sarcoidosis is an important cause.4,5 In general, infections account for more than one third of pediatric cases.2

Erythema nodosum is thought to result from an exaggerated type IV delayed hypersensitivity response to various triggering antigens, which leads to immune complex deposition and complement activation within the subcutaneous fat.5,7,14 Reactive oxygen intermediates produced by activated neutrophils in early lesions may lead to inflammation and tissue damage.2,4,7 The predilection for the pretibial areas suggests that physical factors may play a role in disease development.7

The classic histologic picture is that of septal panniculitis without associated vasculitis.14 Histologic findings of early lesions include septal edema and thickening with a predominately neutrophilic infiltrate.1 Older lesions show enlargement of the septa with fibrosis, lymphocytic and histiocytic infiltration, and multinucleated giant cells.1,8 Miescher radial granuloma refers to a collection of histiocytes around a small cleft-like space within the septa or at the septa/lobule interface and is a histologic marker of erythema nodosum.1,2,7,8

Erythema nodosum is often preceded by a nonspecific prodrome lasting 1 to 3 weeks, which can include fever, fatigue, malaise, cough, and arthralgias.1,2,11 Cutaneous lesions then follow, which typically present with an acute onset of slightly warm, erythematous, raised, tender, rounded or oval, subcutaneous nodules on the extensor surfaces of the legs, most commonly on the pretibial areas.11 Less commonly, lesions can occur elsewhere on the body, including the ankles, knees, anterior thighs, trunk, upper limbs, neck, and face.1,2,13 In children, lesions rarely may occur on the palms and soles.2 The nodules are poorly demarcated because of their subcutaneous anatomic location and often are more easily palpated than visualized.1 Typically, the lesions are bilateral and symmetric, ranging from 1 cm to a few centimeters in diameter.1,2 Occasionally, nodules may become confluent, resulting in erythematous plaques.9

Within a few days, the color changes from red to purple and brown. The nodules then slowly involute and subsequently evolve into yellow-brown or yellow-green, bruise-like macules (which are often referred to as erythema contusiformis) in approximately 2 to 8 weeks.7,8,11 Crops of new lesions may appear for 3 to 6 weeks.8 As such, older lesions may coexist with new nodules as they occur.

The nodules are self-limiting and resolve without ulceration, scarring, or atrophy, usually in 2 to 8 weeks.1 In about 15% to 30% of cases, the disease may recur.4 Complications are those that would be expected as a result of the underlying disease.2

The underlying cause should be identified and treated or removed if possible. Otherwise, treatment is mainly symptomatic. Bed rest, leg elevation, and restriction of physical activity until resolution of lesions may be beneficial and can help prevent exacerbations.2,7 Compression stockings also can be beneficial. Pain relief can be achieved with the use of nonsteroidal anti-inflammatory drugs (NSAIDs) such as naproxen and indomethacin.6,7 NSAIDs, however, should be avoided in the treatment of erythema nodosum associated with inflammatory bowel disease.2 Oral potassium iodide is another treatment option.6 Intralesional or oral corticosteroids can be considered if rapid involution of the nodules is desired.2