ABSTRACT: Sporotrichosis is an infection caused by a fungus called Sporothrix schenckii. Florists, gardeners, and outdoor workers who may suffer injury inflicted by plant thorns, or interact with sphagnum moss and straw, are susceptible to the disease. Precise identification of S schenckii requires histopathological assessment conducted with periodic-acid Schiff staining. The accepted treatment of sporotrichosis varies around the world—from potassium iodide to itraconazole.

Sporotrichosis is caused by the geophilic or saprophytic fungus, Sporothrix schenckii. Medical student Benjamin Schenck first cultured and identified it in 1898 after it presented in a patient with ascending nodules of the upper extremity.1 S schenckii enters its host through a cutaneous or subcutaneous wound or by pulmonary inhalation of conidia. Additionally, a few rare cases of zoonotic transmission from felines have been reported in the United States.2 S schenckii exhibits its thermal nature through a dimorphic existence—as conidiospores at room temperature (26°C) and hyphal structured mold or yeast in vivo (37°C).3

Precise identification of S schenckii requires histopathological assessment conducted with periodic-acid Schiff (PAS) staining. PAS staining will display individual cigar-shaped to rounded budding yeast, with occasional asteroid bodies surrounding the yeast cells.3 S schenckii can also be cultured on Sabouraud glucose agar at 20°C, displaying as white to cream colored colonies which progressively darken over a 2- to 3-week period.4 Although no geographic limitations exist with this disease, there is a strong occupational correlation with florists, gardeners, and outdoor workers who may suffer injury inflicted by plant thorns or interact with sphagnum moss or straw. These associations have led to a nickname of “rose gardener’s disease” being bestowed upon this condition.5 Clinical suspicion for sporotrichosis rests greatly upon disease onset, indolent progression, and the presence of cutaneous nodules in a linear array along locations of lymphatic drainage. Risk factor recognition and appropriate identification techniques remain key aspects to successful diagnosis of this disease.

History. A 50-year-old white female presented to the emergency department complaining of a painful rash. The rash first appeared on her right forearm 1 year prior and gradually spread to involve her chest, back, and all 4 extremities. Recent involvement of the fingers and toes, as well as shallow oral ulcerations in the mouth, resulted in increasing pain and prompted her to seek emergency medical treatment.

Three months prior to her admission she was seen by a local dermatologist who biopsied her skin and reported her condition as “fungal in nature.” Her past medical history was significant for seizures, anxiety, fibromyalgia, rheumatoid arthritis (RA), chronic obstructive pulmonary disease, and a closed head injury.

The patient was a smoker with a 35-pack a year history and consumed alcohol weekly, but denied illicit drug use. Her medications included fluoxetine, quetiapine, gabapentin, and clonazepam.

She admitted to occasional shortness of breath upon exertion, but denied any other symptoms. She also denied a history of HIV or immunodeficiency, but reported that her 2 sons, conceived by separate fathers, were diagnosed with chronic granulomatous disease (CGD) during childhood. Additionally, the patient reported spending a significant amount of time gardening vegetables, plants, and rosebushes.

Figure 1. Violaceous nodules spreading along the lymphatic distribution of the right upper extremity.

Oral examination revealed multiple painful, shallow, intraoral ulcerations with a defined border (all measuring <1 cm), along with upper and lower vermillion ulcerations of 1.5 cm, respectively. Left inguinal lymphadenopathy was also palpable on exam. Vitals were stable but did show a low-grade fever of 99.9°F. Laboratory testing revealed an absolute neutropenia (1.41 x 10^3 µL), absolute lymphocytopenia (0.83 x 10^3 µL), and leukopenia (2.7 x 10^3 µL). Kidney and liver function were within the normal limits. A chest radiograph displayed hyperinflation of the lungs in the absence of infiltrates.

The patient was subsequently admitted to the inpatient medical floor for neutropenic fever, and an infectious disease consult was obtained. Her fungal and bacterial blood cultures, as well as HIV testing, were negative. The patient tested negative for hepatitis B and hepatitis C. A bone marrow biopsy with karyotyping was also negative.

Additionally, a dihydrorhodamine (DHR) flow cytometry assay was performed to evaluate the function of the patient’s nicotinamide adenine dinucleotide phosphate oxidase, an enzyme complex responsible for superoxide generation and subsequent activation of granule proteases in phagocytes for microbe desctruction. This provides an indirect measure of the patient’s neutrophil function and oxidative burst.6 Our patient’s DHR results (n=1437) indicated the presence of an underlying defect in phagocyte oxidase production highly specific for a primary immunodeficiency known as CGD. This functional loss increases patient susceptibility to recurrent bacterial and fungal infections typically affecting the lung, liver, lymph nodes, and skin.7

Treatment. Therapy was initiated with IV itraconazole at 5 mg/kg, topical 2% ketoconazole cream, and a petroleum-based ointment to assist in the healing of the digital fissures. The patient responded to treatment with resolution of her low-grade fever, but maintained a persistent neutropenia throughout. Moderate improvement was noted in her cutaneous lesions. After 4 days of hospitalization, she was discharged with instructions to continue oral itraconazole at 200 mg/day, topical 2% ketoconazole cream twice a day, and topical petroleum ointment.

The patient was instructed to continue lifelong treatment with bactrim and PO itraconazole, dosed at 5mg/kg, for empiric prevention of future infections. Follow-up appointments with infectious disease and dermatology was also scheduled.

Unfortunately the short-term progression of our patient’s condition was not monitored as she did not return for scheduled appointments. Two months following her initial discharge she was readmitted to McLaren Oakland Hospital for a condition unrelated to her sporotrichosis, at which time her cutaneous lesions had decreased in both number and size.

Recently, the patient presented in a septic state with similar cutaneous lesions as demonstrated on her initial visit 14 months prior. The patient was readmitted to McLaren Oakland Hospital and received IV therapy of amphotericin B along with similar topical treatment administered in previous hospitalizations. Amphotericin B was removed from the treatment regimen after the patient developed acute kidney injury. Following discharge the patient failed to maintain follow-up relationships with recommended physicians.

Figure 3. Numerous nodules coalescing into plaques on the superior aspect of the posterior thorax.

The mycosis, S schenckii, exists in both saprophytic and geophilic environments prior to its introduction in humans. The invasion of a human host typically occurs through an abrasion of the cutaneous and subcutaneous tissue. A span of days or weeks can pass from the moment of initial inoculation to the emergence of a well-circumscribed nodule or plaque. The lesions are small, firm, dusky red to violaceous in color and pain, if present, is generally mild. The primary lesion characteristically ulcerates but may remain intact with overlying erythema.5

Disease progression occurs along lymphatic channels proximal to the primary lesion and is altered by numerous factors. The thermal tolerance, magnitude, and virulence of the mycosis, as well as the strength of the host’s immune system and depth of cutaneous encroachment, all play a role in determining the extent of the disease.8 Additionally, the quantity of traumatic inoculations, cutaneously or hematogenously, in patients with predisposing immunosuppressive factors such as AIDS, diabetes mellitus, gastric cancer, and RA greatly increases the risk of disease dissemination.9,10 Of the patient population presenting with this disease, >5% of affected individuals will exhibit dissemination.11 The variations of sporotrichosis disease states are summarized in the Table. 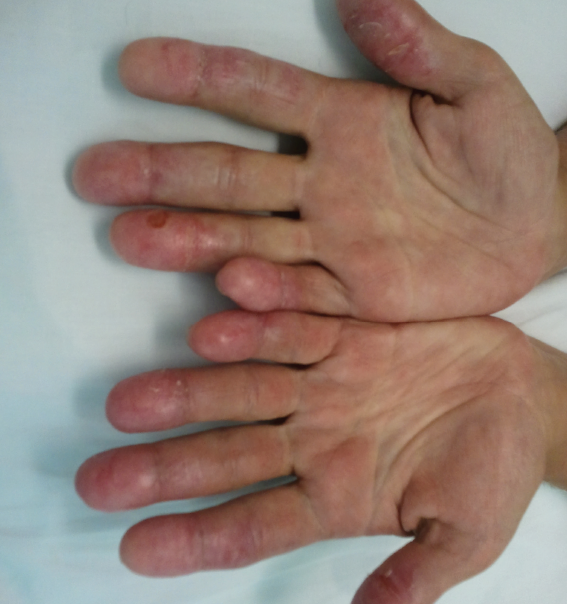 Figure 4. Erythematous patches with scaling and fissuring of the distal palmar surface bilaterally.

The diagnosis of sporotrichosis in patients presenting with the classic lymphocutaneous form may not pose substantial difficulty, but in the presence of atypical features, it may be clinically difficult to distinguish from other diseases such as blastomycosis, histomycosis, and coccidioidomycosis. Other systemic diseases included in the differential diagnosis are lupus erythematous, tuberculosis, syphilis, leprosy, herpes simplex, furunculosis, catscratch disease, anthrax, tularemia, and cowpox.5 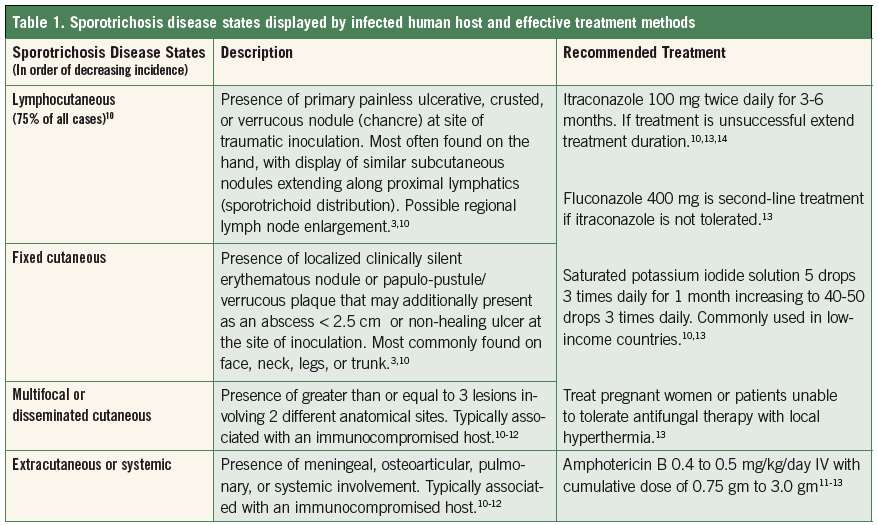 Accepted treatments of sporotrichosis vary around the world. In low-income countries, the condition is treated with potassium iodide. In developed countries, the standard of care for cutaneous and subcutaneous disease types is itraconazole.17

Itraconazole is 90% to 100% effective in the treatment of sporotrichosis. Side effects such as nausea, epigastric pain, hypercholesterolemia, and hypertriglyceridemia are common in patients treated with itraconazole.18 Additionally, amphotericin B, which is notorious for its side-effect profile, can be used to treat immunocompromised patients with extracutaneous or systemic disease involvement resistant to itraconazole. The side effects of treatment with amphotericin B remain a preferred alternative to life-threatening superinfection—such as the Staphylococcus or Streptococcus species seen in untreated sporotrichosis.17 Prolonged delay in the identification and treatment of sporotrichosis may cause appreciable scarring, pulmonary problems, meningitis, or even death.17,19 The Table describes therapeutic interventions for the various disease types.

The precise incidence of sporotrichosis is currently undetermined. In the United States, there is an estimated 200 to 250 occurrences per year or 1 to 2 cases per million in the population.20 Adult males typically contract the fungus more frequently than females due to increased exposure occupationally and recreationally. Human-to-human transmission of sporotrichosis is extremely rare, with only 1 reported case in the literature occurring between a mother and child after numerous exposures to the mother’s lesion.21

This article introduced the case of disseminated, multifocal cutaneous sporotrichosis in a 50-year-old female, who required hospital admittance to administer IV itraconazole to stabilize her infection. Eventual home management consisted of oral itraconazole and empirical bactrim, both 5 mg/kg daily for life. The patient presumably contracted sporotrichosis from rose gardening. The likelihood of transmission and dissemination may have been increased due to the patient’s immunosuppressed state, exhibited by her laboratory values and positive DHR test. In addition, the patient was taking quetiapine and gabapentin, with side-effect profiles including neutropenia, leucopenia, thrombocytopenia, and agraulocytosis, which may have also played a role in the patient’s immunosuppression.

Typically, a DHR positive patient would require genotyping to confirm the diagnosis of CGD. However, in this case, it was unnecessary due to the unique display of maternal X-linked chromosomal transmission to both sons conceived by separate fathers. Therefore, a diagnosis of CGD, X-linked variant was established.

Over time, female carriers of CGD can become phenotypically symptomatic, which would increase the likelihood of contracting recurrent bacterial skin infections.22 If sporotrichosis is left untreated, it can result in recurrent skin superinfection, ulceration, and necrosis. In patients with severe immunocompromise, complete eradication may never be possible.17

Therefore, it is important for individuals with increased susceptibility to infectious diseases to wear protective clothing when handling materials capable of transmitting S schenckii—ie, rose bushes, sphagnum moss, hay, or pine seedlings. An increased level of clinical suspicion for sporotrichosis will help in preventing inaccurate or delayed diagnosis as well as reducing unnecessary antibiotic use, ultimately resulting in appropriate and cost-effective care for the patient. ■

Interested in dermatological disorders? Visit www.consultant360.com and check out our Medical Resource Center for images, case reports, and features on other skin conditions.

Natasha Joshi, DO, PGY4, is a pulmonary and critical care fellow at McLaren Oakland Hospital in Pontiac, MI.

Franklin J. Rosenblat, DO, is a board certified infectious disease physician in Bloomfield Hills, MI with over 24 years of experience.

Annette LaCasse, DO, is the director of the Botsford Hospital dermatology residency program, and is a board certified dermatologist practicing in Commerce, MI with over 30 years of experience.