The boy had emigrated from Vietnam at the age of 11. His mother had received a BCG vaccine as a child, had a positive purified protein derivative (PPD) test but clear chest radiograph at time of immigration, and had subsequent chest radiographs that were unremarkable. The patient similarly had BCG vaccination as a young child in Vietnam and an unclear PPD history, but a subsequent normal chest radiograph in the year prior to his presentation in the ED (Figure 1). He had no recent travel or contact with sick individuals, and his family denied any knowledge of family members being treated for tuberculosis (TB). The boy denied fevers, night sweats, or weight loss but likely had an intermittent productive cough, worse at night for at least 3 months.

On physical examination, he was febrile with a temperature of 38.5°C, heart rate of 133 beats/min, respiratory rate of 16 breaths/min, and blood pressure of 106/61 mm Hg. Physical examination results were also significant for diaphoresis. There were no signs of increased work of breathing or adventitious left lung sounds, but there were diminished right-sided breath sounds with diffuse rales throughout the inferior 2/3 right lung fields. Heart sounds were normal. Results of a skin examination were significant for 2 midline café-au-lait spots. There was mild thoracolumbar kyphosis but no spinal tenderness. The remainder of the examination results were unremarkable.

Laboratory results were significant for mild anemia (hemoglobin 11.8 g/dL, hematocrit 36.1%, mean corpuscular volume 78.6 fL, and red cell distribution width 16.0%), but otherwise normal peripheral white blood cell count (12.2 × 109 cells/L with 82% neutrophils, 7% lymphocytes, 11% monocytes, and 1% eosinophils) and platelets (479,000 µL). A complete metabolic panel including liver function, thyroid, and venous blood gas indicated that results were within reference range, except for a sodium level of 131 mEq/L. Because of the findings on the chest radiograph (Figure 1), 2 g of ceftriaxone was administered and the patient was admitted to the inpatient unit awaiting results of a computed tomography (CT) scan of the chest (Figure 2). An infectious disease specialist suggested treatment with piperacillin/tazobactam. The patient subsequently admitted to ongoing night sweats for 3 months.

Ultimately, acid-fast bacillus stains on 3 sputum samples were positive. The T-Spot test was positive and Mycobacterium tuberculosis grew from sputum culture. The patient was treated with RIPE therapy protocol for active tuberculosis cavitary disease, which is 2 months of rifampin, isoniazid, pyrazinamide, and ethambutol, with supplemental vitamin B6 for potential isoniazid toxic effects. He was then switched to 10 months of rifampin plus isoniazid, and vitamin B6. The boy demonstrated dramatic improvement in exercise tolerance by 1 month. 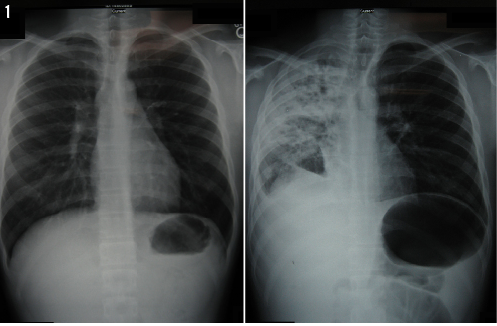 The patient presented with classic signs of activation of latent TB with progressive, multifocal pulmonary involvement that seemed worse than his clinical presentation. TB should be considered in all eastern Asian immigrants, and its latency in clinical appearance is well described. Additionally, one should also consider melioidosis, as it presents similarly to TB and is endemic to eastern Asia. Melioidosis, caused by the gram-negative bacteria Burkholderia pseudomallei, is found in soil and fresh surface water, and can insidiously present as an active infection after years of latency. It can be treated with pipericillin/tazobactam. However, most cases of melioidosis are subclinical, and if the clinical presentation is activation of latent TB, follow-up positive studies are typically quickly ascertained, as in this case.

TB is an airborne infectious disease caused by M tuberculosis. Although the worldwide incidence of TB has slowly been decreasing, the global disease burden remains substantial. In 2013, an estimated 9 million cases and 1.5 million deaths were reported.1

TB may present as an active or latent infection. In a latent infection, the body mounts a persistent immune response to mycobacterial infection but demonstrates minimal or no evidence of an active infection. Conversion from latent TB to active TB presents with specific illness patterns, typically fever, prolonged cough, hemoptysis, night sweats, weight loss, and sputum production; it can also present with pleuritic chest pain, fatigue, pharyngitis, and arthralgia.2 A number of risk factors may hasten progression, including, but not limited to, recent contact with an infected individual, HIV infection, immunocompromised state (eg, dialysis or transplant patients), incarceration, illicit drug use, and homelessness.2 Clinicians should be suspicious of TB in any high-risk group, and the population of US patients who have emigrated from highly endemic TB areas must always be considered in this light.

Laboratory analysis for TB often begins with a tuberculin skin test (TST), a type IV hypersensitive reaction that tests for tuberculin, a protein produced by the bacillus. Patients who have received a BCG vaccine may test positive with a TST without other clinical evidence of infection. A positive TST result should be followed with a chest radiograph to investigate for pulmonary infiltration. Other tests may prove beneficial, such as a sputum culture or interferon-γ release assays (IGRAs). IGRAs are especially useful in patients with a history of BCG vaccine. Currently, 2 IGRAs are approved by the US Food and Drug Administration: QuantiFERON-TB Gold In-Tube Test (QFT-GIT) and the T-SPOT TB Test (T-Spot).3

Essentially, these tests measure the immune response (interferon-γ) to TB antigen, and IGRAs are unaffected by prior BCG vaccination, thus serving as a good measure of latent TB infection. IGRAs are not used to actually diagnose active infection; positive acid-fast bacillus staining, and ultimately culture results of sputum or other body fluids (ie, gastric or bronchial washings) are diagnostic.

While the overall cases of TB remain on the decline since 1992, the Centers for Disease Control and Prevention reported 555 deaths from TB in the United States in 2013, the most recent year for which data are available. This represents an 8% increase from the 510 TB deaths in 2012. Furthermore, foreign-born persons have a case rate approximately 13 times higher than US-born patients.4

With a rising immigrant population in major cities across the country, early detection and adequate knowledge of varying laboratory techniques in identifying both latent and active TB can influence mortality and morbidity from the disease. The current recommendation in the United States by many infectious disease experts is that all persons with a positive TST, irrespective of BCG vaccine and/or clear chest imaging, be further tested with IGRAs to ensure that there is not latent TB.5 However, this is not the standard in many US state health departments, and individuals similar to the case presented above are enrolled in the US public school system and live in general communities.

Physicians need to be aware that many of the countries of origin of these high-risk groups similarly do not treat a positive TST if history of BCG is known. In addition, patients already in the United States for several years may give negative answers to questions about family TB history and exposures in the routine review of systems, similar to our patient case. The importance of accurate charting in the medical record of prior test results, especially on arrival to the United States, cannot be overemphasized. Latent TB should always be considered in immigrant children and be investigated and treated as indicated.

Jeffrey M. Chinsky, MD, PhD, is with the Department of Pediatrics at Johns Hopkins University School of Medicine in Baltimore, Maryland.