A previously healthy, HIV-negative, fully immunized 18-year-old young adult presented with a 3-day history of pain in his right shoulder and upper chest, which had progressed after 24 hours to swelling and pain in the left knee and leg. He also had an associated fever of 38.9°C of 2 days’ duration.

A large conventional tattoo had been placed on the teenager’s upper chest 2 weeks prior to the onset of illness. The tattoo had healed appropriately within a week of application.

Figure 1. Swelling and tenderness were noted over the right sternoclavicular joint 2 weeks after the application of a tattoo at the site.

Physical examination revealed a well-built, febrile, sick-looking young adult in significant distress as a result of severe pain in his upper chest and left leg. He had a temperature of 40.0°C, a heart rate of 106 beats/min, and blood pressure of 131/86 mm Hg.

Swelling and tenderness were noted over the right sternoclavicular joint (Figure 1). He had decreased range of motion (ROM) in the right shoulder. Also noted were swelling and erythema with warmth and tenderness of the left knee, extending to the calf (Figure 2), which was associated with decreased ROM in the left knee. The neurovascular bundle in the left foot was intact. The tattooed skin of the adolescent’s upper chest looked normal. 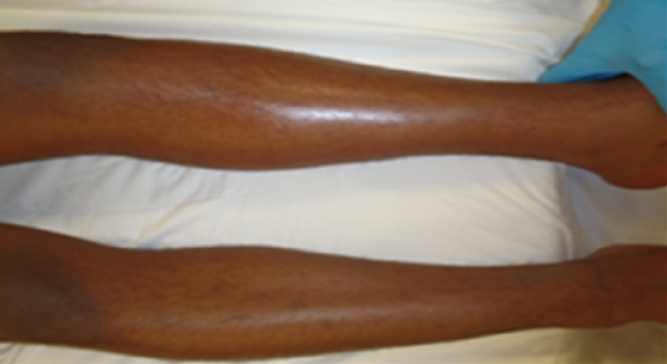 Figure 2. Swelling with erythema, warmth, and tenderness of the left knee, extending to the calf, were noted on physical examination.

Imaging studies. Results of chest radiography and Doppler ultrasonography of the left lower extremity and the right upper extremity were normal. A computed tomography scan with contrast showed intramuscular swelling in the left calf with complex, multiloculated, intermuscular fluid collections and intact fascial planes (Figure 3). Magnetic resonance imaging showed focal marrow edema on either side of the right sternoclavicular joint space and moderate joint effusion with intra-articular debris in the left knee.

Joint aspiration. Arthocentesis of the left knee, performed after 2 doses of ceftriaxone, yielded 40 mL of serosanguineous fluid that had a WBC count of 8.4 × 109/L with 91% neutrophils. Surgical drainage of the left calf revealed multiple pockets of pus with foul-smelling sanguinopurulent fluid. He was treated empirically with intravenous vancomycin, ceftriaxone, and clindamycin.

Synovial fluid culture and all wound cultures were negative, but blood culture grew a pansensitive, nontypeable Haemophilus influenzae strain of biotype I. The antibiotic treatment regimen was changed to intravenous cefuroxime. Wound packing was removed 4 days later. The fever resolved and symptoms improved after the first 2 hospital days.

The patient was discharged on day 5 with instructions to complete 4 weeks of treatment with oral cefpodoxime.

At a follow-up visit 1 week later, the patient was ambulating, pain-free, and had healthy granulation tissue of the left calf wound. 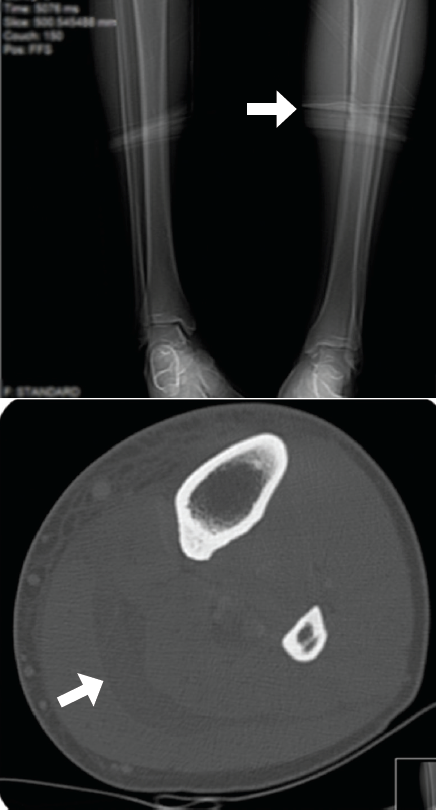 Figure 3. Computed tomography with contrast of the left leg showed complex, multiloculated, intermuscular fluid collections and some intramuscular swelling in the left calf.

Tattoos and complications. Tattooing has been practiced for thousands of years and has even been noted in several Egyptian mummies.1 Today, 10% to 16% of U.S. adolescents have permanent tattoos, and one-third to one-half of them have one or more piercings other than of the earlobe.2

In the preantibiotic era, bacterial complications of tattooing sometimes were severe or even fatal.3

Today, sepsis after tattooing is extremely rare. It most often is reported after Polynesian or other tribal tattooing with the use of nonconventional needles.4 The causative organisms in these few reports were Pseudomonas aeruginosa, Staphylococcus aureus, and Streptococcus pyogenes.5 To the best of our knowledge, our patient is the first reported case of H influenzae as a cause of sepsis after tattooing.

Influenzal bacteremia. Before the introduction of the flu vaccine, H influenzae serotype b (Hib) was the leading cause of bacterial meningitis and other life-threatening invasive bacterial diseases among children younger than 5 years of age in the United States.

H influenzae bacteremia most frequently occurs in individuals with an underlying predisposing condition such as HIV infection, diabetes mellitus, cancer, or immunodeficiency.9 Our patient had neither an underlying condition nor a local infection immediately after having received a tattoo.

It is likely that the primary H influenzae replication site in our patient was a local microthrombus that was not identified with the use of Doppler ultrasonography. This would explain the multifocal distal septic emboli. The initial decision to administer empiric broad-spectrum antibiotics proved a prudent one; indeed, the patient eventually received a diagnosis of invasive H influenzae infection, which is very rare among young, healthy individuals.

Catalina Marino, MD, is a pediatrician at Lincoln Medical and Mental Health Center.

Shefali Khanna, MD, is chief of the Department of Pediatrics at Lincoln Medical and Mental Health Center.