Providing Medical Care by Email: Management of a Child’s Rash 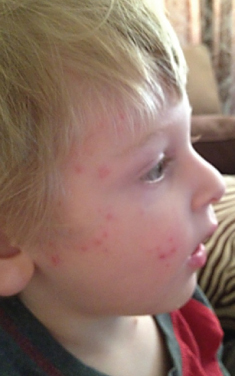 The mother of a 3-year-old boy with a rash that had developed over the past 24 hours sent an email with photo of the child (shown here) to our office for evaluation. The mother described the rash as small, mildly pruritic “bumps” on the sides of the face, upper arms, and legs. The previous week, the boy had a diarrheal illness with low-grade fever (temperature, 38.3°C [101°F]) that had resolved. No rash had been present during the illness. There had been no cough or emesis. The family lived over an hour away from the office and the mother was hoping not to have to bring her child in for a visit.

Based on the clinical history and photo of the rash, a tentative diagnosis of Gianotti-Crosti syndrome (GCS) was made. This childhood acrodermatitis is characterized by symmetrical, discrete, monomorphous, flat-topped, flesh-colored papules on the face, buttocks, and extensor surfaces of the extremities.1,2 The papules are typically 1 to 5 mm (rarely, up to 10 mm) and are occasionally hemorrhagic or vesicular.3 GCS usually occurs in young children1; in one series, more than 90% of patients were younger than 4 years.2 Cases sometimes occur in older children and adults.

A prodrome of upper respiratory tract infection, cough, fever, diarrhea, and/or lymphadenopathy is common before GCS. The rash generally resolves within 10 to 60 days, but in atypical cases can take up to 12 months to clear.3 The syndrome was originally associated with hepatitis B virus but has more recently been associated with many other viruses, bacteria, and even immunizations.

The mother was advised that the rash was probably associated with a viral infection and self-limited. No treatment was prescribed. Three days after the email consultation, the boy was brought to the office along with his sibling who was scheduled for a well-child check-up. At that time, he appeared well and the rash had begun to resolve.

This case illustrates the use of modern technology to provide medical care to a child who is not seen in the office. Most pediatric practices provide telephone diagnosis and advice during usual office hours, and many provide this after hours, often with the help of a nurse-triage telephone answering service. Many general and specialist pediatricians receive email messages, some with images (as in this case), from patients and parents and reply or communicate advice and results of laboratory tests or imaging via email.4

From the parents’ perspective, diagnosis and advice without an in-person visit offers 2 main advantages. It saves time and money—in the form of lost work, transportation to and from the pediatrician’s office, and insurance co-pays. A disadvantage is that the diagnosis may be less accurate, which could result in inappropriate treatment.

From the pediatrician’s perspective, providing care without an office visit may save time and allow the most appropriate triage of patients to the office or an emergency department (ED). However, the lack of visual clues is a major disadvantage of this practice. Parents may use words such as “lethargic” and “irritable” to describe a sick child over the telephone, but the same child seen in the office may appear relatively healthy. If a patient contact occurs outside the office setting, limited or no access to the child’s medical record can be another problem. At the present time, it may be difficult or impossible to bill for such work. These unpaid encounters can take time away from reimbursable work or the pediatrician’s personal time, and he or she must also assume legal liability for a bad clinical outcome.

With the advent of new technologies, some of these problems can potentially be overcome. One example is the Health-e-Access program at the University of Rochester Medical Center’s Golisano Children’s Hospital, which allows pediatricians to perform remote evaluations of ill children at child-care centers and schools. With the help of a telemedicine assistant, digital medical instruments, and high-quality videoconferencing, providers can conduct “virtual” office visits which can include looking at tympanic membranes as well as listening to heart murmurs and lung sounds. This program has been well-received by parents who can remain at work and by employers of these parents. Its implementation has been associated with a significant decrease in ED visits.5