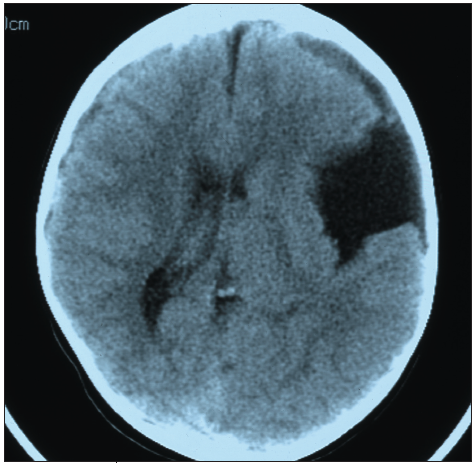 The parents of a 7-year-old girl, who had fallen off her bicycle and hit her left forehead 2 weeks earlier, brought their daughter to the emergency department after she began having increasingly severe headaches. She had been healthy before her fall and had no history of other trauma or meningitis. She had no neurologic deficits on presentation. Examination of the fundus revealed no papilledema.

A CT scan of the head showed a large uniform fluid cyst with smooth margins and nonenhancing walls outside the left temporal lobe. The cyst extended superiorly into the sylvian fissure and produced a mass effect with displacement of the midline structures to the right.

Robert P. Blereau, MD, and Timothy J. Haley, MD, of Morgan City, La, diagnosed arachnoid cyst. This lesion may be a congenital anomaly--as was suspected in this patient--or a result of an infection or trauma. The cyst was not considered a result of the head trauma from the patient's fall off the bike, because there was no bleeding within the cyst. Rather, it was thought that the head trauma caused either rupture of the cyst or bleeding into the cyst. In fetal development, if the mesenchymal syncytium breakdown in response to cerebrospinal fluid accumulation is incomplete, then loculation or cyst formation within an arachnoidal layer may occur. Small cysts are usually asymptomatic and found incidentally; large cysts may cause symptoms, such as headache.

The differential diagnosis includes porencephalic cysts, which may be difficult to differentiate from arachnoid cysts on CT. Porencephalic cavities lie within the brain parenchyma, are more irregular, and often communicate with the adjacent ventricle and with abnormalities of the brain and ventricular system.

This patient was initially referred to a tertiary care hospital for neurosurgical consultation; treatment with an oral corticosteroid was started, and the headache was relieved. However, when the treatment was discontinued, the headache returned with such severity that she could only lay in bed with the pain. A shunt operation provided complete relief of her headache. She had no deficits before or after surgery.