An otherwise healthy 18-year-old man developed progressive right upper extremity (RUE) pain, mild swelling, and ecchymosis 1 day after throwing 96 pitches at baseball practice. He had been diagnosed as having an acute RUE deep vein thrombosis (DVT) after undergoing ultrasonography at an outside hospital, and he was started on rivaroxaban. He was referred to our hospital for further management of the upper extremity DVT. He described the RUE pain, swelling, and ecchymosis as improved, but persistent while on rivaroxaban. He denied any chest pain or pressure, shortness of breath, or paresthesia or weakness of his extremities. He also denied any personal or family history of blood clots, hypercoagulable disorders, or malignancies.

At admission, 5 days after the inciting baseball practice session, his physical examination results were notable for RUE edema extending from the forearm to the axilla, and ecchymosis with tenderness to palpation over the right biceps. He had intact sensation and 5/5 strength in the RUE, 2+ radial and ulnar pulses, and normal capillary refill bilaterally.

Repeat RUE ultrasonography was ordered, and results were notable for a DVT extending from the brachial through axillary and subclavian veins, and a superficial thrombus in the right basilic vein (Figure 1). At this time, he was diagnosed as having Paget-Schroetter syndrome, the rivaroxaban was stopped, and he was bridged with a heparin drip pending possible intraoperative intervention by the vascular surgeon.

Preoperative venogram showed complete occlusion of the right proximal basilic, axillary, and subclavian vein (Figure 2). Over the course of 3 days, he underwent several treatments with mechanical thrombectomy, catheter-directed thrombolytic therapy, and balloon angioplasty. Postoperative venogram showed improved blood flow from the right subclavian to brachial vein. During the venogram, a provocative test for thoracic outlet syndrome was performed, and it yielded a positive result. The patient was discharged on rivaroxaban for anticoagulation for a 3-month period. 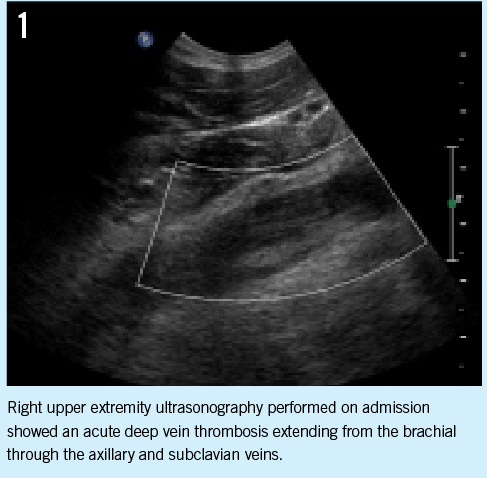 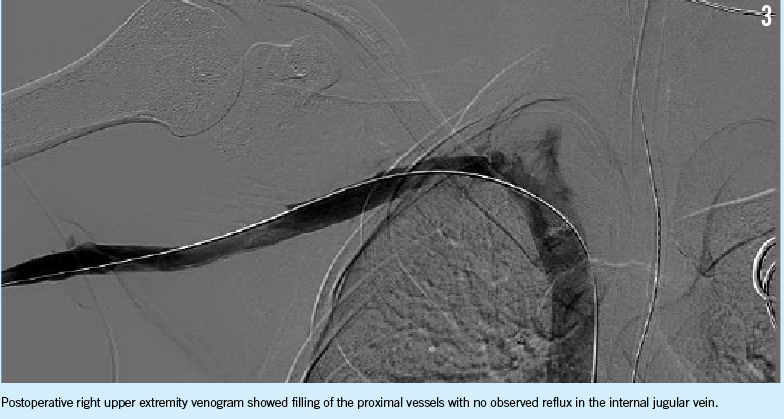 Paget-Schroetter syndrome is a rare cause of primary upper extremity DVT primarily affecting young healthy individuals engaged in repetitive activities that involve hyperabduction and external rotation of the shoulder. There are about 2 cases of Paget-Schroetter syndrome per 100,000 persons each year.1 Unlike management of lower extremity and secondary upper extremity DVT, anticoagulation alone leads to suboptimal outcomes, with a high risk of symptom persistence or recurrence in up to 60% of patients, thus necessitating a more aggressive approach.2

The pathogenesis of Paget-Schroetter syndrome is thought to be due to chronic compression of the subclavian vein, resulting in inflammation and subsequent fibrosis of the surrounding area. This is consistent with intraoperative observations of dense collagen scar tissue replacing the normal connective tissue around the subclavian vein in affected individuals.3 Hence, the vein becomes less mobile, and it is at an increased risk for further injury as it transverses the costoclavicular space. The preferred initial diagnostic test is a duplex ultrasonography (78% to 100% sensitivity, 82% to 100% specificity),1 although the gold standard remains contrast venography.4

The management of Paget-Schroetter syndrome has significantly changed over the last half century, with recommendations of exclusive anticoagulation and limb elevation prior to 1980.1,2,5 However, such conservative therapy resulted in more than half of patients having persistent or recurrent symptoms2 and 6% to 15% developing acute pulmonary embolism.1 Delayed treatment also yields poor outcomes, with thrombolytic agents becoming significantly less effective in completely removing the clot after about 6 weeks.1 For optimal clinical outcomes in these patients, there needs to be a multimodal approach of intravenous catheter-directed thrombolysis followed by anticoagulation, and subsequent surgical decompression if thoracic outlet syndrome is present.1,3

Follow-up ultrasonography 3 weeks later showed a chronic right subclavian DVT. After another week, he underwent an elective right first rib resection to decompress the thoracic outlet, with subsequent circumferential external venolysis of the proximal portion of the subclavian vein. Postoperative venogram showed the presence of a web in the right subclavian vein, so balloon angioplasty of the right subclavian and axillary vein was performed, yielding improved vein flow (Figure 3). He resumed anticoagulation therapy with rivaroxaban postoperatively.

Twelve weeks after the rib resection, the patient was feeling and doing well. Physical examination results were unremarkable and showed no signs of recurrent DVT or major bleeding. Repeat ultrasonography showed interval resolution of the previously seen right subclavian DVT with no acute DVT visualized in the bilateral upper extremities.

Rivaroxaban was stopped as the patient had completed 3.5 months of therapy at this time. He was subsequently transitioned to daily dual antiplatelet therapy with 81 mg of aspirin and 75 mg of clopidogrel due to the risk of recurrent venous thrombosis in the setting of his recent surgical procedures. The duration of the medications is to be determined based on regular evaluations by the vascular surgery team.

This case illustrates the importance of prompt and aggressive treatment for primary upper extremity DVT to ensure optimal vein patency and to reduce the risk of morbidity related to recurrent thromboembolism and postthrombotic syndrome.

Debbie W. Chen, MD, and Gretchen Diemer, MD, are from the Department of Internal Medicine at Thomas Jefferson University Hospital in Philadelphia, Pennsylvania.