A 28-year-old Caucasian male with past medical history significant for intravenous (IV) substance abuse presented to the emergency room complaining of a productive cough, chest pain, fever, chills, sweats, vomiting, and diarrhea for 4 days. He has a retrosternal chest pain that radiates to his back and worsens with inspiration and lying down. He also complains of diffuse muscle soreness, fatigue, shortness of breath, and chest tightness. He denied any history of travelling outside United States, prison time, or exposure to tuberculosis.

On physical examination, the patient had tachycardia with normal rhythm, normal S1, and fixed S2 split. There was decrease in breath sounds in right upper lesion and significant use of accessory muscles for breathing. There were 3 distinct lesions along the lining of a new 11 day old tattoo (Figure 1). One of which was approximately 2.5 cm by 2.5 cm in size with a scabbed head.

Troponin studies were negative for acute coronary syndrome. HIV and Hepatitis B tests were negative. Abscess on patient’s back was drained and sent for culture and Pulmonology was consulted for a diagnostic bronchoscopy and lavage which was not significant; sputum acid-fast bacilli (AFB) and blood culture with Gram stain and cytology were ordered to identify specific pathogen.

Figure 1. Tattoo on back with the distinct lesions (left); tattoo 1-month following treatment and resolution of symptoms (right).

Based on the presentation and results, patient was admitted to negative pressure room on airborne precautions and was empirically started on vancomycin 2000 mg IV, ceftriaxone 1000 mg IV, and azithromycin 250 mg PO. He was also being given enoxaparin as part of the deep vein thrombosis (DVT) prophylaxis protocol. Sputum AFB culture returned negative for tuberculosis. HIV, as well as hepatitis B and C tests were negative.

On day 3 of hospitalization, the culture from the abscess on the back grew MRSA. However, the patient continued to record fever spikes as high as 103.1°F and he complained of severe chest pain uncontrolled with the use of morphine. D-dimer was elevated at 853 ng/mL, which prompted a CT angiography to rule out pulmonary embolism. This showed multiple consolidated infiltrates with necrotic masses along the right mediastinum. Figure 2 shows the progressive worsening of pulmonary necrosis as compared to the original CT scan. The following day, the patient’s blood and sputum cultures came back positive for MRSA sensitive to vancomycin and linezolid. Thus, ceftriaxone and azithromycin were discontinued and, due to the high post-test probability of mediastinitis, the patient was transferred to a tertiary care center. An echocardiogram was negative for an valvulvar vegetations.

The patient was continued on vancomycin and started reporting stable vital signs on day 9. He was discharged on day 12 with no residual symptoms and a stable total WBC count around 12 K/ul. He was prescribed a 24-day course of oral linezolid and was followed by an infectious disease physician as an outpatient with regular bloodwork.

MRSA is a well-known cause of healthcare-associated infection.1 However, MRSA infections have been reported in previously healthy individuals with no recent history of healthcare contact.1,2 MRSA has emerged as an important cause of community-acquired infections, which has been recently designated as community-associated (CA)-MRSA.3 CA-MRSA infections previously tended to arise largely from specific patient groups—especially in high-risk settings, such as military recruits, sports teams, and individuals living in close communities or involved in activities resulting in skin abrasions.4 However, recent CA-MRSA infections have arisen in otherwise healthy individuals who did not have such risk factors. Young age of patients has been a remarkable feature of CA-MRSA pneumonia in both European and US cases.4-7

However, in our case, a negative echocardiogram for valvulvar vegetation prompted us to search for less common causes of MRSA necrotizing pneumonia. With the primary source of infection most likely being the skin abscess on the  upper back, we postulated the most likely pathophysiology that lead to the patient’s condition (Table). Our patient had 2 risk factors for MRSA colonization—a history of IV drug abuse and a sister with history of multiple MRSA abscesses.

The tattoo needle introduced MRSA to the blood and also caused venous endothelial damage. The endothelial damage initiated coagulation cascade, leading to a thrombus formation where the fibrin is admixed with pathogen and this site is further seeded with pathogen resulting in local septic thrombophlebitis.9 This was the source of septic emboli, which implanted in the vascular system of lungs leading to necrotizing pneumonia.

The patient was initially started on prophylactic anticoagulation therapy for DVT, but the role of anticoagulation in septic thrombophlebitis is controversial due to the argument that it can reduce mortality and risk of further pulmonary emboli by preventing thrombus formation versus concern that it may potentially increase rates of septic embolism.10 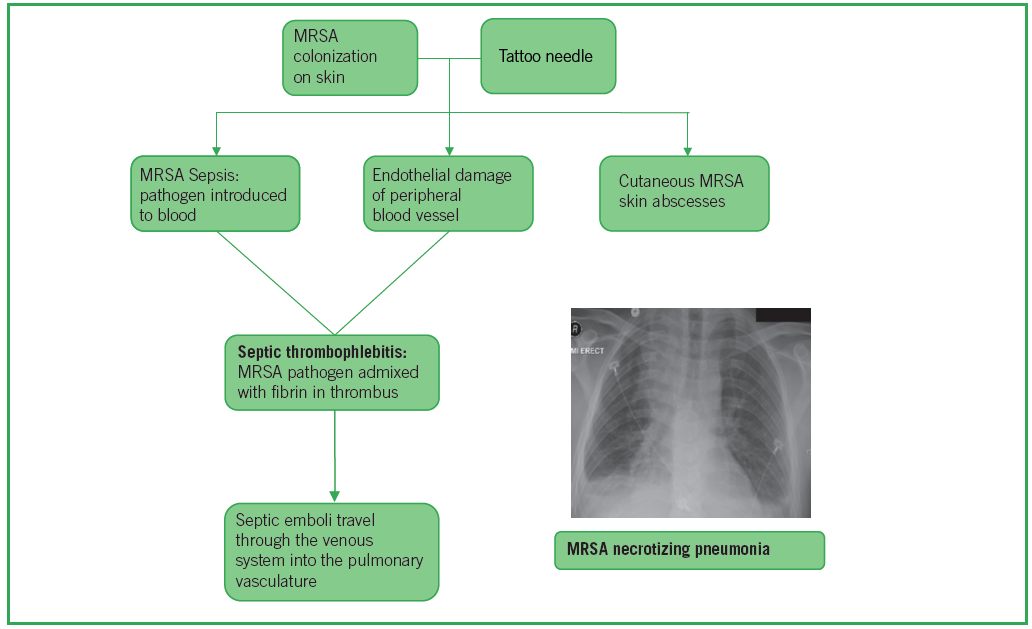 In our patient, the diagnosis of peripheral septic thrombophlebitis as a result of the recent tattoo leading to necrotizing pneumonia was suspected based on triple positive cultures of MRSA in blood, sputum, and cutaneous abscess, positive radiological findings, high D-dimer, and a negative echocardiogram. MRSA thrombophlebitis typically does not respond to appropriate antibiotic therapy within the first 72 hours, which explains why the patient showed no improvements during the first 4 days of hospitalization. The anticoagulation therapy may have been more detrimental than beneficial due to the fact that the CT on day 4 showed multiple new necrotic lesions in the lung.

MRSA necrotizing pneumonia and septic thrombophlebitis may not be commonly seen infections, but they have a high mortality rate. Early recognition and appropriate antibiotic therapy is the key to favorable outcomes. The role of anticoagulation therapy remains controversial and clinical trials are needed to make definitive recommendations.  ■

Taral R. Sharma MD, MBA, is a staff psychiatrist at the South Carolina Department of Mental Health and a clinical assistant professor at the University of South Carolina School of Medicine Greenville and Edward Via College of Osteopathic Medicine–Carolina campus.