Department of Internal Medicine, The University of Texas Medical Branch at Galveston, TX

A 19-year-old Hispanic male presented with a 3-month history of productive cough, hemoptysis, and intermittent pleuritic chest pain. He also reported nontender lumps on his posterior neck bilaterally that gradually increased in size. There were no associated fevers, chills, night sweats, weight loss, or any other symptoms. He denied tobacco, alcohol, or IV drug use.

History. He had a history of exposure to tuberculosis (TB); his mother was diagnosed with pulmonary TB in 2001 and received treatment, however the patient himself was not treated.

Physical examination. On physical exam, he was afebrile with a blood pressure of 114/74 mm Hg, pulse of 100 beats per minute, respiratory rate of 20 breaths per minute, and oxygen saturation of 97% on room air. 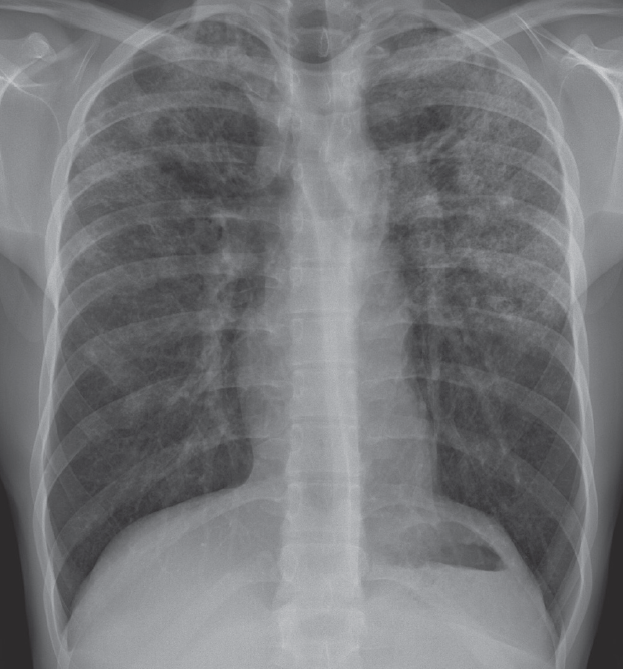 Figure 1. Patchy reticulonodular and airspace opacities are visualized along the lung apices with suggestion of a rounded lucency measuring approximately 1.2 cm on the right, which is highly suspicious for active postprimary tuberculosis.

Discussion. TB is one of the deadliest disease worldwide and accounts for the leading cause of death in HIV-infected individuals.1 In 2012, a total of 9951 TB cases were reported in the United States.1 Nationwide, there has been a decline in the incidence of TB, at a rate of 2.2% since the resurgence in 1992.1 The TB mortality rate has declined by 41% since 1990 and the world is on target to achieve the global target of a 50% reduction by 2015.1 Despite this progress, the global burden of TB remains enormous. In 2011, there were an estimated 8.7 million new cases of TB and 1.4 million people died from TB.1

Miliary TB (MTB) results from lymphohematogenous spread of Mycobacterium TB and accounts for approximately 1% to 2% of all cases of TB and about 8% of all forms of extrapulmonary TB.1 MTB has a 100% mortality rate if untreated, stressing the importance of a timely diagnosis.2

MTB typically affects children <3 years of age or patients with other risk factors including HIV, diabetes, end stage renal disease (ESRD), or immunosuppression; however, it is not necessary for an underlying medical condition to be present.3,4 MTB can be the result of a primary infection or the reactivation of a latent infection. MTB can have acute, subacute, or chronic presentation. Acute presentation is marked with rapid progression of the disease leading to sepsis, acute respiratory distress syndrome (ARDS), and organ failure. The subacute and the chronic presentation are more common characterized by gradual fevers, malaise, and weight loss.4 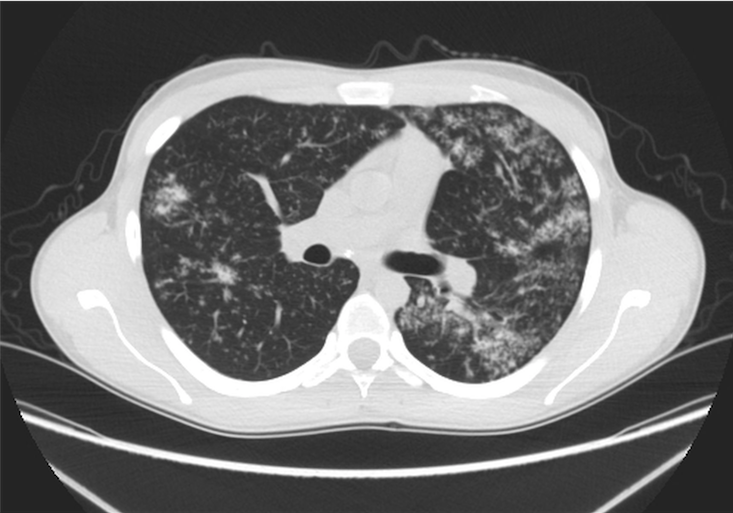 Figure 2. CT scan of the chest without contrast showed multiple cavities and military distribution of micronodules with upper lobe predominance. Areas of scarring with calcification and traction bronchiectasis were identified in the left upper lobe. These findings are consistent with active postprimary tuberculosis military spread with cavitary formation.

Diagnosis of MTB is based on clinical presentation, radiographic imaging, and microbiological and histopathological evaluation, as seen in this case. A miliary pattern on chest imaging is the hallmark of MTB; however, it may not be present in all cases, which makes the diagnosis extremely challenging.5,6 On chest x-ray, miliary infiltrate was only seen in patients with MTB (28.1% vs 0.0%, P=0.01).7

Physical exam may reveal hepatosplenomegaly, lymphadenopathy (typically cervical), and choroidal tubercles on fundoscopy.6 Patients with MTB must be treated with standard anti-tuberculosis treatement.4,8 The standard treatment regimen recommended by the World Health Organization9 and Infectious Disease Society of America10 for non-resistant MTB consists of 6 months of anti-TB medications: 2-month therapy with rifampin, isoniazid, ethambutol, and pyrazinamide, followed by 4 more months of isoniazid and rifampin alone. Length of treatment for MTB has not been widely studied, therefore an intensive 6-month treatment, as in pulmonary TB, is the advised treatment regimen.

Typically MTB is thought be more prevalent in patients with HIV, but physicians should have low threshold of suspicion in patients presenting with clinical symptoms suggestive of TB regardless of other comorbidities. TB is an emerging problem and a fatal disease; keeping high index of suspicion for the disease by healthcare professionals will help in reducing the global burden of the disease. ■