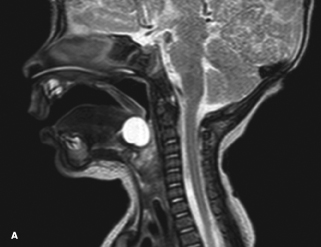 A 40-day-old baby was brought to the emergency department (ED) in respiratory distress. He had been evaluated in the ED 3 days earlier for fast breathing, retractions, and perioral cyanosis. Since birth, he had had 7 similar episodes lasting 4 to 5 minutes. Oxygen saturation levels were normal at this visit. He was discharged with a diagnosis of “periodic breathing.”

On return to the ED, the infant was reported to have decreased oral intake and episodes of air hunger, coughing, gagging, and worsening perioral cyanosis. The patient appeared ill and had increased work of breathing and hypoxia despite supplemental oxygen administration. He ultimately required intubation. During intubation, normal anatomic landmarks were obscured and an airway mass was visualized. An MRI scan confirmed the presence of a cystic mass at the base of the tongue (A). Otolaryngology was consulted for excision (B). 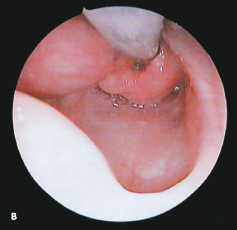 Thyroglossal duct cysts (TDCs) are the most common congenital cyst of the neck. They develop along the line of descent of the thyroid gland anywhere from the base of the tongue to the sternal notch; 1.2% of TDCs occur at the base of the tongue.1 They are found in the midline and usually move cranially when the patient swallows or protrudes the tongue.

In this infant, periodic airway compromise was the initial sign of the TDC. Lingual TDCs frequently cause respiratory symptoms and feeding difficulties in the first 6 months of life. The most common signs and symptoms of lingual TDCs in young infants are secondary to upper airway obstruction and include intermittent or continuous stridor, “raspy” respirations, accessory muscle retractions, and dyspnea.2 TDCs may be the cause of partial airway obstruction in infants.2,3