A healthy, 5-month-old girl presented with a 3-day history of bilateral leg pain and associated crying, particularly when her parents held her legs during diaper changes. Her parents were unable to localize the girl’s pain to a specific area. They reported that she would appear calm while lying on her back but would become fussy when she was forced to sit up or was moved.

The parents denied recent fever, trauma, cold symptoms, skin infections, swelling, or redness in the girl. She had received a diagnosis of respiratory syncytial virus 2 months ago and had had concurrent jaw swelling and fever that was thought to be related to viral parotitis. Those symptoms had resolved over the following weeks.

Physical examination findings were notable for tenderness with palpation of the long bones of both legs. Her joints and skin appeared normal. The results of the initial workup included a white blood count of 25,600/µL (35% neutrophils, 52% lymphocytes), a platelet count of 934 × 103/µL, and a C-reactive protein level of 36 mg/L. The lactate dehydrogenase level was normal.

Radiographs of the tibiae, fibulae, femurs, and pelvis were normal. She was admitted for presumed multifocal osteomyelitis and was started on clindamycin. Magnetic resonance imaging (MRI) of her legs showed nonspecific myositis and normal bone appearance. Days later, she developed bilateral forearm tenderness and mild swelling of her legs, with normal joint movement.

Another MRI (Figure) showed new periostitis along the shafts of the bilateral tibiae, fibulae, radii, and ulnae (arrows) that was consistent with infantile cortical hyperostosis (ICH), also known as Caffey disease. 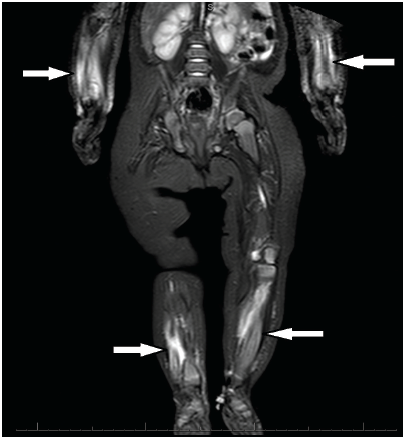 ICH is a rare genetic disorder typically characterized by irritability; soft tissue swelling of the mandible, clavicle, or limbs; and pain due to cortical thickening of the affected bone.1 Fever also may be present.

The average onset is at 9 weeks of age, and most cases resolve within 1 year, but it can recur up to several years later in rare cases.2,3 Although most cases resolve without sequelae, the focal fusion of 2 parallel bones has been reported.2 Some patients with ICH have a mutation of the collagen, type I, alpha 1 gene (COL1A1).3 Nonsteroidal anti-inflammatory drugs are the treatment of choice.4

This patient was started on daily naproxen and now is asymptomatic. The girl’s previous case of “parotitis” likely was mandibular involvement of ICH, which occurs in approximately 70% of cases.2 Physicians and dentists should consider ICH in infants with mandibular swelling.

Although infectious etiologies must be considered in toddlers with an acute onset of swelling, limb pain, elevated inflammatory markers, and fever, noninfectious etiologies such as ICH also should be considered. Because initial radiographs may appear normal, repeated images may reveal cortical thickening of affected bones. Recognizing this rare disease could prevent unnecessary antibiotics and repeated hospital visits, particularly in patients who fail to improve on antibiotic therapy.

3. Navarre P, Pehlivanov I, Morin B. Recurrence of infantile cortical hyperostosis: a case report and review of the literature. J Pediatr Orthop. 2013;33(2):e10-e17.