An Infant With Abdominal Distention, Pain, and Bloody Stools

A 10-week-old girl presented to the emergency department after having had several episodes of nonbloody, nonbilious emesis and irritability. On the night before presentation, she had refused to breastfeed, began vomiting, and was difficult to console. She had had 2 loose, nonbloody stools. The infant had been born prematurely via cesarean delivery at 35 weeks of gestation after the mother went into premature labor. The girl had had several meconium stools on her first day of life and had been discharged with her mother after a 3-day stay. She had no other medical problems and a negative family history for intestinal disorders. The mother denied recent travel, fever, respiratory symptoms, and rash.

On physical examination, the patient was alert and uncomfortable, with mottled skin. She cried immediately with light palpation of all quadrants of her abdomen. Bowel sounds were high-pitched and increased in frequency. Results of inguinal examination were unremarkable. The anus was patent, with normal tone and no lesions. A moderate amount of bright red blood mixed with soft stool was found in the rectal vault. The remaining physical findings were normal. 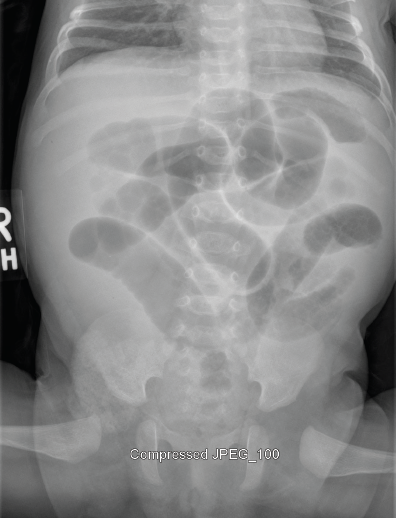 Results of a complete blood count and a comprehensive metabolic panel were normal. Supine and lateral abdominal radiographs (Figures) demonstrated markedly dilated loops of small bowel and air-fluid levels. There was no free air. Results of abdominal ultrasonography and barium enema were normal.

What is causing this infant’s symptoms?

A pediatric surgeon was consulted for suspected bowel obstruction. The surgeon took the patient to operating room for an emergent exploratory laparotomy. The girl was found to have a 1 × 3-cm Meckel diverticulum and obstructing adhesive bands. She underwent segmental bowel resection and anastomosis. Pathology test results confirmed the diagnosis of Meckel diverticulum and revealed a combination of ileal and gastric mucosa. The patient recovered uneventfully. 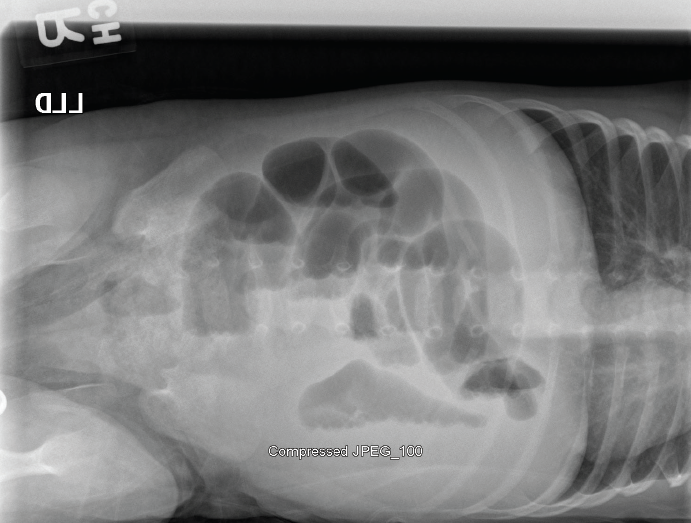 The prevalence is similar in boys and girls, yet complications occur more often in boys.1 In textbooks, it is reported to follow the “rule of 2’s”: 2% of the population, 2 feet from the ileocecal valve, 2 inches long, and 2 types of mucosa. In reality, however, there are many variations.1

Meckel diverticula can be symptomatic (16%) but more commonly are discovered incidentally in the operating room (84%).2 In symptomatic cases, rectal bleeding is a common presentation in adolescents and adults. Bleeding may be caused by acid secretion and ulceration of adjacent tissue, or by recurrent intussusception leading to inflammation and injury.1,5 At times, the bleeding can be massive and may lead to iron-deficiency anemia.

Other less common considerations are duplication, mesenteric cysts, and intestinal hematomas secondary to abuse.3 Necrotizing enterocolitis is a possibility, particularly in premature infants; symptoms typically present in the first few weeks.4 There are many causes of vomiting in infants, but bilious vomiting, localized or asymmetric tenderness, and abdominal distension are features that suggest a surgical condition.3 In our patient, the distension, the severity of pain, and the bloody stools, coupled with radiographs suggesting obstruction, were worrisome features.

A technetium-99m pertechnetate scan (Meckel scan) is the most accurate test for patients who do not require emergent surgery. In children, its sensitivity is between 80% and 90% and its specificity is 95%.1 The scan is less reliable in adults, perhaps because it detects gastric mucosa, which is more common in children with bleeding a Meckel diverticulum.2

The treatment approach for patients with a Meckel diverticulum depends on the presentation and presence of complications. Initial treatment is directed toward stabilization: fluid resuscitation, nasogastric decompression, and transfusion in cases of significant bleeding. For symptomatic patients, the treatment approach is always surgical resection via laparoscopy or laparotomy.

The results of recent studies have shown that the laparoscopic technique is safe and effective for definitive diagnosis and treatment, even in complicated cases.5,7 Diverticulectomy or segmental bowel resection with anastomosis are the two procedures indicated. The latter is favored in cases with palpable ectopic tissue, intestinal ischemia, or intestinal perforation. Conversion from laparoscopy to laparotomy may be necessary in complicated cases with small bowel obstruction requiring hemicolectomy or in cases of intussusception where pneumatic reduction is necessary.7

Prognosis generally is excellent. A recent series of 20 pediatric patients with complicated Meckel diverticula demonstrated that all had an uneventful recovery, except for one patient with a postoperative a wound infection.7 Cases of postoperative adhesions also have been reported.

Controversy surrounds whether to excise a Meckel diverticulum in an asymptomatic patient. Factors to consider are whether complications from surgery are greater than the lifetime complication risk from the diverticulum, which is estimated at 16%.1 For pediatric patients, nearly all studies favor prophylactic removal.1,2

Meckel diverticulum is the most common congenital anomaly of the intestinal tract, but most cases are asymptomatic. In young patients, obstruction is a common presentation.

In patients with an acute abdomen, an exploratory laparoscopy or laparotomy is necessary for diagnosis and treatment, whereas a technetium-99m pertechnetate scan usually is diagnostic for patients with rectal bleeding.

For nearly all pediatric patients, the treatment is surgical resection.

Drs Samaddar and Celleri are pediatricians at St. Joseph’s Hospital and Medical Center in Phoenix, Arizona.