A 44-year-old woman presented to the emergency department (ED) with a 1-day history of acute mental status changes, headache, neck pain, and fever. Her symptoms had progressed, with increasing confusion and decreased responsiveness. Emergency medical services reported that she had had 3 seizures en route and another lasting 1 minute upon arrival at the ED, at which point she was sedated and intubated.

Computed tomography (CT) scan of the head and lumbar puncture were performed in the ED, and empiric treatment was started for suspected meningitis. She was admitted to the intensive care unit (ICU) for stabilization and observation.

History and physical examination. The patient’s history was positive for genital herpes 25 years ago, for which she had received treatment and had not had subsequent recurrence. At presentation, she reported being sexually active and monogamous, with no use of contraception.

Results of the CT scan of the head were within normal limits for the patient’s age. Results of magnetic resonance imaging (MRI) scan of the brain (Figure) revealed edema in the medial left temporal lobe. 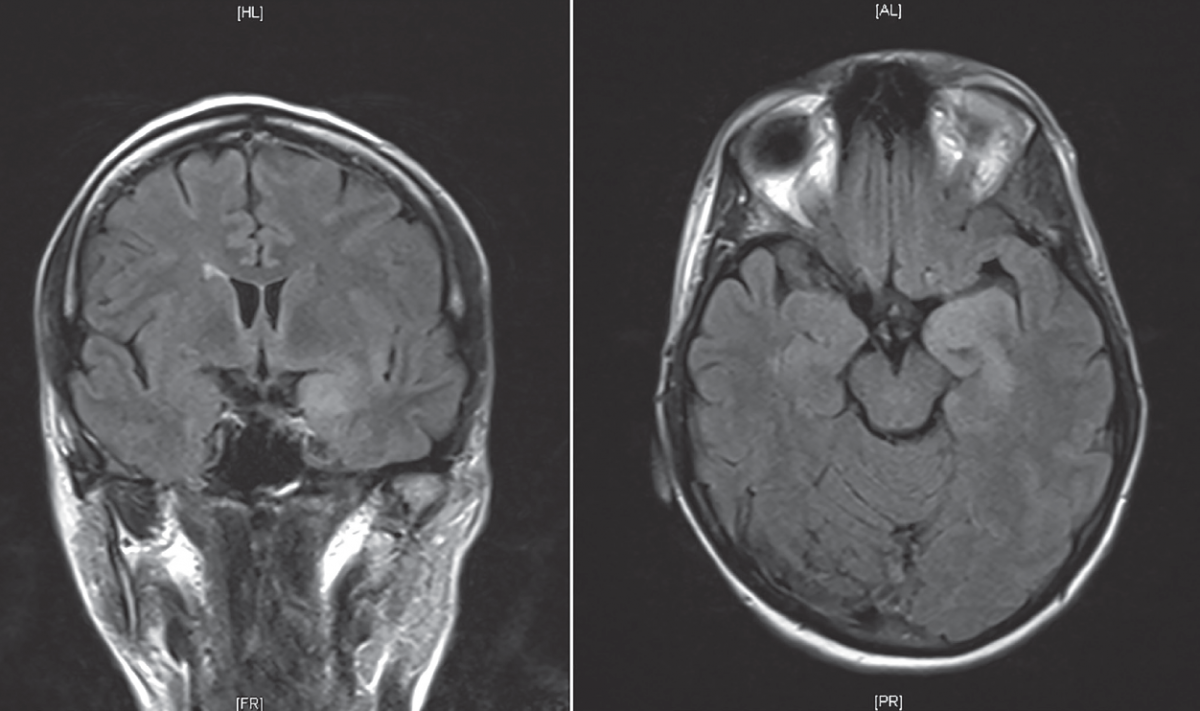 Outcome of the case. The patient’s ICU course was uncomplicated. Empiric treatment for meningitis was discontinued, and she was started on intravenous acyclovir, 700 mg every 8 hours. Her clinical picture improved by hospital day 5, and she was discharged on high-dose oral valacyclovir for a total overall treatment time of 3 weeks.

HSV can produce an array of findings in infected individuals. Perhaps the most frequent manifestation is fever, followed by headache, central nervous system (CNS) symptoms (eg, behavioral and personality alterations, diminished consciousness, cognitive decline, memory problems), seizures, and vomiting. Some of these manifestations may be traced to direct involvement of subcortical anatomy.3

On physical examination, findings most typically include alteration of consciousness, fever, ataxia, and seizures (more focal than generalized). The overarching pathologic feature is ganglionic hemorrhage and CNS inflammation.3 Infection from a peripheral location via the trigeminal or olfactory nerve is the most prominently cited source.4

The diagnosis of HSV encephalitis is suggested by an encephalitic state (fever, nuchal ridigity, altered mental status, focal neurologic deficits) plus results of CSF analysis showing increased WBCs with lymphocytic pleocytosis. The preferred method for the diagnosis of HSV-2 encephalitis is with HSV CSF PCR analysis, which provides the most rapid, accurate, and minimally invasive method for detecting the causative agent of encephalitis in patients with this presentation. In fact, studies indicate that PCR testing of CSF is equivalent in accuracy to brain biopsy, which once was the preferred means of diagnosing HSV encephalitis.4

As in our patient, MRI studies generally demonstrate enhancement consistent with HSV encephalitis, because MRI is more sensitive and specific than CT. As shown in our patient’s imaging results, T2-weighted images are more helpful than T1-weighted images, showing characteristic hyperintensity in the medial temporal lobe. Other modalities such electroencephalography also may support the diagnosis but are less sensitive and specific than MRI.4

High rates of mortality and morbidity can occur with delayed diagnosis and treatment. Without treatment, common sequelae include seizure disorders, changes in cognition, and motor deficits. Treatment of increased intracranial pressure secondary to edema of brain tissue includes elevating the head of the bed and cautious diuresis with furosemide. More aggressive therapy, including mannitol, corticosteroids, and intubation with hyperventilation, also may be indicated. In our patient’s case, intubation with mechanical ventilation and corticosteroid therapy were necessary to control cerebral edema.

Acyclovir is the drug of choice, dosed at 30 mg/kg/day intravenously. Mortality from HSV encephalitis before the introduction of acyclovir was 60% to 70%; since acyclovir has become the mainstay of treatment, mortality is approximately 30%. After a short course of intravenous acyclovir, the patient can be switched to oral valacyclovir for a total treatment time of 14 to 21 days. To reduce the risk of renal toxicity, sufficiently hydrate the patient with 1 mL/day of normal saline for each 1 mg/day of acyclovir.4