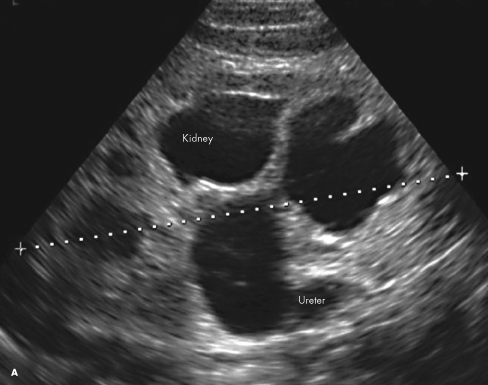 A 3.4-kg girl born to a 40-year-old, gravida 5, para 2 mother at 38 weeks’ gestation by elective cesarean section was hospitalized for evaluation of

bilateral hydronephrosis detected during a prenatal ultrasound examination. There was no history of oligohydramnios during the pregnancy or renal disease in the family. Apgar scores were 8 and 9 at 1 and 5 minutes, respectively. Newborn examination findings were normal.

Ultrasound examination on day 1 of life revealed hydronephrosis of the left kidney and ureter (A) and a ureterocele in the urinary bladder at the base with invagination of the ureter (B). A voiding cystourethrogram (VCUG) showed the ureterocele in the bladder with a Foley catheter in situ (C). 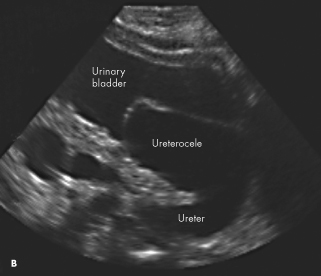 The newborn had complete urinary retention for which she underwent cystoscopy and transurethral incision of the ureterocele. Postoperative ultrasound findings showed some improvement in the hydronephrosis on the left side with regression of the ureterocele; however, the right upper pole remained dilated, even after removal of the Foley catheter.

Baseline laboratory findings, including renal function, were essentially normal before and after surgery. The patient maintained good urine output postoperatively and was discharged. Oral amoxicillin for urinary tract infection (UTI) prophylaxis was prescribed, and outpatient urology follow-up was scheduled.

Ureterocele, a congenital pseudocystic dilatation of the submucosal terminal ureter, is present in either a single or duplicated ureter. The incidence has been reported to be between 1 in 5000 and 1 in 12,000 in general pediatric admissions.1 It is found 4 to 6 times more often in females than in males and occurs more commonly in Caucasians than in other races.2

By virtue of its position, a ureterocele can be classified as intravesical, when the cyst is completely contained inside the bladder, or extravesical (ectopic), when the cyst extends to the urethra or bladder neck.3 About 80% of ureteroceles are associated with the upper pole of a duplex collecting system, and 60% of these are ectopic.3

Ultrasound is the imaging modality of choice for the initial evaluation of ureterocele. Prenatal ultrasound examination can detect most cases; however, ureterocele may be diagnosed later in infancy (eg, during an evaluation for another medical condition, such as a UTI). In infants, ureteroceles most commonly present as febrile UTIs; rarely, they may prolapse and acutely obstruct the bladder outlet.

Additional imaging studies may be necessary to help delineate the anatomy. A VCUG to detect reflux and a dimercaptosuccinic acid renal scan to evaluate kidney function may be performed. Although immediate surgical management is often unnecessary, early diagnosis of ureterocele is important to decrease the risk of urosepsis and renal damage. 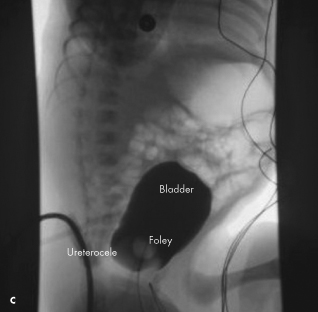 Ectopic ureterocele, in contrast to intravesical ureterocele, generally has consequences for the urodynamic properties of the bladder as well as high morbidity due to UTI, the loss of renal function, and incontinence.4 Management of ectopic ureterocele remains controversial. Transurethral incision is effective in relieving obstruction and in treating bilateral hydronephrosis, particularly in the neonate. Even though reflux can follow an endoscopic procedure, the likelihood of urosepsis is very slight.5

A treatment-free status most often requires ureterocele excision. Children with collapsed ureterocele in situ must continue antibiotic prophylaxis while awaiting corrective surgery. A staged approach with initial transurethral incision followed by excision and reimplantation has been shown to be successful in many cases.6