2 The American Cancer Society estimates that in 2012 cancer will be diagnosed in about 12,060 US children younger 15 years and will be the cause the death of about 1340 children with the disease.2 Although cancer is considered a leading cause of death in children, it is still quite rare in this population. For every 10,000 US children, 1 to 2 will have cancer.

3 While the incidence of invasive cancer in children has risen somewhat over the past 20 years, there has been a significant decrease in deaths from cancer. The 5-year survival rate for childhood cancers has increased from about 50% in the 1970s to near 80% in recent years.1 The improved survival rates can be attributed to advances in treatment, although the rates vary among the different types of cancer.

The incidence for the 2 most common childhood cancers, leukemias and brain tumors, appears to differ slightly from the other types of cancer. After the 1980s, rates of childhood leukemias appear to have remained steady at 3.7 to 4.9 per 100,000. Although the rates of brain tumors showed a sharp increase from 1983 to 1986, they have remained stable ever since. Researchers speculate that the spike was not a true increase in incidence but rather a reflection of better imaging and biopsy technologies and a reclassification of certain “benign” brain tumors as “malignant.”

4 Identifying the risk factors for cancer in children has been difficult. Researchers have long suspected environmental exposures but have been unable to measure levels of past exposure in children (eg, exposures that may have occurred in the womb or prior to conception in the parents). In addition, each type of childhood cancer develops differently and the clinical course is unique.

5 Many possible causes of childhood cancer have been studied over the past several decades (Table). Although the causes of cancer in children are for the most part unknown, research to date has found that certain conditions, such as chromosomal and genetic abnormalities and toxic exposures, are associated with an increased risk of cancer developing at a young age.

Studies have shown that children treated with chemotherapy and/radiation therapy may have an increased risk of a secondary cancer. For instance, alkylating agents or topoisomerase II inhibitors (eg, epipodophyllotoxins) have been associated with leukemia. Like adults with AIDS, children with this syndrome have an increased risk of certain cancers. Non-Hodgkin lymphoma and Kaposi sarcoma are most commonly associated with AIDS; children with AIDS are also at risk for leiomyosarcoma. 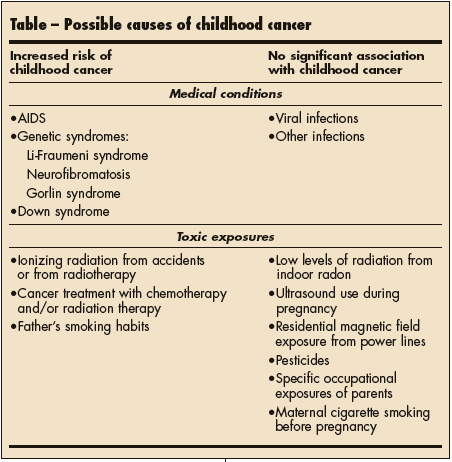 6 Ongoing studies on childhood cancer are focusing on improvements or developments in the following areas:

Identifying risks factors. The Children’s Oncology Group is evaluating potential risk factors for a variety of childhood cancers and has established a Childhood Cancer Research network that creates a national registry of children with cancer. The Childhood Cancer Survivor Study (CCSS) is looking at the risks of second cancers related to radiation therapy and chemotherapy received by survivors of childhood cancer as part of treatment for a primary cancer. Other large studies focusing on specific cancers have been completed.

Monitoring of trends in incidence and mortality rates. By tracking areas with high and low cancer rates around the world, researches can uncover patterns of cancer that may help direct further in-depth studies on the causes and control of cancer.

Understanding the biology of childhood cancer. The Childhood Cancer Therapeutically Applicable Research to Generate Effective Treatments Initiative (established by the NCI) and the Foundation for the NIH are hoping that a better understanding of the biology of childhood cancer will lead to new treatment approaches that target critical cellular processes required for cancer cell growth and survival.

New anticancer drugs. Preclinical studies, such as the NCI-supported Pediatric Preclinical Testing Program, are evaluating new drugs and substances with animal models (animals with a cancer similar to or the same as a cancer found in children). The goal is to find the drugs most likely to have significant anticancer effects in clinical trials.

Health status of survivors. The CCSS, a study coordinated by St Jude Children’s Research Hospital and funded by the NCI, was created to gain new knowledge and to educate cancer survivors about the long-term effects of cancer treatment. The CCSS cohort, assembled through the efforts of 27 participating centers in the United States and Canada, consists of more than 20,000 childhood cancer survivors and about 4000 siblings of survivors who serve as the comparison group for the study.3

Anticancer treatments. The NCI is sponsoring about 100 ongoing clinical trials. These trials are conducted by the following groups:

•The Children’s Oncology Group was formed to accelerate the search for a cure for childhood cancers and to make it possible for children and adolescents with cancer, regardless of where they live, to have access to state-of-the-art therapies and the collective expertise of world-renowned pediatric specialists.

•New Approaches to Neuroblastoma Therapy is a consortium that conducts early clinical trials to test new therapies for neuroblastoma.

•The Pediatric Oncology Branch conducts studies that include analyses of genetic and biological characteristics of childhood cancers, as well as the study of immune system interactions with these cancers and the effects of chemotherapy on the immune system.

Integration of new treatments.
A major part of the NCI’s pediatric drug development program is the Children’s Oncology Group Phase I/Pilot Consortium, which promotes the integration of advances in cancer biology and therapy into the treatment of childhood cancer. The consortium includes about 20 institutions that carefully monitor agents and regimens for toxicity and safety.