Case in Point: “Spells” in a Healthy Child—Evaluating an Apparent Life-Threatening Event

When she was 4 months old, a girl presented to her primary care pediatrician with a history of “passing out.” These episodes reportedly had occurred when she cried or was angry, but her pediatrician did not think the girl’s condition was consistent with breath-holding spells.

The girl had been born at full term. Her birth, medical, surgical, and social histories were unremarkable. There was no history of congenital heart defects among her immediate family members; however, an uncle reportedly had an unknown “heart condition.” The girl’s pediatrician had done a complete workup, including electrocardiography (ECG), echocardiography, 24-hour Holter monitoring, state newborn screening tests and other laboratory tests, magnetic resonance imaging of the brain, and electroencephalography.

The girl had been admitted to the hospital for evaluation of an apparent life-threatening event (ALTE), but the workup had not revealed an etiology for her symptoms. The echocardiogram showed a ventricular trabecular variant (Figure 1) but was otherwise normal, and the girl had been discharged home. 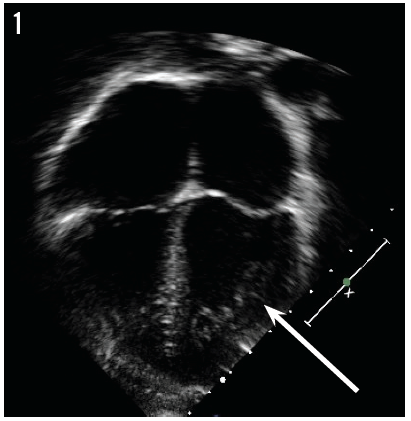 She continued to have these spells nearly every week until the nature of the spells changed at 13 months of age. They began to occur daily and last 4 to 5 minutes each. She also began to show signs of central cyanosis and seizure-like activity. A pediatric cardiologist evaluated the girl, reviewed the initial workup, and repeated the 24-hour Holter monitoring, the results of which again were normal.

Her case was followed in clinic for the next 1.5 years; because she continued to have these “spells” at the age of 3 years, the pediatric cardiologist repeated the Holter monitoring for a third time. This time, the results showed a 20-second asystolic episode that started with a sinus beat and resolved with a sinus beat, with no escape beats (Figures 2A and 2B). After the abnormal rhythm was discovered, the girl underwent placement of a dual-chamber epicardial pacemaker.

She had a routine postoperative course and has been followed up in the cardiology clinic for the ensuing 3 years with no further clinical episodes. Based on the resolution of the clinical spells after pacemaker placement, she received a diagnosis of an overexaggerated vagal response without an escape mechanism. Her pacemaker has had intermittent interrogation, the results of which have shown an infrequent need for pacing. Moreover, the number of episodes requiring pacing has slowly decreased over the years. It has yet to be determined whether she will continue to require a pacemaker or if it can be removed as she ages.

A trabecular cardiomyopathy is a less likely cause of her symptoms in that she likely would have had premature ventricular contractions or arrhythmias documented on ECG or Holter monitoring results. She now is 6 years old and soon will again undergo echocardiography to determine whether the ventricular trabeculations have persisted.

Determining the appropriate evaluation and workup of an ALTE can be difficult. This case illustrates a number of key factors that should raise concern about a more serious underlying pathology. ALTEs are a diagnosis of exclusion: They consist of a combination of apnea, color and muscle tone changes, and choking and/or gagging.1 The occurrence rate for ALTEs is reportedly from 0.6 to 2.46 per 1,000 live births, and ALTEs account for 0.6% to 0.8% of all emergency department visits by children younger than 1 year of age.2 ALTEs are listed as the cause of death in 7.6% of infants,2 and 5% of sudden infant death syndrome (SIDS) cases are preceded by an ALTE.3

Most ALTEs are self-limited and have a good outcome. The cause can be as simple as gastroesophageal reflux or as life-threatening as an infection, congenital heart defect, or nonaccidental trauma (NAT). In more than half of cases, the etiology can be determined after a thorough history, comprehensive physical examination, and review of laboratory test results.4

Gastroesophageal reflux disease is found to be the cause in 30% of ALTE cases, likely due to laryngospasm and subsequent apnea.5 Neurologic disorders, including seizures and breath-holding spells, are the second most common cause, accounting for 5% to 20% of cases.5 Infections are the third most common cause. Infrequent causes include congenital heart defects, metabolic syndromes, and upper airway obstruction. NAT should be in the list of differential diagnoses. ALTEs that require cardiopulmonary resuscitation, occur multiple times in the presence of the same caregiver, or coincide with physical injury are highly suggestive of NAT.6,7 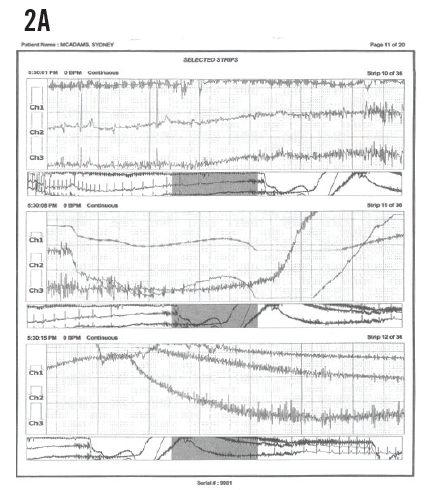 A detailed history and comprehensive physical examination is crucial in the evaluation of an ALTE. One group of researchers could identify the cause of an ALTE in 21% of cases using history and physical examination alone; when combined with laboratory workup results, the percentage increased.8 During the history, it is important to determine whether the patient has had a true apneic spell or had a periodic breathing spell.

The routine laboratory workup of an ALTE may include a complete blood count, a comprehensive metabolic panel, urinalysis, and toxicology testing. If concern for infection exists, blood, urine, and cerebrospinal fluid cultures could be obtained. Some sources suggest performing ECG, echocardiography, or Holter monitoring if a cardiac etiology is high on the differential diagnosis list. A family history of SIDS should prompt a more thorough workup. If NAT is suspected, computed tomography of the head, a radiographic skeletal survey, and an ophthalmologic examination should be performed, along with a social service consultation.

Our patient had normal workup results, so what were the key features of her presentation that indicated a serious underlying etiology? In a recent study, researchers at Children’s Hospital Los Angeles looked at that facility’s tertiary care population and noted the following risk factors for a serious underlying etiology: age less than 1 month old, signs of infection, a history of reoccurring ALTEs, episodes that change over time, signs of central cyanosis, abnormal vital signs, and abnormal state newborn screening test results.9 Another study found similar risk factors.2 Our patient had 3 of these high-risk identifiers: She had reoccurring ALTEs, her episodes changed over time, and she had central cyanosis. Her pediatrician and pediatric cardiologist appropriately continued to look for a cause despite a normal initial workup.

The relationship between ALTEs and SIDS has been the subject of much debate. Some studies have reported that 5% of SIDS are preceded by an ALTE, implying a connection between ALTEs and the risk for SIDS.3 However, newer research has shown no substantial association between the two conditions.2,10 In addition to having different risk factors, the epidemiologies of ALTEs and SIDS differ.2 The number of SIDS cases has decreased since the institution of the Back to Sleep campaign in 1994, while the rate of ALTEs has remained constant. Moreover, ALTEs most commonly happen between 8 am and 8 pm, while SIDS peaks between midnight and 6 am. Compared with cases of ALTE, SIDS cases are more common in families in which the mother is younger. ALTEs have no gender association, whereas SIDS is more common in boys. 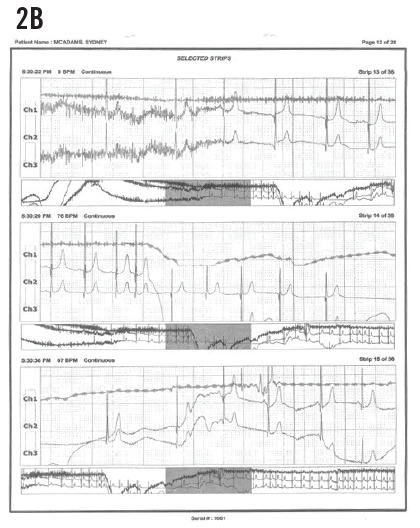 There is ongoing research into the need for hospitalization versus outpatient observation for any child with an ALTE diagnosis. At one time, when ALTEs and SIDS were thought to be related, the standard of care was to admit any child with an ALTE. However, new research indicates that admission may not be necessary.9 In a case series of 59 infants younger than 1 month of age who were seen in the emergency department, researchers assessed the infants’ risk of subsequent episodes and found that 14% of the patients had a subsequent event. They found this subset of children to have at least one risk factor for a more severe etiology of their ALTE.9 More research is needed to determine whether children who have had an ALTE require admission or can be discharged home with close follow-up.

Tamika Rozema, MD, is a pediatric resident at the University of Kentucky College of Medicine in Lexington.

Lindsay B. Ragsdale, MD, is an assistant professor of pediatrics at the University of Kentucky College of Medicine.

Kimberly R. Northrip, MD, MPH, is an assistant professor of pediatrics at the University of Kentucky College of Medicine.

A version of this case report was presented at the 45th Annual Meeting of the Irish and American Paediatric Society in Charleston, South Carolina, September 25-29, 2013.