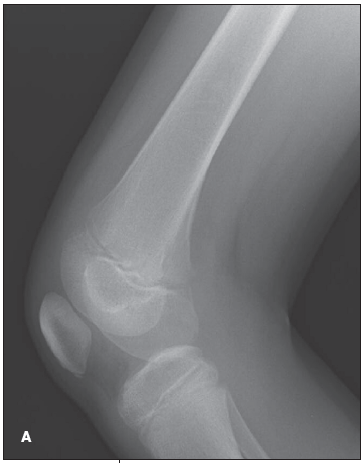 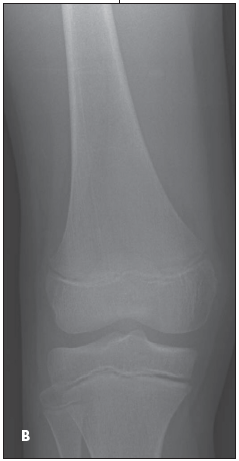 A 10-year-old boy with no medical history was brought to his pediatrician's office with a 2-day history of intermittent fever (temperature of 38.8°C to 39.4°C [102°F to 103°F]). Physical examination results were unremarkable. There was no history of recent trauma. The child was sent home with analgesic therapy.

The child returned to the office 2 days later with continued fever and vague pain in his right knee with ambulation and on palpation. He was referred to our hospital for further evaluation.

Physical examination revealed tenderness on palpation above the right patella, over the distal femur. There was no erythema or swelling. The erythrocyte sedimentation rate and C-reactive protein level were elevated (43 mm/h and 12.5 mg/L, respectively). The white blood cell count was normal (8900/µL), with a differential of 78% neutrophils, 4% monocytes, 9% lymphocytes, and 2% eosinophils.

X-ray films of the patient's right knee revealed mild soft tissue swelling anteriorly over the proximal tibia with no bony abnormality (Figure 1). Although there was no physical evidence of a cat scratch, it was suspected that he may have been inoculated with Bartonella henselae and was suffering from catscratch disease. (The family had recently adopted a kitten.) Staphylococcus aureus infection was the other leading infectious disease under consideration.

An MRI scan with gadolinium was ordered for further evaluation of the vague knee pain. It was performed using a 1.5-T magnet.

The MRI scan of the right knee revealed extensive marrow infiltration with multiple pockets of fluid in the distal femoral diaphysis and metaphysis measuring 7.4 3 1.5 3 1.5 cm. High signal was demonstrated on both T2-weighted fat-saturated and T1-weighted fat-saturated post-gadolinium sequences involving the medullary cavity and the surrounding cortex and periosteum (Figure 2). No subperiosteal fluid collection or fistulas were evident. 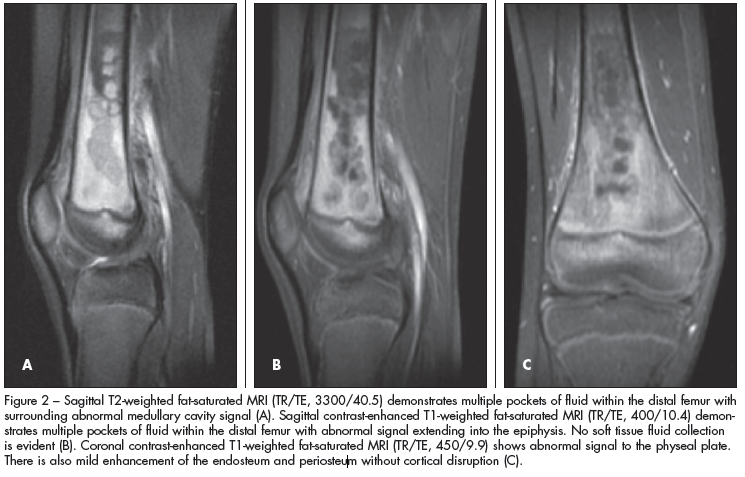 This case illustrates the challenges in diagnosing atypical presentations of osteomyelitis in children. Early differentiation with the proper imaging modalities is vital for prompt and appropriate management.

Osteomyelitis can present in 3 forms: acute, subacute, and chronic. The incidence of acute osteomyelitis is believed to be 1 in 10,000 in healthy children per year. Subacute osteomyelitis reportedly accounts for 8.8% to 42% of primary bone infections.1,2 Acute and subacute osteomyelitis are differentiated by the rapid onset of moderate to severe signs and symptoms, systemic reaction, supportive laboratory data, and a history of trauma or recent infection.

Findings on radiographs in acute osteomyelitis may be subtle; there may be no abnormalities for the first 2 weeks following infection, because 30% to 50% of bone density must be lost before a lucent abnormality is apparent.3 Because of the more indolent nature of subacute and chronic osteomyelitis, patients often have characteristic findings on conventional radiographs. This includes soft tissue swelling, periosteal reaction, cortical tunneling, and focal osteopenia with and without sclerosis. When radiographs do not correlate with the clinical and laboratory findings, further imaging studies should be performed.

MRI has been reported to have a sensitivity of 88% to 100% for osteomyelitis, and a specificity of 75% to 100%.4 MRI is an important imaging technique in pediatric patients for the diagnosis of inflammatory and infectious diseases. Therefore, MRI is indicated if there is a significant history of pain and the radiographs demonstrate no bony abnormality.