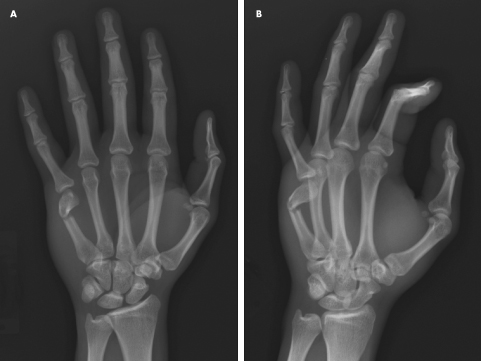 An 18-year-old boy presented to the emergency department with pain and swelling of the left hand and inability to move the fingers. The symptoms had developed after he had punched a wall during an altercation with a friend.

The left arm was placed in a sling, and the pain was adequately controlled with ibuprofen. Radiographs of the left hand showed an angulated fracture of the fifth metacarpal (A and B). The patient was referred to a hand surgeon. The fracture was managed with closed reduction and an ulnar gutter splint, which resulted in an acceptable outcome. Radiographs after splinting showed satisfactory fracture alignment (C and D). The patient refused physician-offered assistance of
social services to address his aggressive behavior.

Boxer’s fracture is named because of its frequent occurrence in inexperienced boxers; it is rare in professional boxers. Boxer’s fracture is one of the most common fractures encountered in the primary care setting and accounts for about 10% of all hand fractures.1 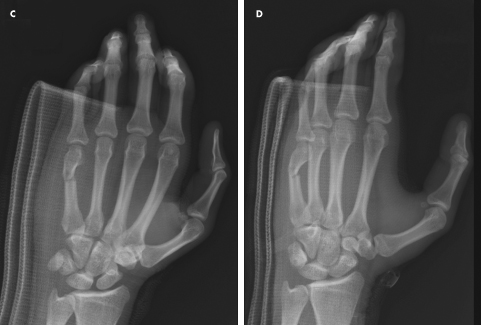 The most common cause of boxer’s fracture is a high-velocity closed-fist strike, although the fracture may result from a fall on a closed fist.2,3 Inexperienced boxers tend to hook their punches, with axial force applied straight to the fourth and fifth metacarpals—the most commonly affected bones—rather than the more stable second and third metacarpals. The fracture is the result of compression force at the weakest point of the metacarpal bone—the neck.

The ideal treatment of boxer’s fracture remains controversial. Options include operative procedures and closed reduction with splinting. One prospective study of 25 patients with fifth metacarpal fracture found that treatment with angulation up to 75º by soft wrap and buddy taping resulted in acceptable outcome at 3-year follow-up.4 In a retrospective study of 59 patients with boxer’s fracture who underwent reduction by longitudinal traction and immobilization in a specially molded cast, about 80% of fracture angulation was corrected within 3 to 4 weeks.5

Complications of untreated boxer’s fracture include decreased grip strength as a result of over-angulation. Splinting or casting done in a position other than the intrinsic plus position may result in contracture at the metacarpophalangeal joint.