A 38-year-old woman, who was 28 weeks pregnant, presented with a 2-day history of worsening left lower quadrant abdominal pain. She had associated nausea, 1 episode of nonbilious, nonbloody emesis on day of admission along with chills, but no fevers. She reported that the abdominal pain was similar in character to her 2 prior episodes of diverticulitis.

The patient reported having normal stools without evidence of melena or hematochezia. She denied vaginal bleeding, leaking of amniotic fluid, or contractions; fetal movement was normal. She was afebrile and vital signs were stable. 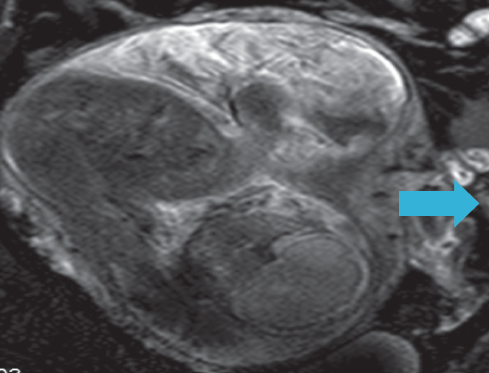 Figure 1. Coronal view of a gravid uterus with the blue arrow showing the area of distal colon inflammation.

Physical exam was remarkable for tenderness of the left lower quadrant to palpation without rebound or guarding. Fetal monitoring was reassuring. Significant laboratory findings included an elevated white blood cell count of 17.4 g/dL with an absolute neutrophil count of 14 g/dL. After an abdominal ultrasound was normal, an abdominal MRI without contrast was obtained (Figures 1 and 2).

Diagnosis. The patient was diagnosed with acute diverticulitis involving the mid-to-distal descending colon without perforation or abscess formation.

Treatment. Conservative management was initiated with NPO, intravenous fluid resuscitation, and IV pain medication. Because the abdominal pain and nausea persisted along with the significant MRI findings, the patient was started on intravenous piperacillin/tazobactam.

Outcome of the case. After 24 hours, patient was pain-free; the abdomen was nontender on exam and the elevated white count was now normal. Her diet was advanced without incident. She was transitioned to oral amoxicillin/clavulanate to complete a 14-day course of antibiotics, which is a safe and effective alternative for treating diverticulitis in the pregnant population unlike ciprofloxacin and metronidazole commonly used for nonpregnant patients with diverticulitis.1 A high fiber diet was recommended.

Discussion. This case highlights the importance of considering non-obstetrical causes of abdominal pain in the differential when caring for pregnant women, and that MRI is a good imaging modality to evaluate the extent of suspected diverticulitis or other intra-abdominal pathology when CT scan is not a first-line choice because of potential harm from fetal exposure to radiation.1,2 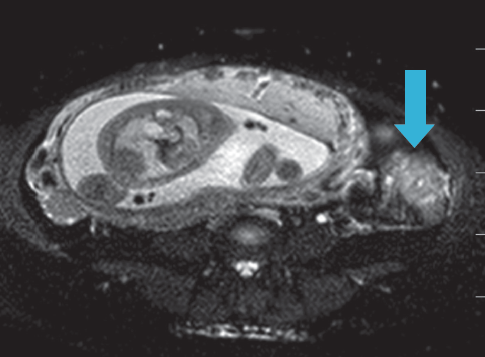 Figure 2. Axial view of a gravid uterus with the blue arrow pointing to the area of distal colon inflammation.

According to the American College of Radiology (ACR), a typical CT scan of the abdomen/pelvis exposes a fetus to 10 mGy to 25 mGy, which is below the 100 mGy associated with developmental deficits for a fetus between 2 to 15 weeks gestational age.3 After 15 weeks gestational age, it is estimated that it takes more than 200 mGy to induce central nervous system defects on a fetus.3 There is an estimated 2% increased lifetime risk for developing cancer for a fetus exposed to 50 mGy if exposed after 15 weeks.3 Expecting mothers should be counseled that exposure to less than 50 mGy for 1 diagnostic test has not been associated with fetal anomalies or fetal death.5

MRI is a nonradiating imaging modality that can be used when ultrasound does not delineate a cause of symptoms while clinical suspicion remains high, as was the case for our patient with abdominal pain. MRI has not been associated with any increased fetal harm at any stage of pregnancy.4 In a committee guideline statement by the American College of Obstetricians and Gynecologists, ultrasound and MRI should be considered as first line imaging tests to minimize fetal exposure to ionizing radiation.5

In regards to IV contrast for diagnostic imaging, both iodinated and gadolinium-based contrast media cross the placenta and have been measured in the fetus. Although there have been no reported adverse outcomes from these 2 types of IV contrast commonly used for diagnostic studies, the risks of these agents on the human fetus are not well understood as there have not been any well-controlled studies on their teratogenic effects.6 There are no reported cases of neonatal hypothyroidism from maternal IV iodinated contrast use.6 There is a theoretical concern that gadolinium contrast may increase the risk for nephrogenic systemic fibrosis due to toxic-free gadolinium ions accumulating in the amniotic fluid, but there are no reported cases to date.6

ACR recommends that iodinated and gadolinium contrast media should be avoided unless the use of these agents is necessary for the care of the mother or fetus, other alternatives are not available, and the mother and ordering physician are aware of the potential risks.6