Systemic lupus erythematosus (SLE) is a chronic inflammatory disease characterized by autoantibody production with multisystem involvement. Approximately 9% to 45% of pediatric SLE patients have central nervous system (CNS) involvement.1 CNS involvement continues to be a diagnostic and therapeutic challenge in patients with SLE. These wide-ranging CNS manifestations can include headache, thrombosis, seizures, and psychosis. Most commonly, seizures and psychosis are the presenting manifestations in pediatric SLE patients.1

A 13-year-old previously healthy girl with a maternal family history of antiphospholipid syndrome (APLS) was transferred from a referring hospital for further workup after presenting with headache, blurry vision, and bilateral papilledema that had been confirmed with magnetic resonance imaging (MRI) and that was concerning for venous sinus thrombosis.

Her headaches had been occurring for 1 year at the time of her presentation, and she described them as a sharp shooting pain with occasional “vision blackouts.” Two months prior to presentation, her headaches had progressively worsened with associated photophobia, phonophobia, and emesis. She was found to have papilledema on funduscopic examination by an ophthalmologist. Findings of computed tomography scans of the head were normal. MRI of the orbits showed findings consistent with intracranial hypertension (IH) (Figure), and magnetic resonance venography (MRV) findings were concerning for superior sagittal sinus thrombosis. She denied taking any medications, specifically oral contraceptives, vitamin A, steroids, and antibiotics.

Upon arrival, anticoagulation was initiated with fondaparinux after clearance by neurosurgery and hematology specialists. Given the significant family history of APLS, a rheumatologist was consulted, and blood was drawn for laboratory workup. 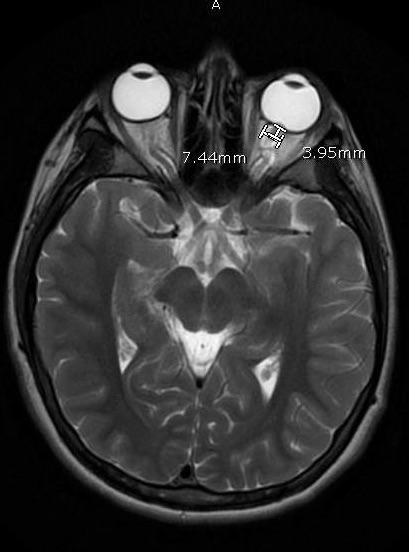 Physical examination. The patient was in no acute distress, with a temperature of 36.8°C, a pulse rate 86 beats/min, a blood pressure of 101/61 mm Hg, and a respiratory rate of 13 breaths/min. Her weight was 47 kg and her height was 158 cm, corresponding to a body mass index of 18.8 kg/m2. Papilledema was noted bilaterally; the pupils were equal, round, and reactive to light, and extraocular movements were intact. Neurologic examination findings were normal, with intact cranial nerves II through XII and normal strength and reflexes. There were no appreciable joint effusions, tenderness, or erythema.

On hospital day 2, a neuroradiologist was consulted to reexamine images from the referring hospital and reported no evidence of venous sinus thrombosis. Thus, fondaparinux was discontinued.

On hospital day 3, the patient’s headaches persisted, along with intermittent blurriness and vision blackouts. Thus, lumbar puncture (LP) was performed, revealing an elevated opening pressure of 36.4 cm H2O. Of note, her laboratory test results did not meet all of the American College of Rheumatology (ACR) criteria for SLE during that time (autoimmune hemolytic anemia, lymphopenia, and thrombocytopenia).3,4 Additionally, given the rarity of IIH as a manifestation of SLE, the lack of other systemic findings on examination, and the contraindication of glucocorticoids in patients with papilledema, she was not started on therapeutic drugs for SLE.

Her symptoms improved after the LP, but she continued to have intermittent vision changes. She remained clinically stable and received a diagnosis of IIH. She was initiated on acetazolamide, 250 mg daily, and was discharged with scheduled follow-up appointments.

Outcome of the case. One month after discharge, the girl presented to an outside hospital with severe anemia (hemoglobin, 3 g/dL). She met the full ACR criteria for SLE (antinuclear antibody, positive at 1:1280 dilution; autoimmune hemolytic anemia; lymphopenia; anti-double stranded DNA, positive; anticardiolipin antibodies (aCL) immunoglobulin M (IgM), positive; lupus anticoagulant (LAC), positive; and arthritis). Infectious workup findings remained negative. She received high-dose glucocorticoids and was started on hydroxychloroquine. Upon discharge, she was urgently induced with rituximab infusion and has remained clinically stable since.

Methods. A retrospective systemic literature search was performed with PubMed using the terms SLE, systemic lupus erythematosus, lupus, pediatric, pseudotumor cerebri, idiopathic intracranial hypertension, and neuropsychiatric lupus. Only pediatric populations were included, and studies that included headaches with pseudotumor cerebri were selected. Studies with an exclusively adult population (>21 years old) or with patients who did not meet ACR or Systemic Lupus International Collaborating Clinics (SLICC) criteria for SLE were excluded. All articles with sufficient data in terms of diagnosis of SLE and/or neuropsychiatric SLE (NPSLE) were selected. Studies that were not related to SLE patients were excluded, as were studies that presented duplicate data.

All of the patients had systemic symptoms prior to presentation. Nine patients (50%) had no records for the presence of antiphospholipid antibodies (aPL), 6 (33%) had normal aPL, and 3 (16%) had positive aPL. None of the patients with positive aPL had evidence of thromboembolism.

The treatment course in the 18 identified cases of IIH associated with SLE varied. Most (17 [94%]) received corticosteroids. One patient (6%) received LP followed by placement of ventricular valve, 1 (6%) received mannitol, and only 4 (22%) received acetazolamide. Most (13 [72%]) of the patients had resolution of IIH, and 3 (17%) relapsed (1 without records and 1 with persistence of papilledema).

IH was first described by Quincke in 1897 as meningitis serosa.19 In 1937, Dandy formulated the diagnostic criteria for IIH, and the criteria were revised in 1985 to the modified Dandy criteria.20,21 Most recently, the criteria were updated to include requirements for pediatric cases and those without papilledema.22 The pathophysiology of IIH remains obscure; however, multiple risk factors have been identified in the adult population such as obesity, polycystic ovary syndrome, postpubertal status, and female gender.23 In the pediatric population, the demographics and pathophysiology of IIH are markedly different than in the adult population, with puberty being a significant factor that separates pediatric and adult IIH.24

Pediatric patients with IIH have an equal sex distribution and a lower incidence of obesity compared with adults,25-27 as evident in our patient’s case. Prepubertal patients with IIH have significantly lower body mass index and a lower predilection for being female than do postpubertal patients.28,29 Other studies have shown no clear racial predilection for IIH.30 Papilledema is the hallmark ophthalmologic sign of IH in the pediatric population, with headache being the most common symptom. Other presenting symptoms include nausea, vomiting, neck stiffness, visual changes, and diplopia.25,31 Multiple factors other than adiposity have been postulated as causes of IIH in the pediatric population, including mineralocorticoid use, alterations in glucocorticoid metabolism, and abnormal regulation of cerebrospinal fluid production.24

Aside from ruling out common causes of IH (eg, brain tumor, malignancy, infection, medication use), in the setting of a patient with suspected underlying SLE, dural sinus thrombosis secondary to APLS must be excluded as a cause of IH. Although strict criteria for APLS have been established for adults, they have not been evaluated in the pediatric population.32 Antiphospholipid antibodies have been found in approximately 65% of children with SLE.33 More specifically, Harel and colleagues34 reported the presence of aPL in 70% of SLE patients, including aCL in 64%, aCL immunoglobulin G in 56%, aCL IgM in 35%, and LAC in 18%. There was significant association of NP events with positive LAC on more than one occasion and significant association between cerebrovascular accident and aCL IgM.34 However, there was no association between aPL and headaches or any other NP events.34 Our patient had positive aCL IgM and positive LAC results at the time of SLE diagnosis at the outside hospital.

Headache is the most frequent neurologic manifestation of NPSLE in children without a previous diagnosis of SLE.2,35 Kaposi first described NP involvement in a patient with SLE in 1872.36 Since then, the ACR has defined 19 different NP manifestations of SLE.37 In the pediatric population, NP manifestations have been reported in approximately 22% to 48% of cases of SLE.35,38-43 Despite being a common symptom, headache remains highly nonspecific and is often associated with other NP manifestations. Given the lack of gold standard diagnostic methods, NPSLE remains a diagnosis of exclusion and relies on expert opinion.44

After an extensive workup, our patient met the criteria for IIH without any associated risk factors having been identified. The pathophysiology of developing increased IH in SLE remains elusive. Various etiologies have been proposed, such as aPL and their implications in vascular occlusion and disruption of the blood-brain barrier (BBB).15 Others have suggested activation of complement system causing migration of leukocytes into the BBB, thereby increasing capillary permeability or absorptive failure of cerebrospinal fluid.7,17 Interestingly, the reported annual incidence of IIH in the pediatric population was 0.00063% in one large city in the US Midwest (Columbus, Ohio),45 while the prevalence of IIH in patients with SLE ranges from 1% to 1.5%,15,46 suggesting that the association between SLE and IIH is not purely coincidental.

IIH remains an uncommon manifestation of SLE, with favorable outcomes.47 The most serious sequela is permanent vision loss, reported in 19% of pediatric patients by Gospe and colleagues.48 Given its association with SLE, a thorough history and physical should be performed in order to better classify the pathology and guide therapeutic interventions. When clinical suspicion is high for possible SLE, a patient not meeting all of the criteria for SLE does not preclude further workup and/or treatment. The criteria were developed to establish a framework for research and should not be superior to clinical judgment.

We report a case of IIH as a presentation of SLE in the absence of systemic symptoms, with maternal history of APLS. In established SLE patients, CNS manifestations occur 50% of the time with no other evidence of SLE activity.49 This patient’s case suggests that IIH can be a rare isolated initial manifestation of SLE. This is important for clinicians evaluating pediatric patients with IIH, who may not normally consider SLE as a differential diagnosis, especially without any other manifestations suggestive of a connective tissue disorder. The association between SLE and IH remains unclear. It is important to distinguish whether increased IH is idiopathic or a manifestation of SLE, since first-line management differs significantly. Further prospective studies are needed in order to conclusively delineate the association and pathophysiology of IIH and SLE.