Use of Steroidogenic Precursors for Evaluation of Adrenocortical Carcinoma in Adrenal Masses: A Case Series

The prevalence of incidentally discovered adrenal masses continues to rise as the use of cross-sectional imaging increases.1 Most of these masses are benign, consisting of nonfunctioning adenomas (80%), mild cortisol-producing adenomas leading to subclinical Cushing syndrome (5%), pheochromocytomas (5%), and aldosterone-secreting adenomas (1%). However, approximately 2.5% of adrenal masses represent metastatic disease, and 5% are adrenocortical carcinoma (ACC).2,3 Given the poor prognosis associated with ACC, early diagnosis and curative resection are critical.2-4 Since most ACC cases are functional, the use of adrenal steroid precursor hormones such as 17-hydroxyprogesterone (17-OHP), androstenedione, 11-deoxycortisol, and 11-deoxycorticosterone can assist in expediting time to diagnosis of ACC.2,3

Hormonal evaluations of all 3 of the following patient’s cases are summarized in the Table. 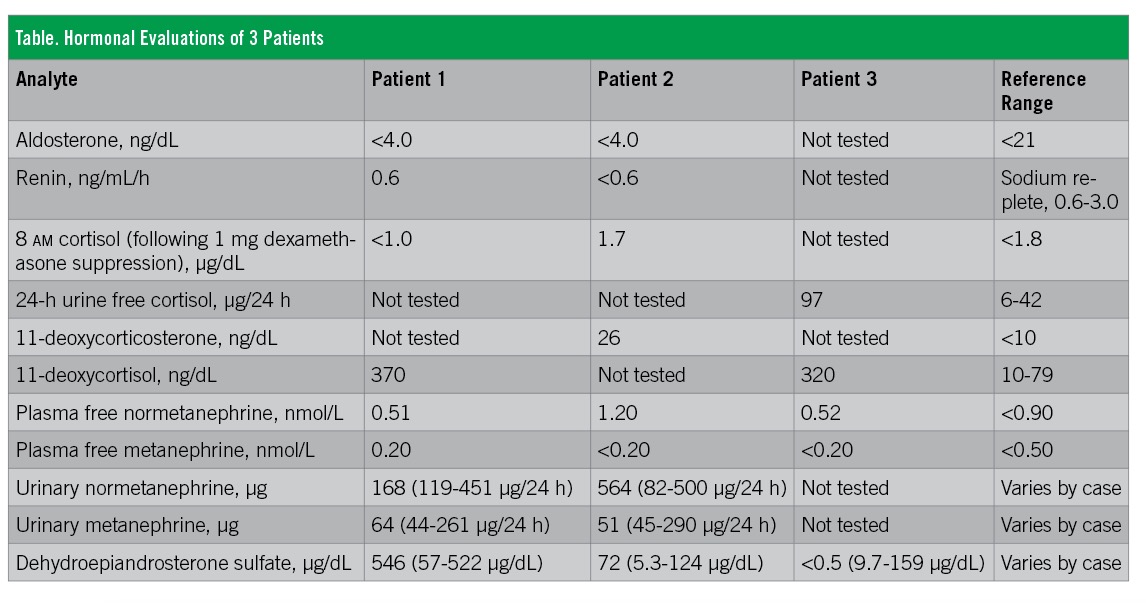 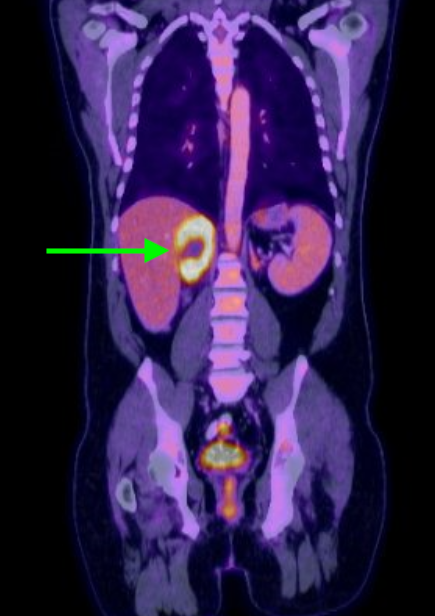 Figure 1. PET/CT image of patient 1, with the arrow pointing to a hypermetabolic 5.6 x 4.4-cm right adrenal mass with central necrosis. 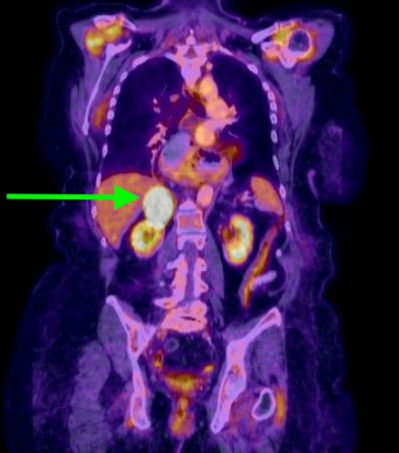 Figure 2. PET/CT image of patient 2, with the arrow pointing to a hypermetabolic 4.7-cm right adrenal mass. 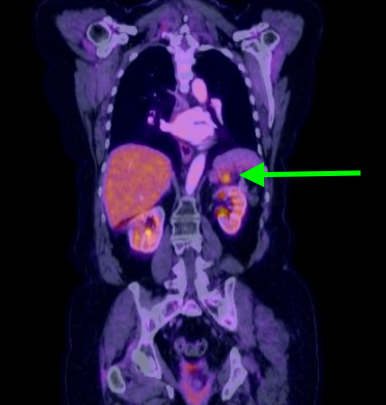 Figure 3. PET/CT image of patient 3, with the arrow pointing to a hypermetabolic 4.5 × 3.2 cm lobulated soft tissue mass in the posterior left upper quadrant, within the left adrenalectomy bed.

While ACC occasionally develops as part of hereditary syndromes, most adult-onset cases are sporadic, accounting for approximately 1 to 2 cases per million per year.2,3 The prognosis of ACC is poor, with a median survival rate of 3 to 4 years.2,5 However, 5-year survival increases to 60% to 80% for tumors confined to the adrenal gland, since complete surgical resection is the only curative treatment.2,6 Since 5-year survival decreases to 0% to 28% in metastatic disease, early detection and diagnosis is imperative.2

In the 3 cases discussed here, hormone evaluation was notable for elevated 11-deoxycortisol levels in 2 patients and an elevated 11-deoxycorticosterone level in the third patient. Approximately two-thirds of ACC cases are hormonally active,3,5-7 While hypercortisolism is estimated to be present in 50% to 80% of functional ACCs, defects in steroid biosynthesis enzymes can also lead to inefficient end hormone production and buildup of steroid precursors.5,6 Clinical features of ACC can include rapid development of hypercortisolism symptoms including hypokalemia or muscle weakness, androgen excess such as hirsutism or virilization in women, or estrogen excess leading to gynecomastia in men or postmenopausal bleeding in women.2,3,8,9 Hypokalemia with hypertension is commonly observed and is usually due to overproduction of mineralocorticoid precursors such as 11-deoxycorticosterone or activation of mineralocorticoid receptors through 11β-hydroxysteroid dehydrogenase by excess cortisol.6 Less than 1% of all ACCs produce aldosterone.

Certain hormone patterns, such as cortisol overproduction or co-secretion of cortisol and androgens, can raise suspicion for functional ACCs.5 Likewise, although rare, the presence of estrogen secretion in men or postmenopausal women is highly suggestive of ACC.9 Steroidogenic precursors, such as 17-OHP, 11-deoxycortisol and 11-deoxycorticosterone are not part of the standard adrenal mass workup but can be useful in evaluating for ACC when suspicion is high.2,7

In some cases of ACC, exclusive steroid precursor secretion with ineffective steroidogenesis can cause tumors to appear nonfunctional if hormonal testing is limited to standard testing for cortisol, aldosterone, or metanephrine overproduction.3 Using liquid chromatography with tandem mass spectrometry (LC-MS/MS), one study used a 13-steroid panel to evaluate steroids and their precursor levels in 10 cases of ACC compared with pheochromocytomas, cortisol-producing adrenal adenomas, and nonfunctional adenomas.7 The researchers noted that 11-deoxycortisol was significantly elevated in all cases of ACC, and that a combination of steroid precursors such as 17-OHP, 11-deoxycortisol, 11-deoxycorticosterone, 17-hydroxypregnenolone, and androstenedione, in addition to cortisol and dehydroepiandrosterone sulfate, can further distinguish ACC from non-ACC adrenal masses.7