A 37-year-old woman with no related medical history presented to the clinic with right-sided neck swelling. She reported having had swelling in the area for approximately 6 years, but she had recently noted an increase in size and associated symptoms of eye pain, pain radiating from the area, and dysphagia.

The patient denied sick contacts, changes in diet or lifestyle, chest pain, shortness of breath, abdominal pain, weight loss, joint pain, fevers, and chills. Of note, she initially had presented to an emergency department with a similar presentation. At that time, she had received a diagnosis of a neck mass of unspecified etiology, prescribed naproxen, and directed to make a follow up visit with her women’s health provider.

Neck ultrasonography was performed, which showed a 0.9 × 0.7-cm nodule in right thyroid lobe, Thyroid Imaging Reporting and Data System (TI-RADS) category 4, with right cervical lymphadenopathy. Thyrotropin and thyroxine levels were within normal limits. The erythrocyte sedimentation rate was elevated at 67 mm/h, and results of an HIV test were negative. Results of QuantiFERON-TB Gold test were positive for Mycobacterium tuberculosis infection.

Subsequently, computed tomography (CT) scans of the neck and chest were performed, which showed right cervical lymphadenopathy with central necrosis at multiple sites and adenopathy in the bilateral hilar regions, mediastinum, and upper abdomen (Figure 1). 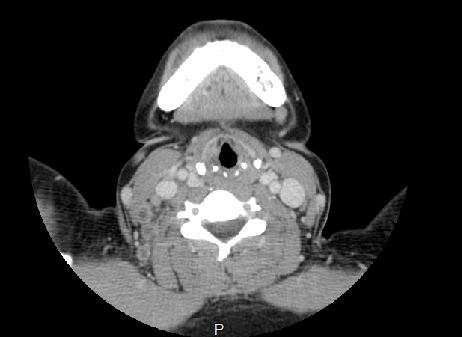 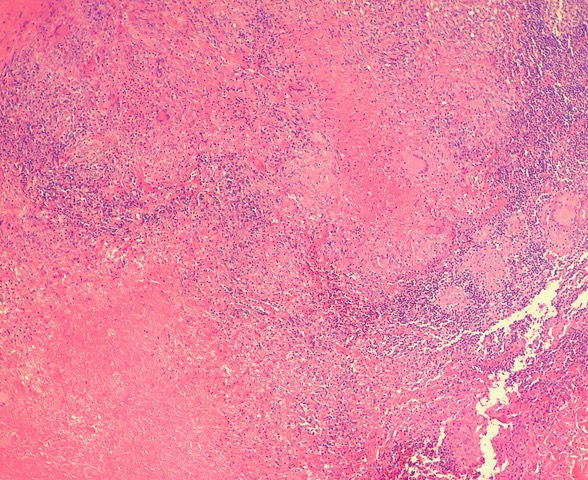 She was subsequently started on rifampin, isoniazid, pyrazinamide, and ethambutol (RIPE) therapy. Lymph node biopsy cultures were negative for M tuberculosis at 6 weeks despite positive AFB results on the initial biopsy.

Discussion. Cervical TB lymphadenitis is the most common presenting form of TB lymphadenopathy in countries with a low prevalence of TB.1 When it involves cervical lymph nodes, it is known as scrofula. It also can involve axillary, mesenteric, mediastinal, hepatic, portal, perihepatic, and inguinal lymph nodes.2 In 2018, 9029 new cases of TB were reported in the United States.3 Past studies have estimated that 18% of cases present as extrapulmonary TB, with 30% to 40% of cases being lymphatic.4,5

Cervical TB lymphadenitis can be an elusive diagnosis, as in our patient’s case, which necessitates considering other etiologies such as nontuberculous mycobacteria, toxoplasmosis, tularemia, fungal diseases, Bartonella henselae infection, sarcoidosis, and neoplasms.1 This patient’s case featured clinical and radiologic findings suggestive of TB lymphadenitis, including lymph nodes with central areas of necrosis on CT imaging, but cultures were negative for an organism at 6 weeks. Studies have shown that the diagnostic yield of mycobacterium cultures can be low and have a large range, from 10% to 69%, but negative results should not exclude the diagnosis of cervical TB lymphadenitis.1,6 Our patient was also a relatively young woman, fitting the demographic for TB lymphadenitis shown in previous studies.6,7

No polymerase chain reaction testing was performed on this patient, but it may have identified the etiology. In this scenario, the patient could have had a tuberculous or nontuberculous mycobacterium infection. Despite negative cultures, symptoms and imaging findings pointed toward TB lymphadenitis, and the patient was treated with RIPE therapy.

Cervical TB lymphadenitis remains an elusive diagnosis, so a high index of suspicion should prompt a complete physical examination; radiological evaluation and biopsy should be considered as in our patient’s case.

ACKNOWLEDGEMENTS:
We thank Xinlai Sun, MD, from the Department of Pathology, Immunology, and Laboratory Medicine at the New Jersey Medical School, Rutgers University, for supplying the pathology images and for confirmation of AFB-positive bacteria in the tissue biopsy. We also thank the Department of Radiology at Newark Beth Israel Medical Center for the CT images.