Transient Pigmentary Lines of the Newborn

A 2-month-old African American girl presented for a routine well-child visit. Her parents had noticed brown horizontal lines across her abdomen that had been present since birth.

History. The infant had been born at full term without complication after an uncomplicated pregnancy. Her birth weight was 2.7 kg. She had no other pertinent medical history except for a hospitalization for an acute urinary tract infection with fever at 10 days of life. At that time, findings of imaging studies and a voiding cystourethrogram were normal. She successfully completed a course of antibiotics. She had been feeding and growing well and was developmentally appropriate. There was no family history of similar dark lines appearing in the newborn period.

Physical examination. On physical examination, the infant was well appearing and interactive. She was normocephalic, with normally set ears and without dysmorphic facial features. Her lungs were clear to auscultation, with symmetric chest wall expansion. Cardiovascular examination showed normal heart rate, in regular rhythm and without murmurs. Her abdomen was soft, nontender, and nondistended. She had normal genitalia for age and sex. She had normal range of motion, with normal strength and no head lag. She responded to stimulation, had a symmetric Moro reflex, positive suck reflex, and positive palmar grasp reflex. Her skin was dry, with some postinflammatory eczematous patches over her bilateral cheeks.

The skin over the infant’s abdomen showed half-circumferential hyperpigmented lines over the abdominal creases (Figure). The hyperpigmentation spared her back and extremities. Her umbilicus had hyperpigmentation changes, as well. There were no other significant cutaneous findings. 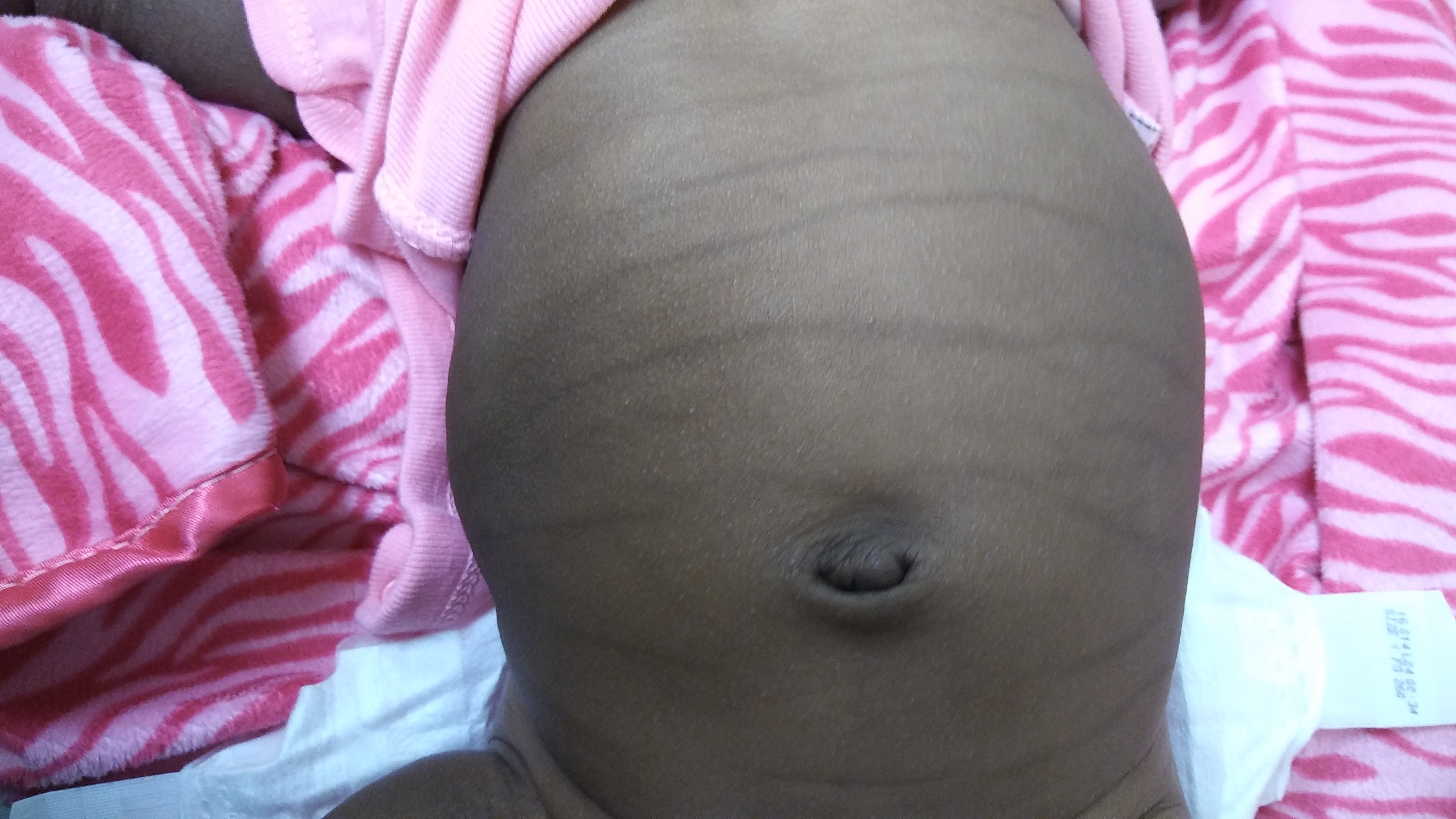 Discussion. Transient pigmentary lines of the newborn is a rare but benign skin condition that self-resolves within 2 to 6 months.1 This hyperpigmentation of the skin typically appears at birth or shortly thereafter and often involves the abdomen, back, and extremities. Gibbs described a first case of pigmentary lines located on the abdomen in a black male infant in 1967.2 The infant had been born with ichthyosis vulgaris, which had resolved and left behind hyperpigmented lines across the abdomen. These dark lines resolved within 4 months.

Most infants affected by transient pigmentary lines of the newborn are otherwise healthy and have no associated genetic conditions. The condition occurs more commonly in black or dark-skinned individuals.1 Although the underlying etiology remains unclear, it has been hypothesized that friction accentuated by the flexion as a fetus causes hyperkeratosis within the skin folds, leading to hyperpigmentation.1-3 The cause is not hormonal.1-3 Familial inheritance patterns have not been associated with this condition. However, a few reports have documented a family history of similar hyperpigmentation.1

Since infants can be affected by multiple conditions that alter skin pigmentation, it is important to keep a broad differential diagnosis in mind.2 Pigmentary demarcation lines have also been observed in newborns and can be categorized into types A through E based on their location on the body. All 5 types have been noted in newborns. The type B pigmentary demarcation line, seen in the posteromedial portion of the lower limb, is more common in dark-skinned infants.4

Other transient hypermelanoses of the newborn can mimic the appearance of transient pigmentary lines. These lines are hypothesized to arise from the influence of sex hormones before birth and from the immaturity of the pigmentary system at birth. Typical areas affected by hyperpigmentation include the dorsum of the fingers and the genital area.5

Segmental hypermelanosis is another condition that presents early in life and appears as a single hyperpigmented macule in a segmental pattern. The macule can follow a dermatome or present along a line of Blaschko, which gives it a linear appearance. It may continue to enlarge proportionally as the skin expands, does not self-resolve, and can be associated with more serious genetic conditions.5 Typically, the aforementioned hyperpigmentary conditions can be differentiated from transient pigmentary lines of the newborn by the shape, size, and distribution of the hyperpigmented area.

The diagnosis of transient pigmentary lines is clinical, and no laboratory and imaging studies are necessary. No treatment is needed. Parents should be reassured that the hyperpigmented lines will spontaneously resolve in several months without scarring of the skin.

Outcome of the case. Our patient presented back to the clinic for her 4-month well-child visit. At that time, the linear hyperpigmented lines were still visible but were lighter.